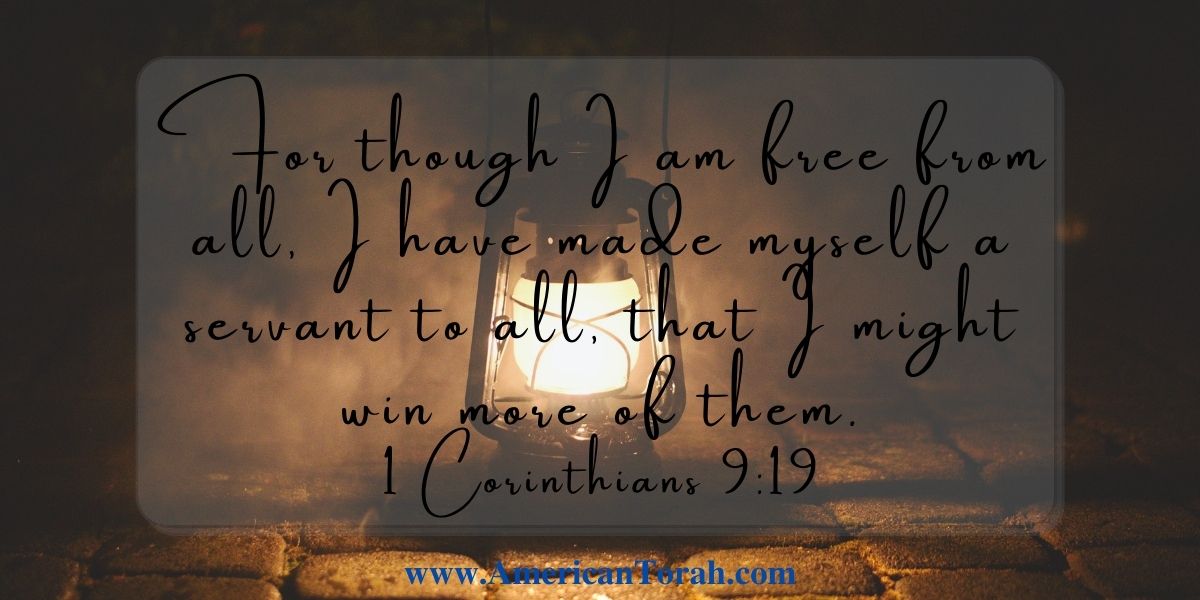 During a lengthy argument between pronomians and antinomians in an online forum, one Torah-keeper asked “Why did Paul go with other Christian brothers and sacrifice sheep at the Temple?”

Someone on the other side of the argument replied…

In other words, NorOb believes that Paul was a good actor. He was just pretending to do Jewish things to trick the Jews into thinking he was just like them. When Jews complained that Paul was teaching other Jews to abandon Torah, he took a Nazirite vow and made a blood sacrifice at the Temple, paying for several other men to do the same thing to demonstrate that those Jews were in error. If NorOb’s interpretation is correct, then Paul only did this to pretend that he still kept the Law. As soon as he was back among gentiles, he resumed eating pork chops.

This is not a reasonable interpretation. Once again, it is a misunderstanding based on one statement taken out of its original context. Here’s the same verse with the surrounding text:

Unless NorOb is a true antinomian and libertine, I seriously doubt that he believes that “I have become all things to all people” means Paul fornicated in order to witness to fornicators. He didn’t starve himself and cause his muscles to atrophy so that he could become weak in order to win the weak over to Christ. His intended meaning should be very clear to those who have done actual street ministry or door-to-door witnessing.

Paul didn’t become lawless so that he could win the lawless or legalistic to win the legalistic. Instead he did the same thing that Yeshua did with prostitutes, tax collectors, fishermen, and rabbis: he spoke to them where they were and in terms they could understand. He did not pretend to be something he was not. In order to convince deeply religious Jews that Yeshua is the Messiah, Paul wrote of the priesthood and tabernacle (the Letter to the Hebrews, probably). In order to introduce Greeks to the Creator, he spoke to them of their own Unknown God (Acts 17:21-34).

I am certain that Paul did not mean what NorOb asserted, and Paul himself confirmed it. First, in the very same passage, Paul said that he did not operate outside of God’s Law.

Second, only a few sentences later, he wrote that he kept his body under strict discipline so as not to compromise his witness.

But I discipline my body and keep it under control, lest after preaching to others I myself should be disqualified.
1 Corinthians 9:27

In other words, he strictly monitored and controlled his own behavior so that nobody would have cause to call him a hypocrite. He was consistent in lifestyle, morality, worship, and theology, not changing his behavior based on the company at hand. Paul called Peter on the carpet for the very thing that NorOb accused him of:

But when Cephas came to Antioch, I opposed him to his face, because he stood condemned. For before certain men came from James, he was eating with the Gentiles; but when they came he drew back and separated himself, fearing the circumcision party. And the rest of the Jews acted hypocritically along with him, so that even Barnabas was led astray by their hypocrisy. But when I saw that their conduct was not in step with the truth of the gospel, I said to Cephas before them all, “If you, though a Jew, live like a Gentile and not like a Jew, how can you force the Gentiles to live like Jews?”
Galatians 2:11-14

Third, he said that he remained a Pharisee in regards to the Law his entire life. He always kept the Law no matter where he was or who was watching.

My manner of life from my youth, spent from the beginning among my own nation and in Jerusalem, is known by all the Jews. They have known for a long time, if they are willing to testify, that according to the strictest party of our religion I have lived as a Pharisee.
Acts 26:4-5

Either Paul lied to Agrippa or else he continued to live as a Pharisee at all times during his many missionary trips among both Jews and Gentiles recorded in the book of Acts.

It is abundantly clear from Paul’s own extensive testimony that he did not sacrifice at the Temple only so that he could appear to be a Jew in the eyes of other Jews. He sacrificed at the Temple because he really was a Torah-observant Jew in every way and continued as such throughout his entire life.