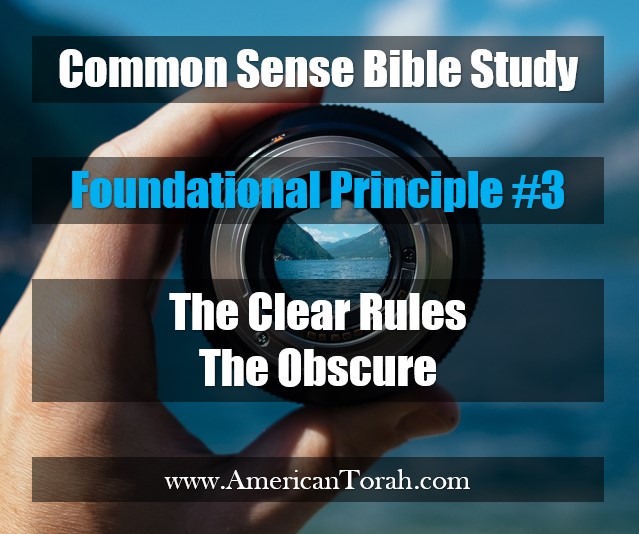 For on the one hand, a former commandment is set aside because of its weakness and uselessness.

At face value, this verse seems to be saying that some old commandment was weak and useless, so God threw it out, but which commandment? It is generally assumed that it’s talking about the Old Covenant, including the Law of Moses. Most people believe it’s only the ceremonial laws pertaining to the Levitical priesthood that were weak and useless, while others believe it was the entire Law of Moses.

But is that really what this verse is saying? If we look at the context of the whole Letter to the Hebrews, it seems like a plausible explanation.

So a former commandment is set aside because of its weakness and uselessness, because the law can’t make anything perfect.

Former priests died, made daily sacrifices, and were weak in themselves. But Jesus guarantees a better covenant, because his priesthood was established by an oath from God, he lives forever, and sacrificed himself once for all time.

Now, that summary might seem a little confusing, but I honestly think the original is even harder to understand.

The writer of Hebrews assumed that his readers already possessed substantial knowledge of Jewish tradition and Levitical law, something that very few Christians in any age could claim to have. I’m a decently intelligent guy who’s been studied Torah for nearly 20 years, yet I still struggle to make sense of much of this book.

Anyone who tells you that Hebrews is straightforward is selling snake oil.

At no point does the writer spell out exactly what he means by “the former commandment” in verse 18, though it seems clear it must have something to do with the Levitical priesthood. What does he mean by “weak and useless”? Didn’t the divine presence rest in the Tabernacle while Aaron and his sons offered their sacrifices there? Surely God wouldn’t give the Israelites weak and useless rules for his personal house in Israel! Paul himself wrote that “the law is holy, and the commandment is holy and righteous and good” (Romans 7:12). God isn’t a politician to make useless laws to appease the masses.

The third fundamental rule of interpreting the Bible is this: the clear interprets the obscure, and never the other way around. If one or more passages makes a very clear statement about a topic, while another passage makes a convoluted or ambiguous statement about it, the clearer passage should normally take precedence.

(In practice, we also have to take into account the context, format, and intent of each statement. For example, we can expect a legal judgement to be quite clear, while a personal conversation might involve hyperbole and sarcasm which doesn’t always translate well across in print and across languages. Such personal communications are usually much easier to take out of context and misinterpret. Poetry must be treated as even further removed from the literal.)

Are there clear passages that talk about the strength and usefulness of the Levitical priesthood or its durability?

There are many, many more statements like these scattered all throughout Scripture, in both the Old and New Testaments. According to hundreds of passages, the Law is personally and nationally transformative and enriching, the rituals of the priesthood and the priesthood itself are enduring, as well as preserving the lives of the priests, atoning for the sins of the priests, the nation, and the individual, and enabling God’s presence among the people.

There is nothing about the Law of Moses that is weak or useless!

If it doesn’t mean that the Law or the Levitical Priesthood were weak and useless, it seems to me that there is only one reasonable interpretation that doesn’t make the text hopelessly convoluted.

Hebrews 7:18 means that the Levitical Priesthood and the sacrificial system of that law was weak and useless for attaining eternal salvation. That was never its purpose! For this, we need a better covenant with a different kind of priest to mediate it. We can’t earn eternal salvation through the blood of bulls and goats, but we can through the blood of the perfect Son of God! There is one law that pertains to the daily sacrifices, Yom Kippur, and the appointing of the sons of Aaron, and there is another law that pertains to the one, eternal sacrifice for all our souls, and the appointing of the ultimate High Priest in Heaven.

The Sinai Covenant isn’t thrown in the dustbin because we have a new covenant. Paul wrote that “Even with a man-made covenant, no one annuls it or adds to it once it has been ratified (Galatians 3:15).” It’s merely relegated to its proper place, which is as a witness against sin, a judge of sinners, and a guide for righteous behavior.

The Clear Interprets the Obscure

Sometimes this rule is given as “The Explicit Interprets the Implicit.”

A great many passages in the Bible can be confusing or deceptively simple when taken on their own, but no passage exists alone. Every word must be understood in light of every other word, and the obscure must always be subordinate to the clear.