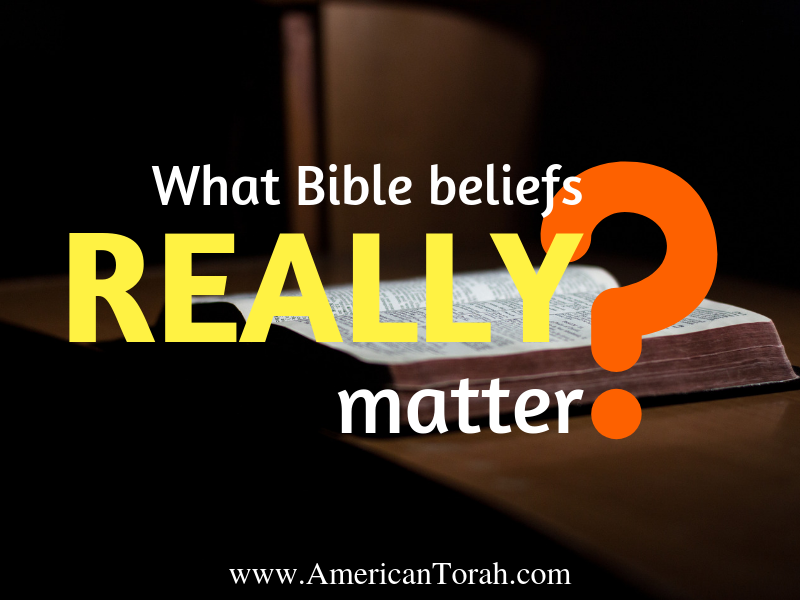 And what beliefs don’t?

I’m probably about to offend you. I don’t mean to, it’s just that there are things that need to be said, and those things won’t set easily on many. Everyone has beliefs that they hold so strongly that they get angry when they are challenged, that they will fight to protect. This is especially true when it comes to beliefs about the things that give our lives meaning.

Although the idea that religion is the cause of most wars is a myth invented by atheists who held propaganda value higher than factuality, religion has always been a contentious topic. People have been fighting over religion and doctrine since the very beginning, even to the point of being willing to snuff out millions of lives to promote one belief over another.

Jews killed Christians. Roman pagans killed Christians and Jews. Christians have even killed fellow Christians over esoteric theologies that were based more on human imagination than any divine revelation. In fact, the very first murder was over a religious difference. Abel’s offering was accepted by God and Cain’s wasn’t, so Cain killed Abel.

But few beliefs are all that important. Even among beliefs that we would never commit murder over, some matter more than others, and some hardly matter at all.

Let me propose a rule of thumb for judging the relative importance of a religious belief: Does it change what you do, how you live, or how you treat other people? If not, then you need to seriously consider whether it’s worth getting into an argument or an emotional bind over.

I want to give you a few examples of beliefs that don’t matter very much and some that matter somewhat more, but I need to ask you to set your ego aside first. Don’t rush to judgment, don’t assume more than what I have written, and accept the undeniable fact that you might be wrong about a whole lot of stuff.

Here’s why I want you to slow down while you read this:

Here are a couple of beliefs that are unlikely to have much impact on how you behave toward God, your neighbor, or even yourself:

The Trinity or No? Is God a single, indivisible entity, or is he three distinct persons in one being? People have been excommunicated, disfellowshipped, tortured, and killed over this question, but–other than how unbalanced people react to disagreement–I can’t even imagine how believing one or the other can have any real affect on your life. The anatomy of God is hinted at in Scripture, but is never spelled out clearly. Ultimately, we have less hope of understanding the structure of God as an ant does of becoming a neurosurgeon.

Predestination or Free Will? Calvinism vs Arminianism is the soap opera of theological debates. There’s a new episode every day. Probably thousands of them. Forever. Those aren’t the only two camps, of course, and the extent and nature of predestination held in each camp varies significantly, depending on who you ask.

Some people will choose (or not) a thoroughly immoral life and blame it on destiny. If we are automatons, then I can do whatever I want, because I have no control anyway. Other people do the exact same thing, while claiming they’re exercising their freedom to rebel against God.

I don’t think I have ever encountered a person whose life was change in any significant way because he believed in either predestination or free will. People appear to be moved to act or to choose to act in exactly the same manner, regardless.

There are many other such questions, but I think you understand my point, so I don’t need to see how many more angels I can cram onto it. (Bonus points if you understood that reference!)

On the other hand, there are many beliefs that do have a direct impact on how we live. If you hold one of these beliefs, then your life is different than if you did not hold it. You think differently and serve God differently; you are kinder or meaner to that irritating neighbor who talks too much. These are the beliefs on which we act.

Is the weekly Sabbath on the first day of the week or the seventh? Does the Sabbath apply to believers in Yeshua at all? These might seem like relatively unimportant questions, but you can’t deny that what you believe about them will have a real–and sometimes dramatic–impact on how you live. You will keep the Sabbath or you won’t. You will keep it with a holiness church on Sunday or you will keep it with a Messianic synagogue on Saturday or some other congregation. If you believe contrary to the majority opinion in your society, you will quickly discover how strongly you believe it.

Is the earth a sphere or a relatively flat disk? Amazingly enough, belief in a flat earth is on the rise in recent years. I have seen–and sometimes joined–numerous “debates” on this topic in online forums, and almost inevitably, some well-meaning soul will attempt to make peace between the sides by pointing out that whether the earth is flat or round has no significant impact on how anyone lives and no impact at all on anyone’s salvation. So why fight about it?

Before the advent of modern geometry, astronomy, physics, geology, cartography, and aeronautics, I would wholeheartedly agree with that assessment. Unfortunately the proponents of a flat earth must also believe that uncountable millions of people are actively involved in a conspiracy to hide the shape of the earth from the rest of humanity. Scientists and engineers in numerous disciplines provide fake, computer-generated evidence of a spherical earth and a vast universe beyond the atmosphere. Shipping and airline crews, business people, and athletes who cross the South Pacific every day are all lying about it. Travel agents advertise impossible flights. The United Nations maintains an enormous fleet to keep anyone from approaching the great ice wall that circles the world.

A person might be paranoid if he believes the earth is a sphere, but he would have to be paranoid, delusional, or both to believe it’s a disk. He would be guilty of false witness on a grand scale, or else he would have to be egotistical enough to believe he exists in a world like Truman Burbank‘s. I know that’s harsh, but I cannot see any way around the fact of it, and I have witnessed the truth of it many times. Flat-earthism has a profound negative impact on the social and spiritual lives of people who adopt it.

The tithe is mandatory or a good example to follow or a total waste of time. Whatever you believe about it, that belief will affect how you use your resources. Will you give to your local church or synagogue or some other charity? Will you share your garden produce with the Cohen family down the street? Your beliefs about the tithe will change how you see what God has given you and what you decide to do with it.

Humans bear the Image of God. If you believe that every single person you meet is a shadow of the Creator, you will look at the toothless beggar behind the dumpster and see God somewhere beneath the crud, and you will treat him differently than if you did not believe it.

What does it mean to love God with all your heart, soul, strength, and mind? If you have some idea of an answer, then your behavior will be measurably different than if you didn’t. You might spend more time in prayer, you might talk to people about God, or you might make an effort to keep his rules for living. You will certainly express more love for your neighbor. How you believe you are to love God is a profound matter that will impact every aspect of your life.

If I haven’t stepped on your virtual toes at some point in this essay, I will be surprised. As I wrote at the start, I haven’t set out to offend anyone, but offense is inevitable when discussing those religious beliefs around which people tend to build their identities.

Perhaps that is the ultimate problem: we have identified with our dogmas rather than with our Creator and his people, Israel. On some level, the truth always matters. All truth is from God or else within God who is infinite. For that very reason, we also have to recognize that most of the truth in the universe is probably unknowable.

The secret things belong to YHWH our God, but the things revealed belong to us and to our sons forever, that we may observe all the words of this law.
Deuteronomy 29:29

It’s fine to talk about and even to debate almost any topic in the right circumstances, but we need to be careful about what we allow to disrupt our relationships. Whenever we feel the tension rising in a doctrinal discussion, we need to ask ourselves what Bible beliefs really matter relative to others? We need to keep all things in good perspective, weighing the value of establishing a particular truth with the value of the relationships and impact on our lives.

Love God with all your heart, soul, strength, and mind. Love your neighbor as yourself. Fear God and keep his commandments. All else is debatable.