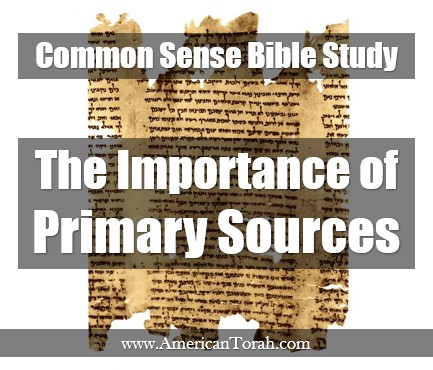 Let’s pretend for a moment that there’s a newspaper out there that employs unbiased reporters and never confuses reporting with opining. I know that’s a stretch, but let’s pretend anyway. We’ll call it The Daily Truth.

If you want to know what’s been going on in Congress you have four choices:

Now, the Opinion page will certainly have content relevant to current events and even to specific and important political issues, but opinions aren’t facts. If you want to know what actually happened as opposed to what some pundit thinks about what happened, you only have two reasonable options: the Congressional Record and the Politics section of The Daily Truth, and most of the Politics section is probably written by people who don’t have any first-hand knowledge of the events they’re reporting.

So, if you want to get the bare facts–or as close to the facts as possible–then you have to go to the primary sources.

What is a primary source?

A primary source is a record of events by someone with first-hand knowledge. Examples include meeting minutes, personal diaries and letters, and first-hand accounts of historic events.

A secondary source is opinion about a primary source. Examples include most news articles, history books (not written by witnesses), academic papers, documentary videos, and commentary.

Secondary sources can be interesting and informative, but they will never be anything more than opinion about someone else’s reporting of the facts. If you want to know the actual facts, and not opinions, you have to go to a primary source.

Of course, that doesn’t mean secondary sources are useless.

All translations of primary sources are, to a great extent, secondary sources, because translations are always affected by the knowledge and biases of the translator. Many words in one language have no direct equivalents in other languages, and sometimes the same word can have multiple meanings. If you were to translate a personal letter from Russian to English, you would have to make some guesses about what the author meant by some phrases. You would have an even harder time with translating across very different cultures in different eras.

Dictionaries, encyclopedias, commentaries, etc., are almost always secondary sources and can have huge disparities in their reliability.

The solution is to consult primary sources whenever possible and to consult several secondary sources when necessary. Make it your habit to compare Bible translations, Hebrew and Greek dictionaries, and commentaries. Over time, you will cultivate a good feel for which of these resources are reliable, which are interesting, and which are safe to ignore completely.

Even then, remember that the most reliable secondary source is still someone’s opinions about a primary source. They might be excellent opinions, but they’re still just opinions.

See this guide from the University of Massachusetts Boston for more information: description and examples of Primary vs Secondary Sources.

One Reply to “The Importance of Primary Sources”