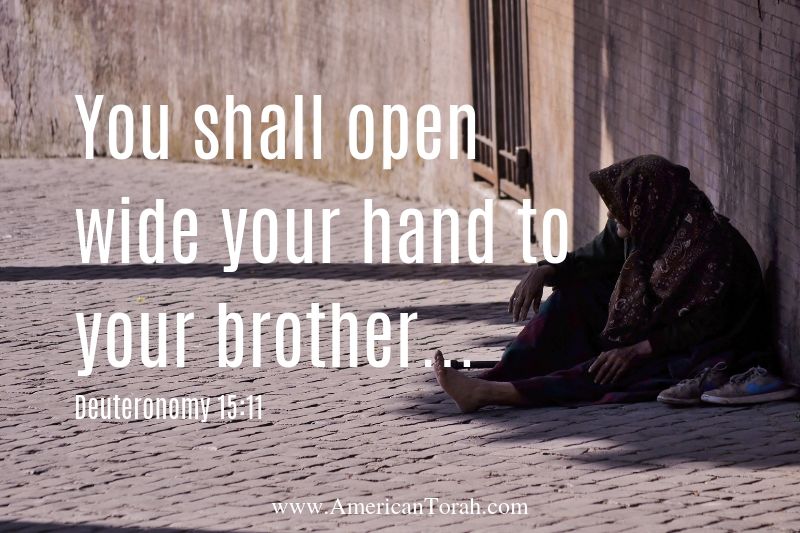 Bad things happen. It rains on the just and the unjust alike, and fellow believers will come on hard times. We’ve all known someone (and probably know someone still today!) who is so poor that he can’t afford the basic necessities of life. He’s homeless, wears worn out clothes, or can’t afford to buy food for his family.

These are hard questions, and probably can’t even be answered thoroughly without an intimate knowledge of the person’s specific circumstances, but the Bible does give us some basic guidelines on how to help someone in need. Leviticus 25 gives one of the clearest sets of instructions.

“If your brother becomes poor and cannot maintain himself with you, you shall support him as though he were a stranger [ger: a foreigner living in Israel, whether a naturalized Israelite or a temporary visitor, such as a migrant laborer] and a sojourner [toshav: an Israelite who is temporarily landless], and he shall live with you. Take no interest from him or profit, but fear your God, that your brother may live beside you. You shall not lend him your money at interest, nor give him your food for profit. I am the LORD your God, who brought you out of the land of Egypt to give you the land of Canaan, and to be your God.

“If your brother becomes poor beside you and sells himself to you, you shall not make him serve as a slave: he shall be with you as a hired worker and as a sojourner. He shall serve with you until the year of the jubilee. Then he shall go out from you, he and his children with him, and go back to his own clan and return to the possession of his fathers. For they are my servants, whom I brought out of the land of Egypt; they shall not be sold as slaves. You shall not rule over him ruthlessly but shall fear your God.”

This passage isn’t talking about someone who can’t afford a new television or a nice car. It’s good to be generous to all people, especially to those less fortunate than yourself, but that’s not the issue at hand here. These instructions concern someone who is truly destitute, in desperate need of food, clothing, and shelter for himself or his family.

The basic rules for dealing with a destitute brother can be summarized as below.

The Treatment of a Poor Israelite

The first rule is meaningless without further explanation, so I’ll go into that more below, and the fourth rule doesn’t apply in today’s United States. However, rules two and three apply, but are followed so rarely as to be almost unheard of.

The only people who give interest free loans to the poor are close family members, but God says that everyone who has the money to lend should be ready to do it. Not only should we lend freely, but we must be ready to forgive the loan in the shemitah year no matter how much he has repaid. How bizarre and revolting that feels to American sensibilities!

Yet this is how God wants his people to treat one another.

There are many places where you can buy new clothing at (or near) wholesale prices and used clothing at far below retail, but there aren’t many places where you can buy food at cost. Grocery stores will often reduce the price of goods that are near the end of the shelf lives, but they don’t reserve those products for the destitute. They are sold on a first-come, first-serve basis, just like the rest of their stock.

Some restaurants and grocery stores will donate old or excess products to charities, but that’s not exactly the same thing. Giving away food is fine–and even commanded–to an extent, but that shouldn’t be the only option available to the poor. Handouts and government welfare programs shouldn’t be the primary means of supporting the poor. Jobs and low-cost necessities promote better habits while maintaining self-respect.

So what about the ger?

The Treatment of a Ger

Remember that a ger is a foreigner who has joined himself to Israel, but has no land of his own, or else a foreigner who is temporarily living with Israel. Some of these commandments also include the toshav, who is a temporarily landless or itinerant Israelite, but there are no rules for a toshav that do not also apply to a ger.

How Charity Works in God’s Kingdom

There are times for outright charity, times to make things available to whomever is willing to do the labor, and times to hire and offer produce at a discount. Which option is appropriate in any given circumstances will depend on the individuals involved, and nobody can know that except those individuals. There is no one-size-fits-all solution that can be dictated from thousands of miles away. Charity should be local and almost always voluntary. (That doesn’t mean you shouldn’t give to people far away, only that you should start near at home.)

Note also that Biblical charity comes with some strings attached. Everyone in Israel is expected to keep God’s commandments, and those who refuse are to be cut off. In some cases that might mean exile or shunning, and in some it might mean death. I’m not saying that charity should be dependent on perfect behavior or that anyone should keep a score sheet to determine eligibility. What I mean is that no Israelite should ever be expected to support financially an enemy of God or Israel.

To be eligible for charity from Israel, one must be eligible to live among Israel, which primarily means keeping God’s appointed times and Sabbaths, and abstaining from sexual immorality, idolatry, and blood. Interestingly enough, the three prohibitions are the exact same requirements that James and the council of Jerusalem gave for new converts to come into fellowship in Acts 15.

God requires his people to give charity generously. Although he didn’t specify any penalty for not giving to the poor, he commanded it multiple times. The Prophets, Yeshua, and the Apostles all repeated those instructions.

Give to people you know personally. Give to charities that uphold God’s standards. Give to the poor, widows, orphans, and sick. Charity is not an option for God’s people, but charity shouldn’t be indiscriminate and irresponsible, either. Whenever possible, it should be local, personal, and relational.