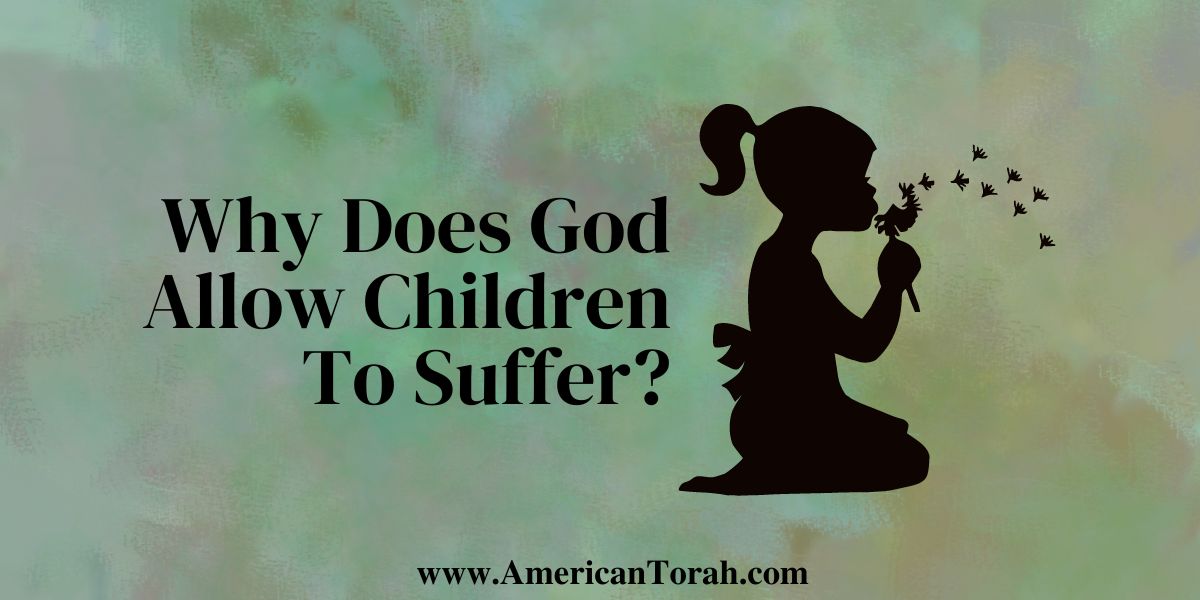 I woman recently wrote to me to ask for help in answering her son’s questions about why people suffer, especially little children. It’s a fair question, and I don’t think we’d be honoring God’s command to love our neighbors if we didn’t struggle with it.

Because it’s such an important question, I wanted to share my response with you.

I am an older woman, been through alot o fire. Still working the best I can. My youngest son asked the common question: “why does the one you call Yah allow such terrible things to happen to small children?” We know this is such a tough question. I began to explain, but he wanted some real fast answers and just would not even let me begin…

I completely understand your son’s frustration. This is a very difficult question. If God is so good and so powerful, why does he allow suffering? A complete answer would require an intimate knowledge of every innocent person’s life and suffering. But I can give you this short answer…

If the worst suffering anybody faced was a stubbed toe, then every stubbed toe would seem like the end of the world. A person might hop around and get angry at God, demanding to know, if he is so good and powerful, why does he allow our toes to be stubbed. He has no idea that God has already spared him the much greater torment of broken bones, cancer, and years of abuse by a parent. He has no concept of real suffering, so every little bump feels like the greatest pain possible.

How do we know that there isn’t some horrible suffering beyond all imagination that God spares us from? I assure you, that whatever you have endured in your life, someone else has endured much worse, and even they can’t imagine the extent of pain to which Satan would subject us if God allowed it.

Suffering is relative. What causes great pain to one person might be trivial to another. And it is all nothing and everything at the same time to God. He doesn’t like anyone having to suffer, but he has a greater plan that we don’t understand and can’t understand because of our limited, mortal perspectives.

People suffer because people make bad choices and God’s plan for mankind doesn’t allow him to interfere in our everyday lives. He wants us to choose to do what’s right and to suffer and witness the consequences when we don’t. Eventually, those who enjoy making others suffer will be judged and dealt with according to the states of their hearts, but it doesn’t serve God’s purposes–and ultimately our good–to short circuit the natural processes he set in motion from the beginning of Creation.

My personal belief is that our current existence is merely training for something greater after our resurrection at the end of this universe. God has not chosen to reveal what our mission will be in the world to come, but I strongly believe that our preparation for that future requires suffering in the present. Whether it is to strengthen us or only our faith or for some other purpose, I don’t know. But I am certain that it serves a greater purpose. As Paul wrote, all things work together for the good to those who trust in him.

And we know that for those who love God all things work together for good, for those who are called according to his purpose.
Romans 8:28