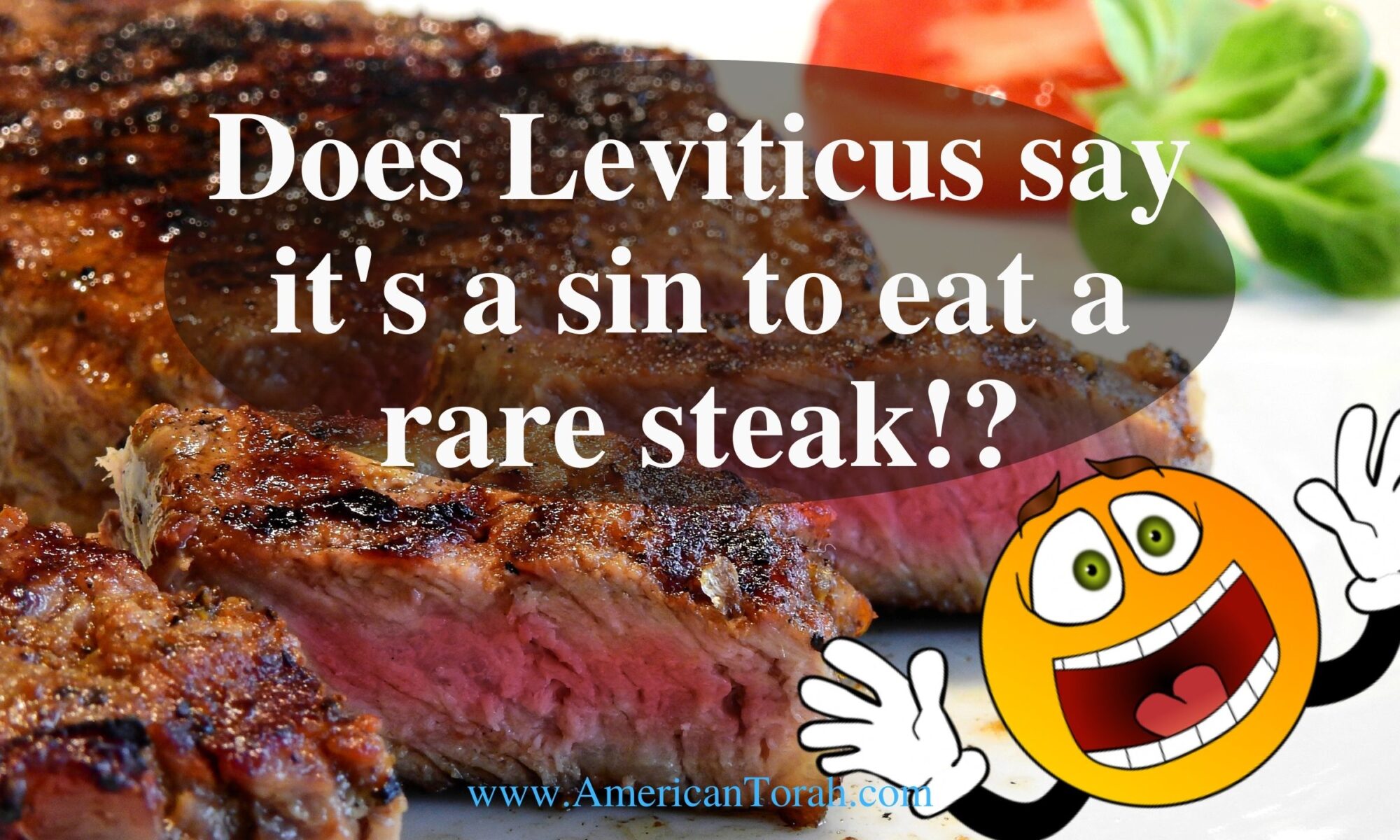 “It is impossible to remove all blood from your food. Microscopic traces will remain. Unless you eat your steaks well done, to remove all the blood… Sorry, still some left in there.” -Anti-Torah Guy

Anti-Torah Guy is right that it is impossible to remove all of the blood from an animal. I don’t care how thorough your butcher is or how many times you soak, salt, and wash that steak, there will still be trace amounts of blood.

On the other hand, he’s wrong about cooking it well done. Unless you’re prepared to incinerate it, no amount of cooking will remove all the blood. It will just be cooked blood.

So, what do we do with commands like this one?

God really, really does not like his people eating blood, and no matter what Anti-Torah Guy and his compatriots might say, the Apostles clearly reiterated that commandment for all believers in Yeshua, Jew and Gentile. They considered abstaining from blood to be the absolute bottom rung of acceptable behavior for gentile converts, right beside idolatry and sexual immorality.

[Read more on this passage in Acts 15 here.]

If it’s impossible to remove every drop of blood from meat and God hates it when people eat blood, does that mean it’s impossible to obey God in this matter? Definitely not! God wouldn’t command us to do something that we were completely unable to do. He told Israel that obedience was not too hard for them (Deuteronomy 30:11), so unless God was lying to them, it is not impossible to obey the command not to eat blood. All you have to do is ask him how.

Leviticus 17:13 “Any one also of the people of Israel, or of the strangers who sojourn among them, who takes in hunting any beast or bird that may be eaten shall pour out its blood and cover it with earth.”

Well….that’s just another iteration of the command not to eat blood. How does that tell us how to keep the commandment?

Draining the blood from an animal that was shot with an arrow or pierced with a spear–the primary ways that animals were hunted at the time Leviticus was written–will never remove every drop of blood from the tissue. A butcher will cut the animal’s throat and let the still-beating heart pump the blood out, but you can’t do that with an animal that has been hunted. Of course, it will still lose a significant amount of blood–must hunted animals die from blood-loss, after all–but the process will never be as thorough.

Yet, God still said we may eat an animal that was hunted as long as it is drained before the blood has a chance to coagulate.

The only possible conclusion is that God never expected anyone to get every drop of blood out of an animal’s tissues. He only expects us to remove the blood that can be drained by opening the major blood vessels!

As long as the animal was bled properly, most of the red fluid that oozes from a fresh cut of meat is myoglobin, not hemoglobin, which is what gives blood its red color. They are chemically similar, hence the similar color. A rare, bloody steak isn’t actually so bloody at all.

Bleeding the animal either at the time of death or immediately after is sufficient to remove the blood for the purposes of the commandment, and almost all animals butchered commercially in the United States meet that requirement. If there is still some blood in the animal after bleeding it–as there always will be–and other fluids that resemble blood, then that is God’s problem to deal with. Your job is to obey his instructions. It’s his job to deal with the consequences of that obedience. Anything more than that is a tradition of man, not a commandment of God, so don’t be afraid to take your steak off the grill before it’s shoe leather, because that’s another kind of sin in itself.

(The production of a healthy product fit for human consumption and the humane treatment of animals are important issues too, but beyond the scope of this article.)

5 Replies to “Does the Bible Say Not to Eat a Rare Steak?”