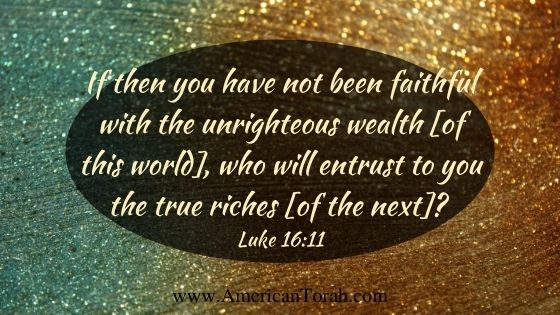 [Yeshua, aka Jesus] also said to the disciples, “There was a rich man who had a manager, and charges were brought to him that this man was wasting his possessions.

“And he called him and said to him, ‘What is this that I hear about you? Turn in the account of your management, for you can no longer be manager.’

“And the manager said to himself, ‘What shall I do, since my master is taking the management away from me? I am not strong enough to dig, and I am ashamed to beg. I have decided what to do, so that when I am removed from management, people may receive me into their houses.’

“The master commended the dishonest manager for his shrewdness. For the sons of this world are more shrewd in dealing with their own generation than the sons of light. And I tell you, make friends for yourselves by means of unrighteous wealth, so that when it fails they may receive you into the eternal dwellings.

“One who is faithful in a very little is also faithful in much, and one who is dishonest in a very little is also dishonest in much. If then you have not been faithful in the unrighteous wealth, who will entrust to you the true riches? And if you have not been faithful in that which is another’s, who will give you that which is your own? No servant can serve two masters, for either he will hate the one and love the other, or he will be devoted to the one and despise the other. You cannot serve God and money.”

The Pharisees, who were lovers of money, heard all these things, and they ridiculed him.

And he said to them, “You are those who justify yourselves before men, but God knows your hearts. For what is exalted among men is an abomination in the sight of God. The Law and the Prophets were until John; since then the good news of the kingdom of God is preached, and everyone forces his way into it. But it is easier for heaven and earth to pass away than for one dot of the Law to become void.”

This passage has always puzzled me. An incompetent manager found out he was about to be fired, so he conspired with his customers to steal from his employer in order to secure a new job–or at least some charity–with one or more of the customers. And Yeshua wants us to emulate this man? Does he want us to steal from our employers in order to create good will among those less wealthy? That doesn’t make any sense! Since the Pharisees’ immediate reaction was to ridicule him, they were probably thinking the same thing.

However, when reading it again recently, I noticed some details that must have escaped me before. The keys to understanding are in a phrase Yeshua used in his summary and in his response to the Pharisees, who overheard him speaking this parable to his disciples.

God’s Law (Torah) requires a public trial for anyone accused of a crime and that justice be rigorously pursued. In other words, there needs to be an investigation, and the accused has a right to defend himself. The rich man in this story held what amounted to a secret trial without the accused even being aware of it until he was told to pack up and get out. He wasn’t a good man to work for.

Maybe the manager was only negligent and hadn’t done anything criminal, or it could be that the case wasn’t strong enough to stand in a legitimate court of law, and so the rich man decided to dismiss the manager from his employ without pressing criminal charges. He certainly had a right to do so, whether the manager was guilty or not. As another of Yeshua’s parables points out, a man is within his rights to hire and fire anyone he chooses and to use his wealth however he sees fit.

It could also be that the rich man didn’t want to give the town elders and judge an opportunity to examine his books too closely.

In verses 9 and 11, Yeshua referred to the rich man’s wealth using the Greek word mammona, which isn’t just material wealth, but ill-gotten gain, and he even added the adjective adiko, meaning wicked or unrighteous.

If then you have not been faithful in adiko mammona [unrighteous, ill-gotten gain], who will entrust to you true riches?
Luke 16:11

The manager had not squandered the possessions of an ordinary businessman, but of a criminal mastermind, and when he colluded with the master’s clients to forge new instruments of debt, he cheated a cheater.

So are we then to seek out employment with criminals so that we can play Robin Hood, stealing from the rich to give to the poor? No, that’s not the lesson either.

When the Pharisees overheard all of this (as Yeshua intended, no doubt), they scoffed, probably thinking that Yeshua was telling his disciples to use dishonest means to further their mission. But he turned to them and explained that they were like the incompetent manager, but they were wasting the opportunity to prepare for the coming shift in spiritual power.

The Pharisees, Sadducees, and scribes of Yeshua’s day had inherited an unjust system in which the High Priest was appointed by Rome and the ordinary people were denied the right to study and understand the Scriptures for themselves. They had access to wealth and power that had been unjustly concentrated in the hands of a ruling class.

The Law and the Prophets have been read and studied right up until the time of John. And the good news of the Kingdom of God is proclaimed, and everyone is trying to claim a piece of it.
Luke 16:16 (Paraphrased)

The Torah and the Prophets had warned for over a thousand years that a day of reckoning was coming for unjust rulers when the Kingdom of God would be established on earth. Everyone wants to be part of the Kingdom, and religious leaders jockey for position to control the gates.

When John and Yeshua went to the common people and began proclaiming the arrival of the Kingdom, the ruling classes naturally objected. This was a golden opportunity for them to earn an honored place with the new King, but in their pride they clung to an obsolete office that seemed golden in the eyes of men but was spiritually rotten to the core.

Even the Wicked Know This…

The Temple was intended to unite the people in a closer relationship to God, yet the religious rulers used it to create division among the people and to separate them from God. Meanwhile, the Pharisees buried the people under onerous regulations, the “burden which neither we nor our fathers were able to bear” spoken of by Peter in Acts 15:10. They kept the gentiles as far away as possible, even forbidding a Jew to so much as enter their houses.

When they heard the good news, “Repent for the Kingdom of Heaven is at hand”, they should have repented from their pride and hatred, embracing their fellow Israelites and inviting the nations into the Tent of Jacob, but they jealously guarded their hoards of hay and stubble.

The point of Yeshua’s parable wasn’t that we should use fraud and bribes to earn good will with men, but that we need to be preparing for what’s coming rather than clinging to what’s passing away. Even the “sons of this world” know to prepare for the next life before this one is over. How much more should the “children of light” know to “lay up treasures in heaven, where neither moth nor rust destroys.”

When the Judge weighs your life on his scales, what will he find?

This life will end. Every title, every bank balance, and every seat in every boardroom will end with it. You have an opportunity right now to repent from selfish ambitions and instead begin laying up treasures in heaven by keeping God’s commandments and doing good for the people in your community. Don’t waste it.

One Reply to “Even the Wicked Understand This”