God gave Israel a system for handling difficult criminal cases. They were to take the case before the priests and the national judge and, once a ruling had been made, it was to be obeyed with no questions asked.

The man who acts presumptuously by not obeying the priest who stands to minister there before the LORD your God, or the judge, that man shall die. So you shall purge the evil from Israel. (Deuteronomy 17:12)

God didn’t say, “If the judge’s character is unimpeachable and the priest’s theology is impeccable.” We know from the Biblical histories that the priests and judges weren’t always as pure as the driven snow. Gideon, Samson, Eli… They were a very mixed bag of nuts.

John Chrysostom was the archbishop of Constantinople at the beginning of the 5th century, about one hundred years after the Emperor Constantine converted to Christianity. He is respected in many Christian circles as a great teacher and theologian. I haven’t read all of his writing, but I’ve read enough to know that he had some really good things to say.

He wrote some really rotten things too.

For example, he wrote extensively about what a “poor and miserable” people the Jews are, and not in the sense that they are broke and unhappy. He meant that they are evil, wicked people who deserve nothing but death and abuse at the hands of every good Christian.

No Jew adores God! Who says so? The Son of God says so. For he said: “If you were to know my Father, you would also know me. But you neither know me nor do you know my Father”. Could I produce a witness more trustworthy than the Son of God? -John Chrysostom, Against the Jews, “Homily 1”

In this work, he falsely stated that the synagogues were full of homosexuality and licentiousness, and were the houses of demons. He misquoted scriptures that contain indictments of a subset of Jewish leadership and even some that were directed at unbelieving and rebellious gentiles and he applied them to all Jews everywhere. He slandered all of the Apostles and the first Christians, since they were all Jews.

Chrysostom wasn’t the only venerated Christian teacher to spew such un-Christlike garbage. Martin Luther wrote this gem of libelous absurdity:

The sun never did shine on a more bloodthirsty and revengeful people as they, who imagine to be the people of God, and who desire to and think they must murder and crush the heathen. -Martin Luther, “The Jews and Their Lies”

I find it very difficult to believe that it is possible to love God and hate the Jews (as a people, not any specific sect or individuals) at the same time, and I will be very surprised to see either Chrysostom or Luther after the resurrection.

Fortunately for them, I don’t get to make those decisions.

I can’t see inside of anyone’s soul. To be perfectly honest, I don’t even think I have a very good view of my own. How could I hope to judge someone else? For all I know, John Chrysostom is one of God’s cherished favorites.

Speaking of a “man after God’s own heart”, what about King David? He was an adulterer, a murderer, and an idolater, yet clearly still a great man of God. George Washington and Thomas Jefferson were slave owners, and despite their frequent efforts to suppress or abolish the abominable institution, they didn’t hold their professions of human equality and God-given rights quite highly enough to do all that was necessary to secure the same rights for all Americans. Nonetheless, I believe them to have been great men.

How can we reconcile the evident greatness of the prominent men and women of history with their equally obvious moral flaws?

It seems to me that the first thing to do is to look in the mirror.

I don’t know about you, but I’ve got more than my share of flaws. I’m ashamed of some things I’ve done, and I suspect there are other things in my life that I ought to be ashamed of if only I knew about them. 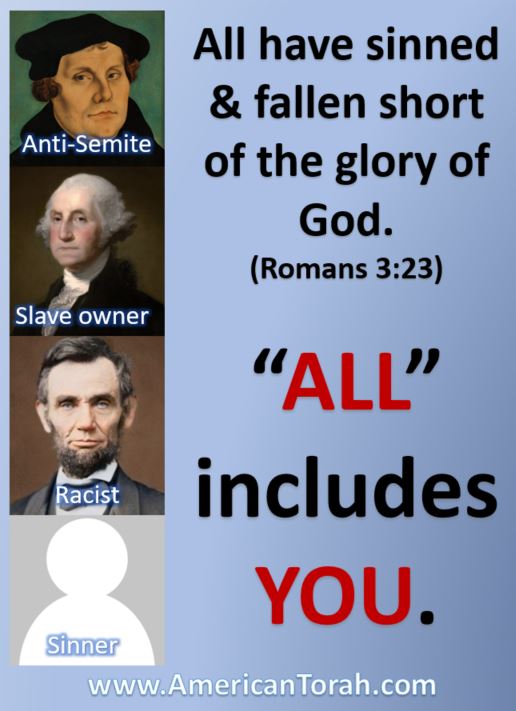 Many of the glaring sins of our forebears weren’t so glaring to them. Every house in David’s day had its household gods, and his was no different. His wife, Michal, used one to trick Saul’s men into thinking David was ill and asleep in bed. Washington and Jefferson thought they were doing everything reasonably within their power to end slavery, although from the twenty-first century it appears that they could have done so much more if they had truly believed their own rhetoric. Martin Luther was only echoing the predominant view of Jews among his countrymen. He had been steeped in lies about the Jews his entire life. These men were all products of their time and cultures, just as we are.

That doesn’t excuse anything they did. Chattel slavery, antisemitism, and idolatry were still sins against God–right is right and wrong is wrong no matter the cultural context–but those things were ubiquitous elements of the time. It’s hard for a fish to see the water in which it swims.

The bad news is that you and I are fish too. In two hundred years, our descendants will be saying the same kinds of things about us. Every day, we need to be looking in the mirror and asking God to reveal our slavery, our idolatry, our antisemitism to us. What is the great, glaring sin to which we have been blinded by air travel, fully stocked grocery stores, and the World Wide Web.

Is it something so obvious as abortion or homosexuality? No, good people with a solid biblical foundation can easily see the evil in those things. The great invisible sin of our age is something that most people don’t even notice and about which only a few people feel a little uneasy.

For all have sinned and fall short of the glory of God. (Romans 3:23)

I can’t tell you what our great sin is because I don’t know. But I can tell you that destroying the public symbols of our history, the writings, the names, and the images of great men and women who were also guilty of some great, invisible sin of their own, really accomplishes only one thing. It lets us pretend that we are better than they were.

And maybe that’s our sin.

One Reply to “The Great, Invisible Sin of Our Time”