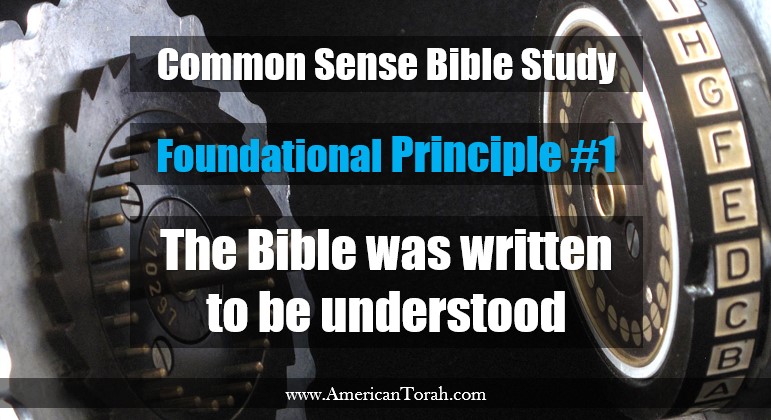 Three principles of Biblical interpretation are absolutely foundational to helping you understand the Bible. Without grasping these three rules, you will be blown around by doctrinal winds and fall prey to theological pied pipers.

Principle #1: The Bible was written to be understood.

Every sane person who publishes a book or writes a letter does so to communicate with other people. He writes in such a way that his intended audience will understand his message.

If he only wanted to work out personal frustrations or ensure he didn’t forget something, he could write it in a journal and use whatever obscure code he wanted. He could make up his own alphabet or use nicknames to hide his true meaning from snoops.

But there’s nothing like that in the Scriptures. Everything in the Bible was written to be understood by someone other than the author. Some passages are obscure due to linguistic or cultural differences and others were written using veiled language for political or prophetic reasons. Those factors certainly complicate the process of interpretation, but you will never need a secret decoder ring to work it out.

If you understand who the author was, the cultural, linguistic, and historical context in which he wrote, and who his intended audience was, then the meaning shouldn’t be too difficult to tease out.

The author won’t have invented his own words or new meanings for words that were already commonly used. He would write with words that were already familiar to his audience, and he would primarily use them in the context his audience would expect. He might use idioms or religious jargon, but only if he thought his audience would know what he meant. If he used a word in an unexpected way, you can expect him to explain it or give some kind of hint in the text.

Was the author a king, farmer, or priest? Did he live in times of peace or of foreign subjugation? Did he live in the shadow of the Temple or did he live in a distant land? Did his intended audience consist of relatively new converts or people who had grown up in the synagogue, attending every festival in Jerusalem? All of these circumstances and more will have profound impacts on the language and imagery he uses in his writing.

Yes, you can understand the Bible. You don’t need any secret algorithms, mystical diagrams, or urim and thummim. The only secret decoder ring you need is sufficient background information.