The late R. C. Sproul once said that you should read the Bible like you would read any other book. There is plenty in that statement to argue with if you’re looking for argument—The Bible isn’t like any other book!—but if you step back and try to understand what Sproul meant by it, you’ll find a fundamental truth to Bible study instead. 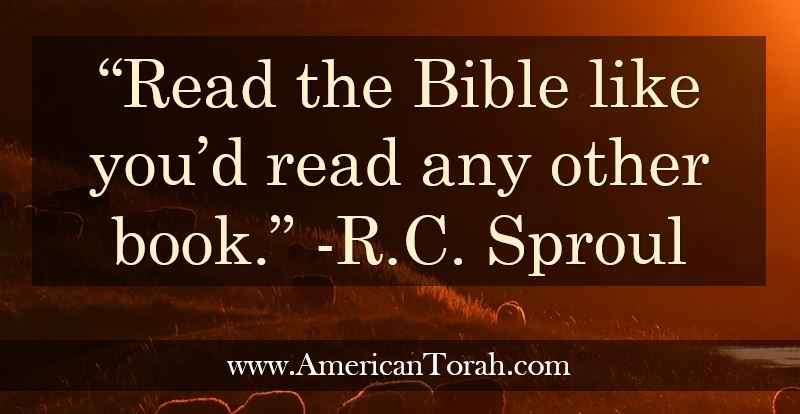 If you pick a random book off a shelf at the library, how do you approach reading it? You ask several questions before you start:

Most people don’t even think about these questions consciously. They ask and answer them all in a few seconds subconsciously as part of the process of deciding whether or not to read the book. But consciously or not, we all ask these questions, because we need to know what kind of book we’re holding before we can know how to read it. You wouldn’t read a chemistry text book the same way you’d read a mystery novel or a book of poetry. If you try to read William Blake’s “The Tiger” as if it were a how-to guide for constructing jungle carnivores, not only will you fail to get a tiger, but you will fail to get the point.

The Bible—or rather the individual components of the Bible—is no different from other books in this respect. You have to know what kind of book you’re holding before you can know how you ought to read it.

Although the Bible’s authors were inspired and guided by God, they still wrote in their own peculiar styles and from their own perspectives. The culture, religion, politics, and attitudes of an author will influence how he expresses himself and can add a significant depth to his words that might not be obvious otherwise.

For example, this verse from Ecclesiastes sounds like it’s about farming or some other hard manual labor:

I hated all my toil in which I toil under the sun, seeing that I must leave it to the man who will come after me.
Ecclesiastes 2:18

It’s a great and satisfying thing to build something that will last for generations, but this verse is talking about more than houses and even temples. It takes on whole new dimensions of meaning when you realize that it was actually written by a fabulously wealthy scientist-philosopher-king. There are many kinds of hard labor and the struggles of a righteous ruler for the sake of his people are as real as the bloody knuckles of a stone mason, even if they are not as visible to the naked eye.

The Bible was written by at least 40 different authors across more than 1500 years. They were scholars, priests, lawyers, kings, warriors, shepherds, and fishermen. Their professions, backgrounds, and current events gave each of them a different perspective on the world. We don’t know the names of every Biblical author, but, where there is doubt, there are usually sufficient clues to tell us what kind of people they were. At the very least, we can know that they were Hebrews in an agrarian society with no electricity, no running water, and no transportation that wasn’t powered by muscle or wind.

The one thing we must never do is read the Scriptures as if they were written by Americans in modern English.

For Whom Was It Written?

This statement will have very different—though related—meanings, depending on whether it was addressed to marriage counselors, property surveyors, or salesmen.

Paul’s letters were primarily written to specific groups of former gentiles who had no cultural background in the Scriptures and had only begun earnestly studying after their relatively recent conversion. James’ letter and Peter’s first letter, on the other hand, were written to Greek-speaking Jews scattered throughout the Roman Empire. They were familiar with the teachings of the Pharisees and had heard the Old Testament scriptures read and taught in their local synagogues every Sabbath since they were children.

Unlike Paul and Luke in the New Testament, who wrote mostly to former gentiles, almost all of the Old Testament authors wrote for the benefit of Israelites with a thorough knowledge of their own culture, Scriptures, and prophecies. The people to whom Jeremiah preached and wrote knew the Torah well. They saw the Temple and the daily offerings with their own eyes. They had a deep cultural inheritance of the promises of God to Israel, of Messianic theology and expectations. A letter written to the people of Jerusalem in 700 BC is likely to be very different in content and expression to one written to recent converts living in Rome in 60 AD.

Keeping the background of a text’s intended audience in mind, especially when reading Paul, can aid understanding by eliminating some possible interpretations as being very unlikely and make other interpretations almost self-evident.

What Is It About?

Everything we read has a topic. Each discrete sentence or passage is about something or it wouldn’t exist, and the Bible is no different. If we want to know what a Bible passage means, we need to know what topic the author was discussing and to be careful about applying the words more broadly than the author intended or to the wrong topic altogether.

For example, if a paragraph says that gold is the worst of all elements and should never be used by anyone for any reason, you might be very confused if you didn’t know that the topic under discussion is the construction of tools that must not transmit electrical charges. It doesn’t mean that gold is unsuitable for any purpose whatsoever, only that you shouldn’t make solid gold screwdrivers for electricians.

Some topics have a narrower focus than others. For example, Daniel’s prophecy about the four beasts is about the rise and fall of kingdoms and not at all about winged leopards and horned monsters. We might be able to draw from it some valid lessons for studying history and politics, but we would be adding meaning to the text that Daniel didn’t intend. Once you start interpreting a passage beyond its original topic, you are on treacherous ground where the text can be twisted into any shape imaginable.

What Kind of Literature Is It?

Different genres of literature can have very different rules of grammar, structure, and interpretation. When reading in English, we all understand that a poet has more artistic license to exaggerate and distort the literal truth for the sake of the art than does a clinical researcher when describing the methodology and findings of his latest study.

Nobody accuses William Blake of lying for describing the tiger as being forged by a master smith. We all know that he was just using picturesque language and didn’t really believe that tiger brains come out of furnaces.

The Bible contains a variety of literary genres, frequently within the same book, and we need to apply the same kinds of mental filters when reading the Bible as we would when reading other books. Here are some of the broad categories of biblical genres:

There is frequent overlap between these genres. For example, Genesis contains all five in various places and the Song of Moses in Exodus 15 is History, Poetry, and Prophecy simultaneously.

You can almost always tell what genre you are reading by the context, but it can be obscured by translation. For example, the original texts might be arranged in meaningful ways, such as word order, white space, etc., or might contain rhymes and puns that are lost in translation. Most literally translated English Bibles attempt to preserve these elements, but it can be very difficult—often impossible—to translate poetry and allegory without losing much of the original art.

When Was It Written?

Some books and passages contain explicit statements concerning their time of writing: “In the seventh year of the reign of So-and-so, son of So-and-so…” A good Bible timeline can help you place these writings in the correct historical context.

Most English Bibles are arranged in roughly chronological order, so if a book doesn’t say when it was written, you can get a good idea by where it falls in the Table of Contents. There are exceptions, of course. The book of Job might have been written earlier than Genesis, for example, and all of the books of history, including the Acts of the Apostles, span long periods of time in which other books were begun and completed.

The time when a passage was written can sometimes have a dramatic impact on the meaning. For example, a prophecy of a future event is meaningless without knowing what “future” meant to the author. The Old Testament prophets contain many prophecies about the kingdoms of Judah, Israel, and the surrounding nations. If a passage talks about the future reunification of the two kingdoms, was it written before or the Assyrian conquest of Israel? Before or after Ezra and Nehemiah returned from Babylon? The answer to that question could change our understanding of the author’s intent.

The Bible Doesn’t Exist in a Vacuum

A thorough treatment of each of these topics could fill multiple volumes and probably has, but I did say at the start that this isn’t a masters course in Biblical hermeneutics. If you have the time and resources to invest in that kind of study, more power to you. For most of us, a little thoughtful common sense will have to suffice.

Just remember that the Bible didn’t spring into existence from nothing. It was written by real people, for real people, in the midst of real events. You can read the Bible like it’s just another coffee table book full of platitudes free of context, and you’ll still get some value out of it, but if you want real understanding, if you want to know what meaning the original authors intended to convey, then you need to have at least a passing understanding of who wrote each particular book or passage, to whom they wrote it, when, and why.

You can get most of that information from the text itself. Where the text is unclear, a good Bible Encyclopedia can be helpful, but remember that even the experts disagree about many dates, authors, etc., of some books. Believe what the text says and take what the experts say with a large grain of salt.