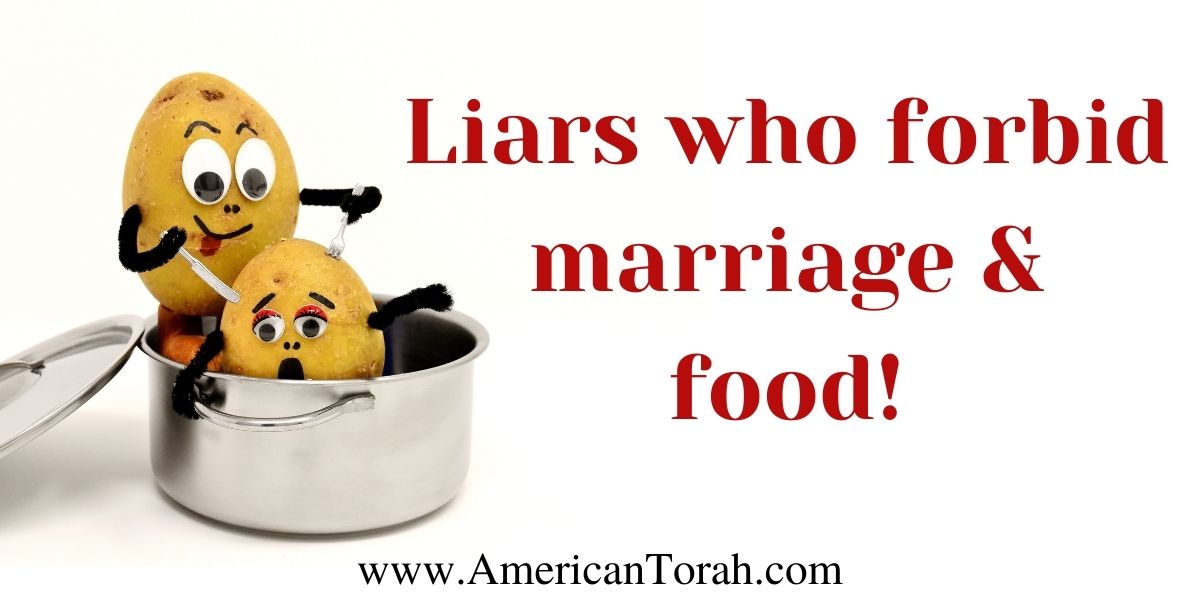 (1) Now the Spirit speaketh expressly, that in the latter times some shall depart from the faith, giving heed to seducing spirits, and doctrines of devils; (2) Speaking lies in hypocrisy; having their conscience seared with a hot iron; (3) Forbidding to marry, and commanding to abstain from meats, which God hath created to be received with thanksgiving of them which believe and know the truth. (4) For every creature of God is good, and nothing to be refused, if it be received with thanksgiving: (5) For it is sanctified by the word of God and prayer.
1 Timothy 4:1-5 KJV

I believe that there are two primary ways in which people tend to misread this passage which lead them to interpret it to mean that all of God’s rules about clean and unclean animals have been revoked.

I usually quote from the English Standard Version, but I chose the King James Version in this article to illustrate the first problem: the intrepid drift of English vocabulary over time. The KJV translates two Greek words in a way that seems to be clear on first reading, but actually obfuscates Paul’s original meaning. Specifically, broma (βρῶμα), translated as “meat” and ktisma (κτίσμα), translated as “creature”.

“Commanding to abstain from meats” must refer to Jewish laws about not eating pork, right? And “every creature of God is good” must mean that pigs are good to eat, right?

The Greek word Broma does not refer only to the flesh of animals, what we call meat, but to food in general. This isn’t a mistranslation in the KJV, because “meat” also once meant any kind of food in English. Throughout the New Testament broma is translated as “meat” in the KJV, but is used to refer to food in general, not to the flesh of animals. Bread, broccoli, and beef are all equally “meat” in King James English. Most modern translations read “food” in those verses instead of “meat”.

Likewise, the second Greek word, Ktisma, does not refer only to living things, as we understand the word “creature” in twenty-first century English, but to all things created. When the KJV was first published, the English word creature was applied to anything that could be created. The sun, stars, and sand dollars are all God’s creatures, not because they are alive, but because God created them.

Now consider how the ESV translates this same passage:

(1) Now the Spirit expressly says that in later times some will depart from the faith by devoting themselves to deceitful spirits and teachings of demons, (2) through the insincerity of liars whose consciences are seared, (3) who forbid marriage and require abstinence from foods that God created to be received with thanksgiving by those who believe and know the truth. (4) For everything created by God is good, and nothing is to be rejected if it is received with thanksgiving, (5) for it is made holy by the word of God and prayer.
1 Timothy 4:1-5 ESV

For modern English speakers, the ESV is much clearer. “Abstinence from foods that God created to be received with thanksgiving” is unambiguous, even if the subsequent clause of “by those who believe and know the truth” could allow for some speculative theology. “Everything created by God” is also quite clear. It refers to everything that God created, which includes….everything.

And YHWH God commanded the man, saying, “You may surely eat of every tree of the garden, but of the tree of the knowledge of good and evil you shall not eat, for in the day that you eat of it you shall surely die.”
Genesis 2:16-17

The Tree of Knowledge of Good and Evil was only one of many edible creatures that God did not create to be eaten, and Paul doesn’t state anywhere in this passage in First Timothy (nor in any other passage) that God has set aside his instructions on what animals he wants his people to eat and not to eat. Interpreting it so is a clear example of eisegesis, reading a theological opinion back into the text instead of letting the text speak for itself (aka exegesis).

The problem Paul was addressing had nothing to do with Biblical dietary laws. As in almost all of his letters, Paul denounced man-made traditions masquerading as divine command, not God’s own commandments. False teachers were telling people that they needed to abstain from marriage and food. Perpetual celibacy and frequent fasting were common themes among among false teachers of the time. Celibacy before marriage is good, but celibacy within marriage is bad. Fasting is good, but it is only commanded on one day of the year, and even that’s debatable. Petty arguments about whether we should fast from all food on Mondays or Wednesdays or from meat on Fridays were rampant in the first century. (See my article on the Didache.)

In this passage, Paul told Timothy not to let these liars add or remove from God’s actual instructions. God decides what is food or not. God instituted marriage, and no man can change God’s laws on these or any other matters. Even if he had wanted to change God’s Law, Paul simply did not have the authority. No man does. As Moses wrote in Deuteronomy 4:2, “You shall not add to the word that I command you, nor take from it, that you may keep the commandments of YHWH your God that I command you.”

A close reading of Paul’s letters, being careful not to add anything to the text that he didn’t actually write, shows that he did not teach against Torah or Yeshua. (Considering Yeshua’s words, it seems to me that to teach against one is to teach against the other.) People often misconstrue his polemics against over-zealous converts, both Jewish and gentile, as being against obedience, but one can only interpret his letters in such an antinomian manner through eisegesis and begging the question.