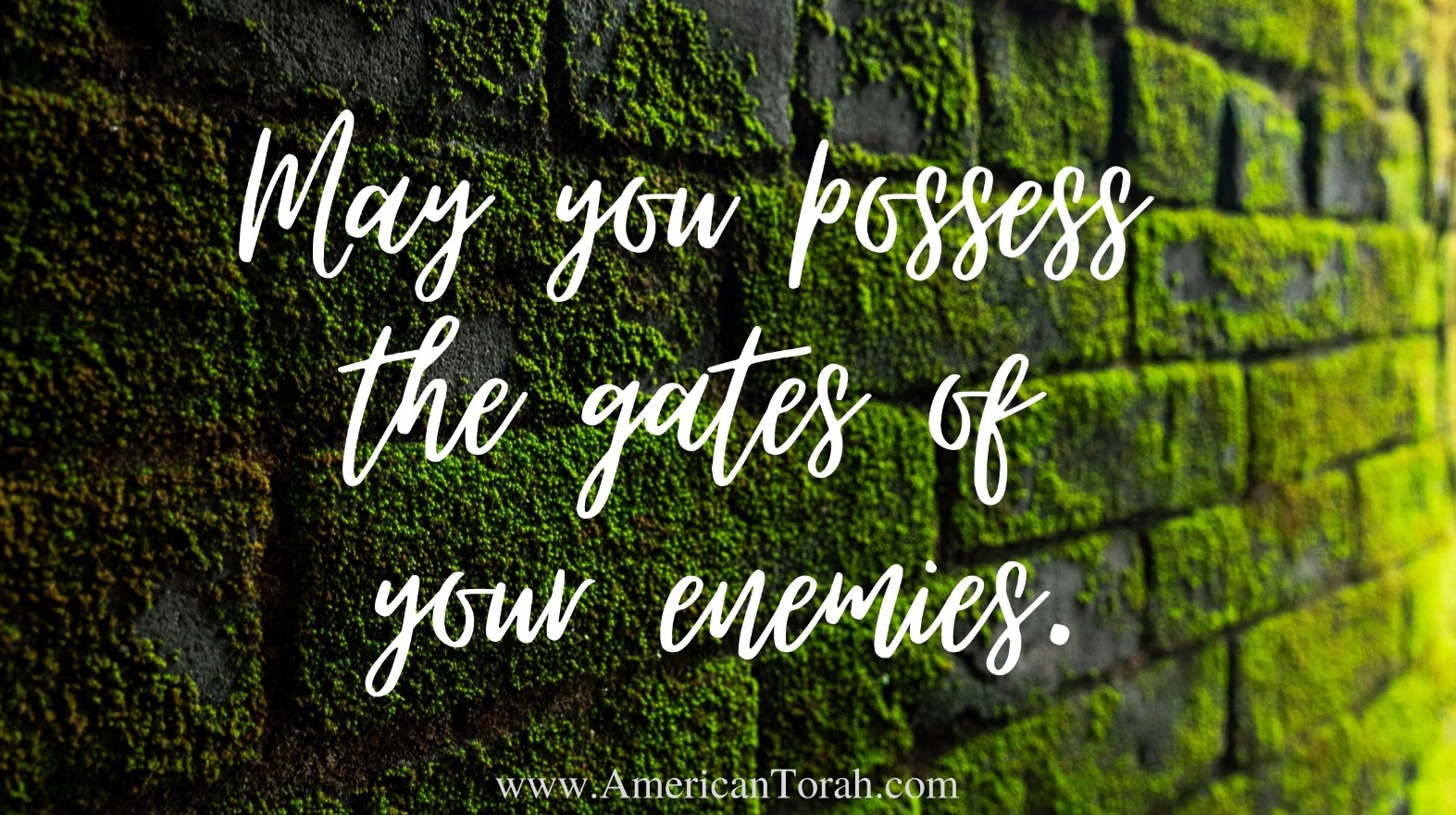 In Genesis 24:60, Bethuel and Laban send Rebekah away with this blessing:

And they blessed Rebekah and said to her, “Our sister, may you become thousands of ten thousands, and may your offspring possess the gate of those who hate them!”
Genesis 24:60

We all know from Hollywood that the city gates are the key to capturing an enemy city. If you can break through the gates, you’ve all but one the battle.

We know from the rest of the story that Bethuel and Laban were much more concerned with what they could get out of other people than what they could give, so it’s the kind of blessing we might expect from them. “May you take everything from anyone who tries to take from you!”

However, the Angel of YHVH blessed Abraham’s offspring in the same manner:

And the angel of the LORD called to Abraham a second time from heaven and said, “By myself I have sworn, declares the LORD, because you have done this and have not withheld your son, your only son, I will surely bless you, and I will surely multiply your offspring as the stars of heaven and as the sand that is on the seashore. And your offspring shall possess the gate of his enemies, and in your offspring shall all the nations of the earth be blessed, because you have obeyed my voice.”
Genesis 22:15-18

Did God mean to bless Abraham’s son with military victory over all his enemies? To an extent, yes, but the Bible uses the idea of gates in a much broader sense than this.

Gates are, by definition, the primary point of entry to any city or home, but they are also the focus of trade, public discourse, and justice. The elders of a town meet at the gates to hear complaints and try criminal cases. God wants his Law written on the gates of our cities and homes, not just to remind us whenever we pass through them, but to signal that all true justice aligns with his standards, not ours.

If you sit in the gates of a city, it means that you are a respected elder and judge. People bring their disagreements and accusations for you to hear, and they expect you to tell them what to do. You are the arbiter of public morality.

For the people of God to possess the gates of their enemies doesn’t necessarily mean to defeat them in battle. It can also mean to have a defining influence over justice, trade, diplomacy, and the mechanisms of government.

We aren’t called to overthrow earthly governments or conquer nations in order to convert them forcibly to Christianity. We are, however, called to exemplify and teach God’s ways to our communities. Wherever we live, we have an obligation to promote God’s standards of justice: Equal weights and measures. Judicial impartiality. Due process, including the right to defend oneself and refute all evidence and witnesses. The sanctity of marriage. The defense of the helpless. Generosity to the poor and landless.

For a variety of reasons, we in the United States are utter failures in that calling, and I hear people offering two mutually exclusive solutions: Rise up in arms and take the country back by force or else retreat to mountain camps to wait for God to rescue us.

But I don’t believe that either of these are real solutions.

I tell you that you are Petros, and on this Petra I will build my ekklesia, and the gates of hell will not overpower them.
Matthew 16:19

Most of us live within the gates of Hell even now. Our courts, centers of trade, and seats of government are occupied and controlled by wicked people who have made themselves to be God’s enemies and therefore ours as well.

Yeshua told Peter that the gates of hell would not prevail against his assembled people (ekklesia). Clearly he didn’t mean that we are literally to storm the gates of Hell, and divinely ordained armed insurrection is very rare in the Bible, despite the many wicked tyrants described on its pages.

Likewise, Christian isolationism, in which we hide from the world in our homes and simply pray for better times, isn’t an option for God’s people. We have been commanded to preach the Gospel of the Kingdom of Heaven and to be a light to all peoples, teaching the way of salvation and obedience to God’s instructions.

The Great Commission doesn’t end with witnessing to strangers on the street or coworkers in the office. It extends to city hall, the governor’s mansion, and Capitol Hill in Washington. It extends to Wall Street and Silicon Valley as well, because all of these are the city gates, and almost all of them are now in the possession of our enemies.

If you love God, you will promote his worship and his kingdom, and if you love your neighbor, you will promote justice at the city gates. As the people of God and subjects of the Kingdom of Heaven, we have an obligation to cultivate influence in the city gates here on earth through righteous means, not just for our own benefit, but for the benefit of all the people who live within the domain of those gates.