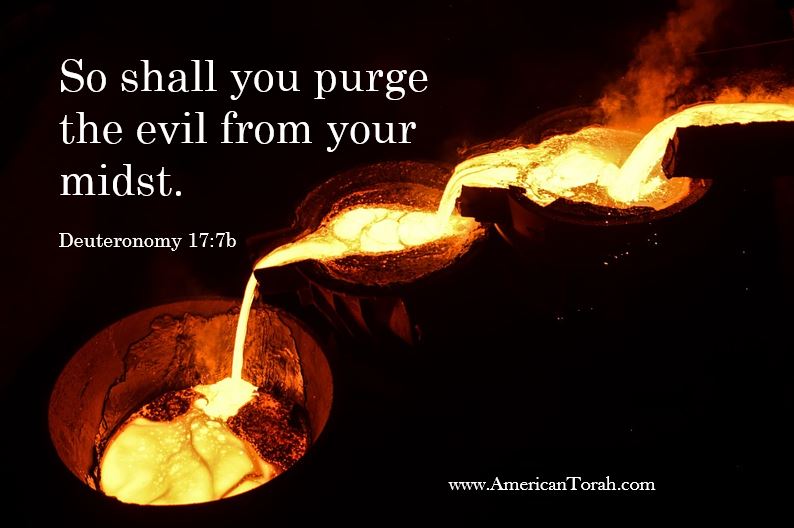 You cannot get a complete picture of God’s prescribed justice system by reading any single passage of the Torah. Rules for how to handle a particular sort of crime are in one place. Rules for handling a kind of investigation are in another. Guidelines for reporting and investigating allegations of idolatry are in yet another place.

I think this is by design. God doesn’t want a person to read only this or that part and dismiss the rest as not applicable to him. Although not every regulation is specifically addressed to every person, no person can effectively carry out what does apply to him without understanding what applies to everyone else. Remember that God told Ezekiel to measure and describe the Temple and to teach it to the people in order to make them ashamed. There are universal truths in every statement within Torah, and every person can learn something important even from those rules that are clearly not intended for him to follow in any literal sense.

I say “apparently” because they are connected by more than the overall theme of justice. For example, the sequence illustrates the roles and responsibilities of various members of the nation as their relative authority increases. The picture begins with individuals, moves to the community, then to the nation, and finally to the king.

One person may or may not be committing idolatry and some other person discovers it. If a person suspects his neighbor of idolatry, but he has no real evidence, he can’t snoop. He has to mind his own business. Nobody is allowed to go looking for people who might be worshiping idols without some basis.

However, if some evidence comes to light or if an accusation is made, then the community must get involved. There is no option. There must be a thorough investigation and a trial conducted by the authorities of the town or the city where the crime is alleged to have taken place. The accused is presumed innocent unless sufficient evidence is found and at least two truthful, qualified witnesses testify against him.

If the accused is found guilty by his neighbors, those same people are to take him to the town gates where he will be stoned to death. The witnesses must be the first to throw their stones.

So you shall purge the evil from your [community] midst. Deuteronomy 17:7b

The accused–and the entire community–is entitled to a public trial before a jury of his peers and in which he must be allowed to face his accusers and defend himself… That sounds awfully familiar.

If the case is too difficult for the local judges to decide, they are to take it to a high court in Jerusalem consisting of a panel of priests and whoever is judge over the nation at the time. (This would be someone like Joshua, Gideon, or Samson.) Whatever that court tells them to do, they must do. There are no appeals, no second opinions, and anyone who refuses to carry out the instructions of the high court must himself be put to death.

So you shall purge the evil from [the nation of] Israel. Deuteronomy 17:12b

This entire process requires that every member of the community is living in subjection to the community. There’s nothing wrong with an amount of “rugged individualism”, but a truly biblical lifestyle can only exist within the context of a community with a recognized authority structure. It doesn’t have to be very rigid or formal, but it has to exist and has to be able to respond when evil is found among the people.

And some evils are too large for a single community to handle.

Although Israel had no king at the time this law was given, it recognized that they might at some point and set out some rules for how a king is to behave: He is not to abuse his position to gain wealth, power, or prestige for himself. He is not to rely on military power, political alliances, or economic strength for security, but on God. He is not to oppress the people.

Finally, the king must become a lifelong Torah scholar beginning on the day he ascends to the throne. He is required to make a copy of the Torah for himself and to read it and meditate it on it every day of his life.

That his heart may not be lifted up above his brothers, and that he may not turn aside from the commandment, either to the right hand or to the left, so that he may continue long in his kingdom, he and his children, in Israel. Deuteronomy 17:20

In the first two sections, the focus of the text is on purging evil from Israel, but when we look at the king, the lens is reversed. It no longer focuses on removing what is wrong, but on building what is right.

Certainly the king would have a role in punishing wrongdoers and purging evil from the people, but his primary role isn’t as a law enforcement officer or even as a military commander. Before all else, the king must be a teacher of God’s ways, an exemplar of humble & consistent righteousness.

We can see these same principles all through the New Testament as well.

We are told not to be gossipers and fault-seekers, but rather to extend grace to one another. We are to yield to one another whenever possible, to act in good order for the benefit of the community as a whole. When there is some wrong, we aren’t to take matters into our own hands, but to first find out if there has been any actual wrong done, and if so to give opportunity for repentance.

A note here: The rules in Deuteronomy 17 require a complete system. No individual, church, or synagogue may carry out these instructions. They are given in the context of a community and a nation that honors God’s Law. Only the community is authorized to investigate, try, and condemn the accused. Only a national court of priests and the judge is authorized to try the most difficult cases. We cannot execute idolaters or anyone else strictly according to God’s commands in modern America because that execution itself would be in violation of God’s commands.

If someone in our congregations is found to be an idolater, an adulterer, or guilty of any other serious sin, we should be certain of the facts first, and if the guilty refuses to repent, then we are to expel that person from our midst, but until our whole people accept God’s Law, that must be the end of it. Once they are outside of our congregation, they are no longer our responsibility, but God’s. (1 Corinthians 5:13)

We don’t have communities, judges, and national leaders who respect God’s Law. We don’t even have many churches or synagogues who do.

What we do have–and what we must have more of–are community leaders who follow the example of the king in Deuteronomy 17, who take God’s Law seriously, who study it and meditate on it daily. As long as our teachers, elders, preachers, pastors, and rabbis continue to reject the clear instruction of God, we can’t expect our community members to do any better.

As Paul wrote, don’t accuse people casually and don’t appoint them to leadership casually either. Our leaders must be men above reproach, men of honor in the eyes of both men and God, men who are not respecters of position or abusers of power. We need men who love God and love their own people as brothers, not subjects.

The saying is trustworthy: If anyone aspires to the office of overseer, he desires a noble task. Therefore an overseer must be above reproach, the husband of one wife, sober-minded, self-controlled, respectable, hospitable, able to teach, not a drunkard, not violent but gentle, not quarrelsome, not a lover of money. He must manage his own household well, with all dignity keeping his children submissive, for if someone does not know how to manage his own household, how will he care for God’s church? He must not be a recent convert, or he may become puffed up with conceit and fall into the condemnation of the devil. Moreover, he must be well thought of by outsiders, so that he may not fall into disgrace, into a snare of the devil.
1 Timothy 3:1-7