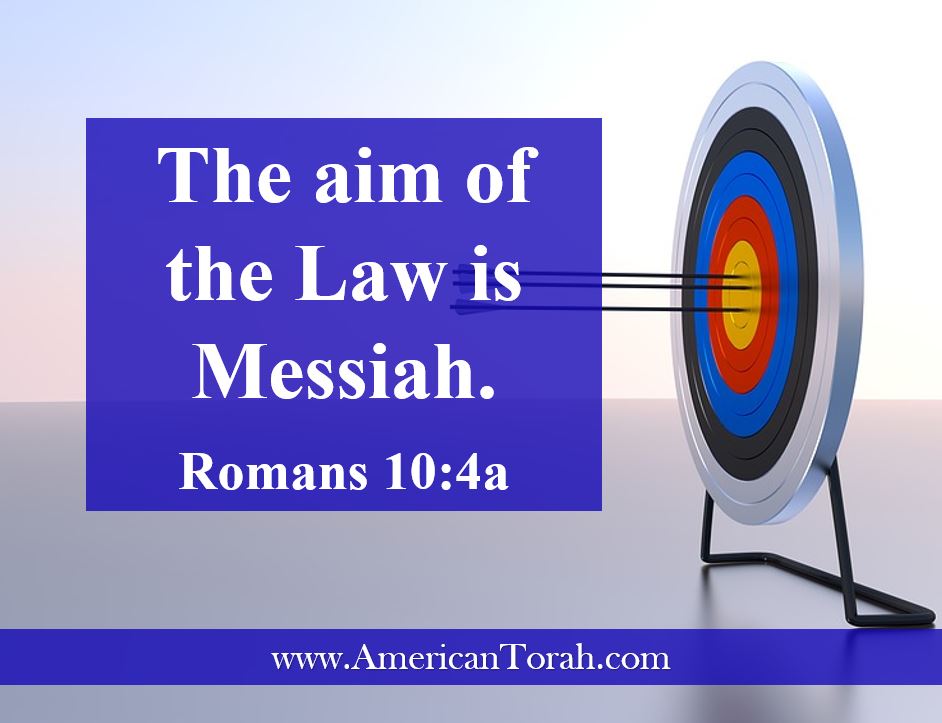 For Christ is the end of the law for righteousness to everyone who believes.
Romans 10:4

I can’t tell you how many times someone has quoted this verse to me as “proof” that Jesus (also known as Yeshua) annulled God’s Law. At first glance, it looks like a killer argument. QED. How much clearer could it be?

Remember that not a single word of the Bible was written in English and, by the very nature of human languages, no translation can ever be perfect. The key word in this verse seems to be “end”, so lets take a look at the original Greek.

The first word, telos, is the word translated into English as “end”.

1) end
1a) termination, the limit at which a thing ceases to be (always of the end of some act or state, but not of the end of a period of time)
1b) the end
1b1) the last in any succession or series
1b2) eternal
1c) that by which a thing is finished, its close, issue
1d) the end to which all things relate, the aim, purpose
2) toll, custom (i.e. indirect tax on goods)

Termination of the Law would seem to be a reasonable translation, but Thayer gives us a number of other options too, including “aim” and “purpose”. “The aim of the Law” also seems pretty reasonable to me. Coincidentally, the English word “end” can be interpreted either way as well.

But is telos used in the sense of “aim” and “purpose” anywhere else in Scripture? Several places, in fact, by Paul, James, and Peter.

Behold, we consider those blessed who remained steadfast. You have heard of the steadfastness of Job, and you have seen the purpose of the Lord, how the Lord is compassionate and merciful.
(James 5:11)

Though you have not seen him, you love him. Though you do not now see him, you believe in him and rejoice with joy that is inexpressible and filled with glory, obtaining the outcome of your faith, the salvation of your souls.
(1 Peter 1:8-9)

The aim of our charge is love that issues from a pure heart and a good conscience and a sincere faith.
(1 Timothy 1:5)

In the above three quotes, I bolded the English words used to translate the Greek word telos. Can the Lord ever be terminated (James 5:11)? Is our faith terminated by our salvation (1 Peter 1:8-9)? Should we stop avoiding pointless controversies once we have attained love (1 Timothy 1:5)? Of course, not! In these cases, translating telos as “termination” would be absurd.

So there is ample precedent for translating telos as aim or purpose instead of end, but how can we know for certain which one Paul meant in Romans 10:4?

Do not think that I have come to abolish (καταλυσαι: tear down, destroy, dissolve, overthrow) the Law or the Prophets; I have not come to abolish them but to fulfill (πληρωσαι: make full, complete, carry out, perfect) them.
(Matthew 5:17)

Does it really make sense for Yeshua to say “I have not come to tear down the Law, but to put an end to it”? No. If we interpret Romans 10:4 to mean that Yeshua ended the Law, then we make his own words in Matthew 5:17 into nonsense. However, if we interpret Romans to say “The aim of the Law is Christ…”, it agrees with Matthew perfectly: Yeshua did not come to terminate the Law, but to perfect it.

“The end of the Law” means exactly the opposite of what many people today claim that it means.

And if my word isn’t good enough, here’s what a few venerable Christian commentaries have said concerning Romans 10:4:

So, let’s have an end of this foolish controversy so that we may allow the Law to fulfill its manifold purposes: to teach men about sin and their need for a Savior, to illustrate the identity and purpose of that Savior, and to show us how to love God and one another. All of these together are the telos of the Torah.

I recorded a video to go with this article. You can watch it on YouTube or PewTube.