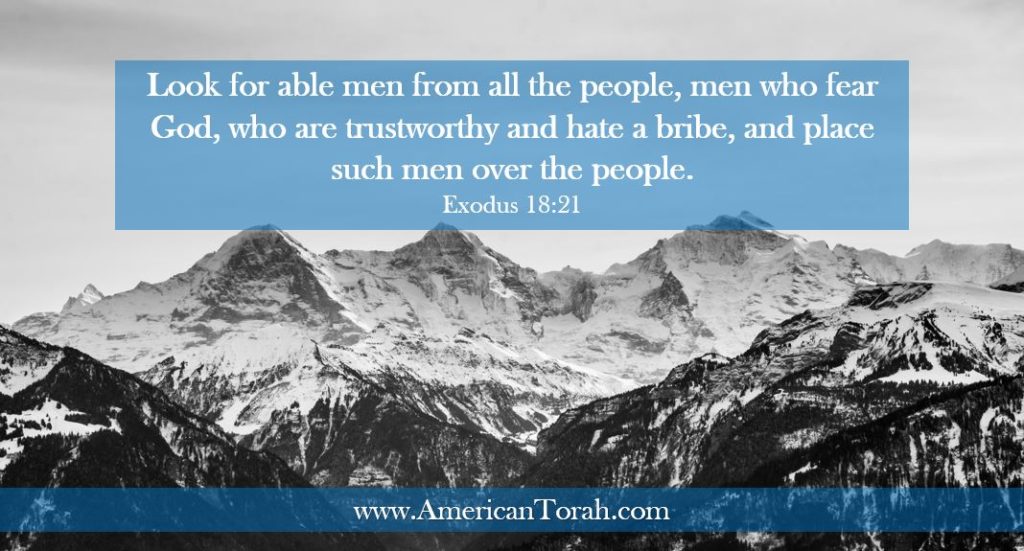 Moreover, look for able men from all the people, men who fear God, who are trustworthy and hate a bribe, and place such men over the people as chiefs of thousands, of hundreds, of fifties, and of tens.
(Exodus 18:21)

In this passage, Jethro (Hebrew: Yitro) had observed Moses working himself to death by attempting to address every complaint of the millions of Hebrew refugees by himself. He wisely suggested that Moses needed some help and gave some specific instructions on how to select his helpers. His instructions were essentially the same as those Paul gave to Timothy and Titus many centuries later:

Therefore an overseer must be

…able men… These men were to be “able” or chayil. They must have proven their ability by success in business, community, family, and war. They should be men of both knowledge and ability. They don’t need to be supermen, but their families should be well ordered, their businesses more successful than not, and their personal finances in order. Untried men should not be placed in positions of authority.

…men who fear God… Ability alone is not enough to make a great leader of God’s people. He must also be a man of God. He should have high personal standards, a healthy prayer life, and not embroiled in sordid controversies. There are many fine atheists and agnostics in the world–at least by the world’s standards–but they are not qualified to lead God’s people.

…who are trustworthy… Not men who are apt to deceive their way into office. The pathological dishonesty of the vast majority of modern politicians is obvious to anyone with eyes to see and ears to hear. They lie and they lie and they lie, bolder every year, yet they remain in office. That we continue to elect such men and women into leadership is proof of the old adage: We get that government which we deserve.

…hate a bribe… Offices with power are rife with all sorts of opportunities to advance one’s own interests. It is a good thing to desire to lead God’s people, but not to desire it overly much. Remember Yeshua’s words: The first will be last, and he who would lead must serve. Any system resembling a democracy, unfortunately, must favor dishonest seekers of power and fortune.

There are no perfect people in the world. Everyone has flaws. Everyone has weak moments when we make poor choices, set a poor example, and think terrible thoughts. But it’s one thing to be flawed and something else entirely to be a liar, a thief, or a murderer.