When God rejected Cain’s offering and accepted Abel’s, Cain’s first reaction was anger. God told him he had no right to be angry; it was his own fault that the offering wasn’t suitable. There was no contest between the two brothers. If Cain would choose to do what was right, God would accept him also. If he surrendered to temptation, then sin was waiting to take control, subjecting him to the Law of Sin and Death. The choice to be mastered by sin or to be the master of it was Cain’s alone. He had no one to blame but himself.

And YHWH said to Cain, Why have you angrily glowed? And why did your face fall?  If you do well, shall you not be accepted? And if you do not do well, sin crouches at the door; and its desire is for you, and you shall rule over it. -Genesis 4:6-7

The rest of the story is a pattern that everyone should be familiar with. We see it all around us every day. Cain hid that anger in his heart and it continued to warp his perspective, making his brother Abel into the bad guy even though he had done nothing at all against Cain. Cain valued his pride above his brother and even above God, so his heart followed his pride into deep resentment.

“Where your treasure is, there your heart will be also.” -Yeshua, Matthew 6:21

Eventually, whatever is in your heart will come out of your mouth.

Having filled his heart with anger, Cain spoke harsh words to his brother. The word for “talked” in verse 8 is אמר (amar) which, unlike other Hebrew words that carry the same basic meaning, seems to indicate a confrontation rather than a simple conversation. It is the same word used for God’s rebuke of Cain in verse 6.

“What comes out of the mouth proceeds from the heart, and this defiles a person.” -Yeshua, Matthew 15:18

Eventually, what has found its way from your heart to your mouth will find its way to your hands. 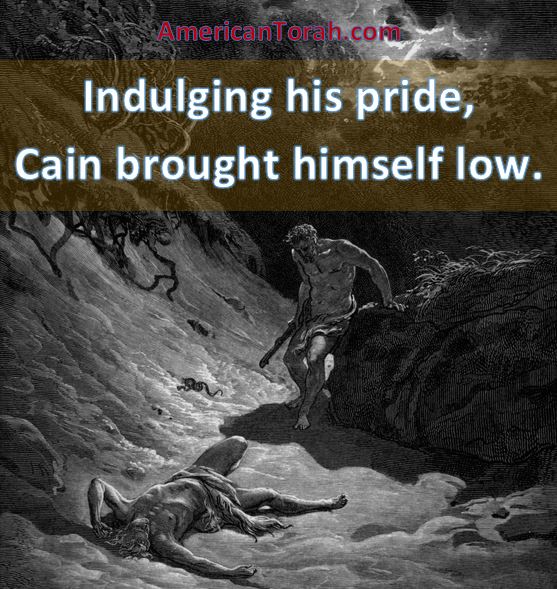 Cain saw himself as greater than he was and so took offense when God didn’t agree. Rather than correct his error and be elevated by good deeds, he cultivated his resentment until it drove him to rise up against his brother. The consequence was that he was driven away from his family and made unable even to continue his chosen profession as a farmer. Through pursuing self-aggrandizement, Cain achieved nothing but self-degradation, subjugated by the very forces that drove his ambition. If only he had sought to elevate his brothers instead of himself, God would have exalted him too.