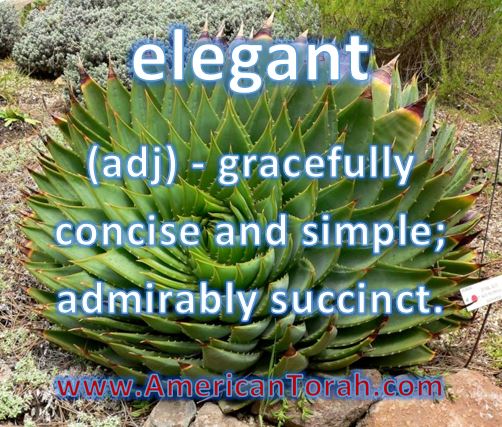 One characteristic of what computer programmers refer to as “elegant” code is that it accomplishes much with little. In other words, a complicated process reduced to a few simple lines of instruction. One can usually tell a novice programmer by the convoluted nature of his code.

Torah is like an elegantly written piece of software. While it seems at times to be just a long list of dos and don’ts, in reality, it is a simplified portrayal of deep and nuanced concepts. A set of instructions on what to do in a particular circumstance often (always?) opens into a multi-dimensional framework of truths concerning the nature of God, man, redemption, and spiritual health and sickness, but only if you look at it from the right angle. Here are just some of the characteristics that a passage contains greater mysteries than appear on the surface:

At Ashrei, Rabbi B discusses some of the deeper meanings of “clean” and “unclean” in Leviticus 11-15 (aka the Torah portions of Sh’mini, Tazria, and Metsora), and how these concepts contain real and applicable spiritual import for people in ages and cultures.

It is in the most unlikeliest of places that we often discover the most precious of treasures. From time to time I hear from people who read the Bible how they skip certain sections when reading because those sections seem tedious and boring, or even irrelevant. When expressing this sentiment they often cite the lengthy genealogies or the detailed laws concerning sacrifices or laws pertaining to cleanliness.

Although I understand and sympathize with the sentiment somewhat, I often respond by reminding them that “All Scripture is given by inspiration of G-d, and is profitable for doctrine, for reproof, for correction, for instruction in righteousness, that the man of G-d may be complete, thoroughly equipped for every good work” (cf. II Timothy 3:16). And all means all, including the passages we are about to consider in this and subsequent posts.

I believe that G-d’s Word is inspired, literally “G-d-breathed,” all of it. Not just some of it, or just the part starting with the Gospels, but all of it, very single word, every single syllable. I also believe that in the beginning was the Word, that the Word was with G-d, that the Word was G-d, and that the Word became flesh and dwelt among us (cf. John 1). That being said, I believe that we can find the Messiah being proclaimed on every page of the Bible. Let’s begin by taking a look at one of those long, tedious, and detailed sections of the Torah and see what we might discover.

Read the rest here: The Leper Messiah. (The linked blog is no longer online. Sorry! http://mayimchayim10.blogspot.com/2016/05/it-is-in-most-unlikeliest-of-places.html)