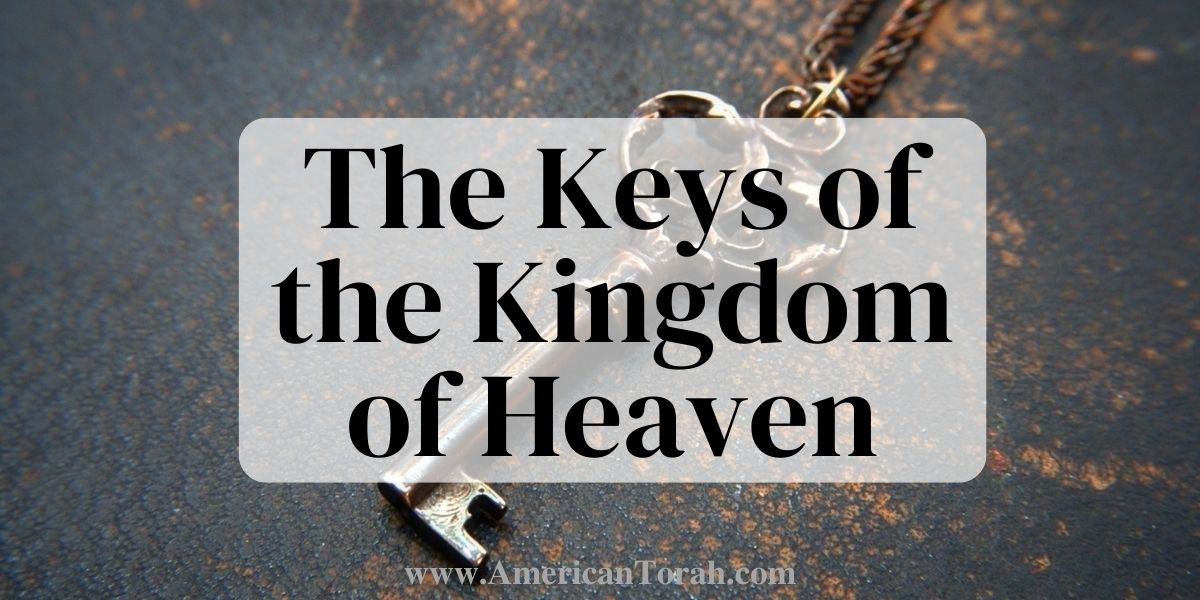 Matthew 16:13-20 is chock full of fuel for theological controversy!

Now when Jesus came into the district of Caesarea Philippi, he asked his disciples, “Who do people say that the Son of Man is?” And they said, “Some say John the Baptist, others say Elijah, and others Jeremiah or one of the prophets.” He said to them, “But who do you say that I am?” Simon Peter replied, “You are the Christ, the Son of the living God.” And Jesus answered him, “Blessed are you, Simon Bar-Jonah! For flesh and blood has not revealed this to you, but my Father who is in heaven. And I tell you, you are Peter, and on this rock I will build my church, and the gates of hell shall not prevail against it. I will give you the keys of the kingdom of heaven, and whatever you bind on earth shall be bound in heaven, and whatever you loose on earth shall be loosed in heaven.” Then he strictly charged the disciples to tell no one that he was the Christ.
Matthew 16:13-20 ESV

This is one of the primary passages that the Roman Catholic Church will claim as support for their authority. Yeshua (Jesus) made Peter the first Pope and gave him the authority to modify God’s Law as needed, and today’s Pope has inherited that authority in an unbroken line of succession from Peter. Since the Pope has authority to dictate (bind and loose) the rules to Heaven, then when the Pope says the Sabbath is now on Sunday, God has to shift his schedule to suit Rome.

Except that’s not what the Bible says. Not at all. But then again, it’s easy to see how one might conclude that from this text.

Yeshua used several puzzling phrases in this conversation. I’ll address each of them in turn.

Who do people say the Son of Man is?

“Son of Man” essentially means “human”. Throughout the book of Ezekiel, angels refer to the prophet as “son of man”, evidently not as a special title, but something more like “descendant of Adam”. However, in some contexts it had a much greater meaning. In the apocryphal books of Enoch, an angel also refers to that prophet as “son of man”, but with the added connotation of “Messiah”.

The author of Enoch probably took his cue from Daniel who described a divine being “like a son of man” who came from Heaven, suffered, and then returned to Heaven with great glory. Daniel’s Son of Man is clearly a reference to the Messiah who would defeat Israel’s oppressors and usher in the Kingdom of Heaven. Yeshua clearly had this context in mind as he frequently referred to himself as the Son of Man.

Whichever he meant by the first question, Yeshua then turns it around to himself and the disciples. “Whom do you say I am?”

Peter immediately replies “You are the Messiah, the Son of the living God,” by which he also identifies Yeshua as Daniel’s Son of Man. (Also Enoch’s Son of Man, contrary to the text of Enoch, which identifies Enoch himself. Yeshua responds by saying that Peter could only know this because God had especially revealed it to him, and this sets the stage for the next controversial phrase.

You are Peter, and on this rock I will build my church.

Yeshua wasn’t building a new Gentile religion, but restoring the remnant of faithful Israel. Whenever the Apostles wrote of “the church”, they meant an assembly of the people of God. Ekklesia is the Greek equivalent of the Hebrew words kahal and edah, which are translated as “congregation” or “assembly” in the phrase “the congregation of Israel” throughout the Old Testament.

Peter’s name in Greek is Petros, which is derived from the Greek word for rock, but has been altered to a masculine form suitable for a man’s name. “Rock” on the other hand is the standard feminine Greek word, petra.

The question is, what does Yeshua mean by “this rock”? He frequently changed subjects in the middle of a sentence, using one idea as a segue or illustration of another. Did he do that here, saying “You might be named Rocky, but on this other rock…”? If so, what is the other rock? I think there are three possible interpretations:

All three interpretation seem plausible to me and in accordance with the rest of Scripture. I think the first and third explanations are most likely, and I lean toward the first–I haven’t always–that Peter himself is the rock on which the assembly of Israel would be rebuilt.

The Gates of Hell shall not prevail against it

Does “it” refer to the ekklesia (the assembly) or to the petra (the rock)? I believe it refers to the rock, to Peter himself.

Hell in this verse is the Greek word Hades, which refers to the grave–Sheol in Hebrew–the place where the spirits of the dead are held while they await their ultimate resurrection. “Hell” is a poor translation in modern English, because most people equate Hell with the Lake of Fire described in Revelation, but this is not the same as Hades. (See A Dictionary of Death, Resurrection, and Judgment for more information.)

In neither case are gates used in an offensive nature. The implication is that Peter will, in some way, assault the gates of Hades. Stay with me a little while longer and I’ll explain what that means. It is closely tied to the next thing that Yeshua told him.

I will give you the keys of the kingdom of heaven

Yeshua did not give Peter the authority to deny anyone access to eternity, to “excommunicate” them. That isn’t what the “keys of the kingdom” are for. Rather, Yeshua told Peter that, because he was the first to recognize him as the Messiah and Son of God, he would also be the first to open the gates of the Kingdom of Heaven to others.

In Matthew 16, Peter was the first to announce to the disciples that Yeshua was the Messianic Son of God.

In Acts 2, Peter announced to the Jews gathered in Jerusalem for Shavuot (Pentecost) that Yeshua of Nazareth had come and inaugurated the Kingdom of Heaven.

In Acts 4, Peter announced to the Sanhedrin and the priests that they had crucified Yeshua of Nazareth, but that same Yeshua had risen from the dead.

In Acts 10, Peter announced to the Roman Centurion Cornelius that God welcomed him and his family into the Assembly and the Kingdom of Heaven.

At least four times, Peter was the first to open the gates of the Kingdom of Heaven to a group of people, and this is what Yeshua meant when he said that he would give Peter the keys of the Kingdom. Not to lock anyone out, but to open the gates to all who would give their full allegiance to the King, no matter who their parents were or what language and religion they had been born into.

But in possessing the keys to the Kingdom of Heaven, Peter opened two gates, not just one.

He also broke down the Gates of Hades so that those who were dead in sin, without hope of every reconciling to the God of the Jews, would be born again. The spiritually dead came to life through Peter’s testimony.

Whatever you bind on earth shall be bound in heaven

Rabbinic literature uses this concept of binding and loosing to refer to rulings on questions concerning the application of God’s Law. Here again we come to the concept of the “gate” where the elders of a city used to sit and hold court. The Law was written in ink, but the application often requires weighing competing obligations. Should a newborn boy be circumcised on the eighth day as God commanded even if the eighth day would fall on the Sabbath when God said nobody should be working? (See John 7:21-24.)

If an authority rules one way or another about whether some thing should be done, he has figuratively bound or loosed the actions of another.

There is also another question of translation. I consulted numerous commentaries in preparation for this article and the attached video, and they were unanimous in saying that a more literal translation of this phrase is “Whatever you bind on earth shall have been bound in heaven.”

Yeshua didn’t tell Peter that he could bind or loose anything in Heaven. No man is authorized to change God’s Law.

Not even Yeshua could take even a single mark away from Torah. (See Matthew 5:17-20.) If he had, then he would have violated the Law and disqualified himself as Messiah. His death would be pointless, his resurrection powerless.

Yeshua wasn’t giving Peter the power of salvation and condemnation, but stating that the Spirit of God working in Peter was reforming Peter’s own heart to be in alignment with God’s, so that Peter would have the power to discern right from wrong even in those cloudy circumstances that confound the wisest men. Peter didn’t become perfect, but he did gain the Law written on his heart so that he could bind on earth what had already been bound in heaven and loose on earth what had already been loosed in heaven.

In fact, in Matthew 18:18, Yeshua told all twelve of the disciples that they would share Peter’s discernments on matters of right and wrong. I don’t think that even the Roman Catholic Church would recognize twelve Popes simultaneously.

This was a blessing and pronouncement of wisdom, not of power. After Peter opened the gates of the Kingdom of Heaven to the nations and reminded the Jerusalem Council of what had happened with Cornelius, he stepped aside and allowed James, the brother of Yeshua, to make the final ruling on minimum standards of behavior for newly converted gentiles.

Tell no one that he was the Christ

If the disciples’ ultimate mission was to tell the world of Yeshua’s identity and mission, then why did he tell them not to tell anyone?

This was a temporary injunction. It might have been because everything had to happen in the right time. The Father planned Yeshua’s incarnation, death, and resurrection so that it would all happen at the most opportune moment for spreading the Gospel of the Kingdom to the whole world. If the people came to believe that Yeshua was truly the Messiah too soon, how would that have affected the required timetable?

But there is another reason that is more closely related to the conversation that had just concluded: Yeshua singled Peter out as the one who would open the gates of Heaven to the masses. The other disciples had to wait for Peter to fulfill this calling before they could also start throwing open lesser gates.

Peter was a great man, but only a man. He was not the first Pope. In fact, there has never been a Pope in the way that the Roman church views that office. There have been pretenders and possibly even well-meaning men who sincerely believed that they were specially appointed to rule God’s people for him and dictate morality to God himself. Sincerely, terribly wrong men who have led many millions into an adulterated mess of pagan superstition mixed with truth.

The Roman church includes many, many good people who are most definitely a part of the Kingdom of Heaven and who will pass on to eternal life, but they will do so in spite of the Pope and Catholicism, not because of them.

One Reply to “Did Jesus Appoint Peter As the First Pope?”