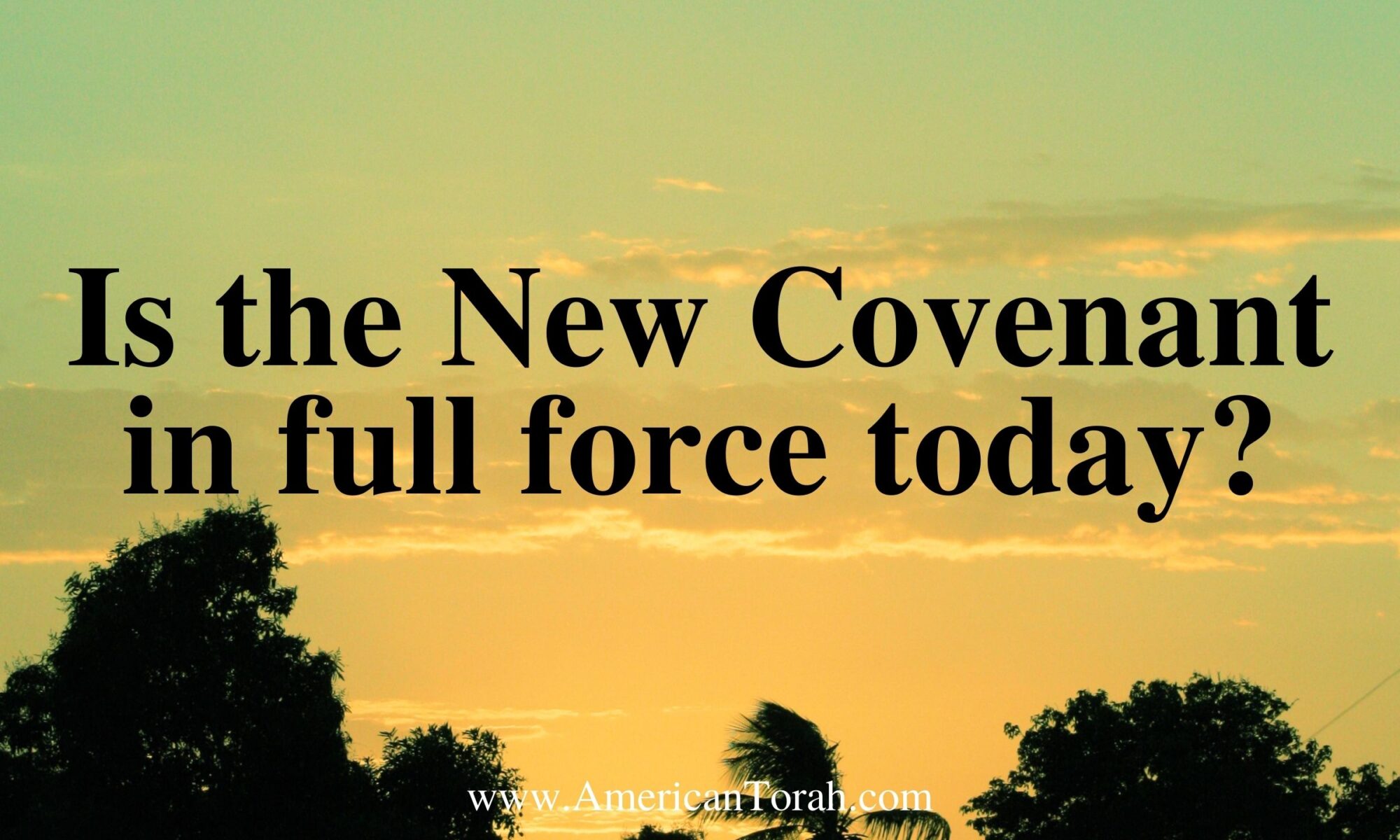 In that same ancient Internet forum that I have mentioned several times before, a Torah-keeping believer wrote, “Until the Law is written on our hearts, it is still needed. And, since Christians are NOT keeping the Law, it is obvious that it hasn’t been written there. Therefore, the New Covenant has not yet come, even though it has been promised and assured.”

Another forum-member, whom we will call Joe, ever the Christian example, responded,

The new covenant has come, you blithering idiot!

He brought the new covenant. He tore the veil in the temple. He saved us from sin and death. He rescued us.

Joe’s objection is a very common one and also very easy to answer. It’s not even entirely wrong. Jesus (aka Yeshua) did save us from sin. He rescued us from the condemnation that we justly deserved due to our lawlessness. But the New Covenant is more than that. The ubiquity of this confusion testifies to the widespread ignorance of Christians concerning scripture and their almost complete reliance on the doctrines of men rather than the actual words of God and the prophets.

What Is the New Covenant?

Here is the passage that most specifically promises the New Covenant:

Behold, the days are coming, declares YHWH, when I will make a new covenant with the house of Israel and the house of Judah, not like the covenant that I made with their fathers on the day when I took them by the hand to bring them out of the land of Egypt, my covenant that they broke, though I was their husband, declares YHWH. For this is the covenant that I will make with the house of Israel after those days, declares YHWH: I will put my law within them, and I will write it on their hearts. And I will be their God, and they shall be my people. And no longer shall each one teach his neighbor and each his brother, saying, ‘Know YHWH,’ for they shall all know me, from the least of them to the greatest, declares YHWH. For I will forgive their iniquity, and I will remember their sin no more. Thus says YHWH, who gives the sun for light by day and the fixed order of the moon and the stars for light by night, who stirs up the sea so that its waves roar— YHWH of hosts is his name: If this fixed order departs from before me, declares YHWH, then shall the offspring of Israel cease from being a nation before me forever. Thus says YHWH: If the heavens above can be measured, and the foundations of the earth below can be explored, then I will cast off all the offspring of Israel for all that they have done, declares YHWH. Behold, the days are coming, declares YHWH, when the city shall be rebuilt for YHWH from the Tower of Hananel to the Corner Gate. And the measuring line shall go out farther, straight to the hill Gareb, and shall then turn to Goah. The whole valley of the dead bodies and the ashes, and all the fields as far as the brook Kidron, to the corner of the Horse Gate toward the east, shall be sacred to YHWH. It shall not be plucked up or overthrown anymore forever.
Jeremiah 31:31-40

These are the defining characteristics of the New Covenant:

These characteristics imply other things. Since all Jews will know God and since they were intended to be a nation of priests and a light to the rest of the world, those who would know God will go to the Jews as evidenced by Jeremiah 16:19 and Zechariah 8:23.

What Does the New Covenant Have to Do with Gentiles?

O YHWH, my strength and my stronghold, my refuge in the day of trouble, to you shall the nations come from the ends of the earth and say: Our fathers have inherited nothing but lies, worthless things in which there is no profit.
Jeremiah 16:19

Thus says YHWH of hosts: In those days ten men from the nations of every tongue shall take hold of the robe of a Jew, saying, ‘Let us go with you, for we have heard that God is with you.’
Zechariah 8:23

From the examples of Torah, from these prophecies, and from Paul’s writings, we can also extrapolate that the promises of the New Covenant and citizenship in Israel would be extended to gentiles. That doesn’t change the nature of the covenant, only its breadth. This is the great inheritance we have gained through the Messiah. We are now joint heirs with Israel in the New Covenant. We have forgiveness of sins just like the Jews do.

Guaranteed, but Not Yet Delivered

But has God’s Law been written on our hearts? Do we no longer have to teach each other about God? Is Jerusalem free from danger? Obviously to all but the most delusional, Jerusalem is under constant threat of war. We do not have God’s Law written on our hearts. We still have to teach each other about God. Paul wrote that this great inheritance of a perfect knowledge of God isn’t yet ours. I believe that process begins at the moment we decide to be faithful to Yeshua, but it is clearly not remotely complete.

In him you also, when you heard the word of truth, the gospel of your salvation, and believed in him, were sealed with the promised Holy Spirit, who is the guarantee of our inheritance until we acquire possession of it, to the praise of his glory.
Ephesians 1:13-14

He who has prepared us for this very thing is God, who has given us the Spirit as a guarantee.
2 Corinthians 5:5

There are several steps in selling a house that are exactly analogous to the New Covenant. We have a signed contract, which is God’s promise of salvation. We have an earnest of the eventual fulfillment of the contract in the form of the Holy Spirit. But the terms of the contract haven’t been completed yet. Yeshua has paid the ultimate price for our salvation and restoration to the Father, but until we shed our mortal “tents”, we still walk by faith in the promise of our salvation and in imperfect knowledge of the Father. When we have the New Covenant in full, we will no longer have to walk by faith alone because we will see him face to face.

The Letter to the Hebrews (8:13), written many decades after Yeshua ascended to Heaven, speaks of the New Covenant as a developing thing, slowly outshining the Old Covenant, like the rising sun that makes the stars fade away. But at the time of the writing of that letter, the Old was still “becoming obsolete” and was only “ready to vanish away”. That which has been guaranteed and secured with an earnest payment has not yet been delivered. That which is still waxing, is not yet fully risen.

The New Covenant was certain and began to be established from the moment it was first prophesied in the Garden of Eden. It was sealed by blood at Yeshua’s crucifixion and a great token of its inevitability was given to us at Pentecost, but it is not yet fully in force as God promised it would be. Like so many things prophesied in Scripture, the New Covenant is “already, but not yet”.

One Reply to “Is the New Covenant in Force?”