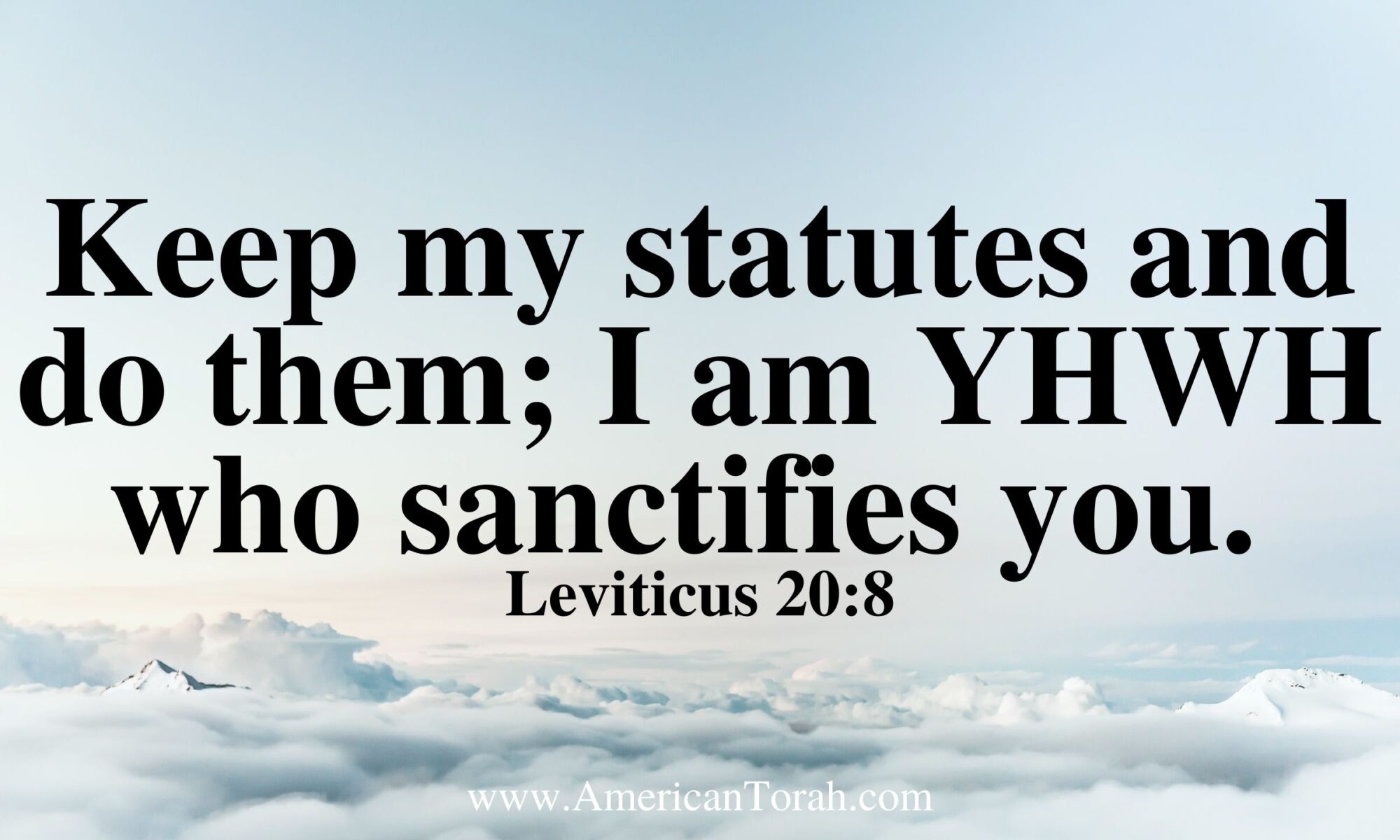 People frequently point to Acts 15 and the Council of Jerusalem as an argument against Christians keeping Torah. “Peter, James, and the other Apostles said that gentile converts only need to keep these four rules, so we don’t need to keep the Law of Moses.” The obvious counter is that, if eating food that has been sacrificed to idols, sexual immorality, eating animals that have been strangled, and consuming blood (Acts 15:20) is the full moral standard for Christians, then we are free to dishonor our parents, thumb our nose at traffic signs, lie, cheat, steal, and curse God. Yet nobody believes that!

Clearly the ruling of the Jerusalem Council is just a baseline for new converts in the context of the pagan Roman Empire, who already had a basic understanding of right and wrong.

Here’s another statement extracted from a conversation from a long time ago, in an Internet forum far, far away:

Jesus’ entire ministry on earth was centered around clarifying the law, and in many places he criticizes those who live by the letter of the law instead of the spirit of the law. an example is the “good samaritan parable”. The laws were given to the Jews in order to keep them ceremoniously clean and set aside for God. So when Jesus says that he did not come to abolish the law, but to fulfill it, his blood sacrifice has fulfilled the spirit of the law by making us clean before God and setting us aside for him. I believe as much is stated in John 1:1-14.

I do not believe that Acts 15 is suggesting that Christians can lie, steal, etc. etc., because such things were not included in the letter. Rather I believe that as Jesus said, the sum of the laws and the prophets, the spirit of them, is to love the Lord you God will all your heart, and your neighbor as yourself.

I don’t think that Mr. B.A.D. is very far from the truth here. Yeshua did spend much of his time correcting misunderstandings of the Law. God did give the Torah to Israel to set them apart from other peoples. Yeshua’s life and sacrifice did fulfill the spirit of the Law. The sum of the Law and the Prophets is to love God and neighbor.

But this is an incomplete understanding. Let’s look at each of these points in more detail.

Yeshua criticized those who live by the letter of the law instead of the spirit of the law.

Mr. B.A.D. is talking about the Pharisees in particular, I think. Here are some of the specific complaints Yeshua had against them:

It seems to me that all of this can be summed up in a single word: hypocrisy. Their problem wasn’t that they were obsessed with the letter of the Law. Their problem was an obsessions with appearing to keep the Law. They were so concerned with this appearance that the Law itself wasn’t enough for them. “Love your neighbor as yourself” isn’t showy enough for the Pharisaical mind. They had to make up more and more rules to follow so that everyone could see how very righteous they were, but in adding to God’s Law they were breaking the very thing they pretended to keep. They were hypocrites from their white-washed facades to their rotted cores.

I think Mr B.A.D.’s main point here is entirely correct. A preoccupation with the letter of the Law to the detriment of the spirit of the Law will destroy you, because it will tend to lead you to less obedience in the end, rather than more. It is easy to get lost in the details and forget what is most important. The individual commandments are not the goal, but only individual stones in the road. The goal is Yeshua, and we would all do well to keep our focus on him rather than on precisely measuring our tithes of mint and cumin.

The laws were given to the Jews in order to keep them ceremonially clean, and set aside for God.

The Law was given for many reasons, one of which was to keep the Israelites separate from the pagan nations around them, but this separateness is really more of an effect of the Law than an intent. God gave Israel the Law to teach them to behave better than the Canaanites, not just differently. The specific commandments weren’t arbitrary. God didn’t randomly pick which animals would be clean and unclean, or which fabrics they could and couldn’t mix.

Israel is a holy nation because God chose them from among all other nations to be his special possession. Holiness means “set apart for divine purpose”. Since he made them holy by election, he also wanted them to be holy by behavior. The goal of behaving differently isn’t just to stand out. The Pharisees were great at standing out from the crowd, but terrible at obeying God’s Law. Rather, the goal of God’s rules about behaving differently than the pagans, was to make Israel more beautiful and pleasing to him.

But that’s not the only reason God gave Israel the Law.

Paul wrote that the Law was also given to define sin for the whole world (Romans 3:19-20).

Now we know that whatever the law says it speaks to those who are under the law, so that every mouth may be stopped, and the whole world may be held accountable to God. For by works of the law no human being will be justified in his sight, since through the law comes knowledge of sin.
Romans 3:19-20

The whole world–not only the Jews–is accountable to God for their disobedience to the Law. As John wrote, sin is lawlessness, and he didn’t mean the laws of Rome or Babylon. He meant God’s Law. Sin is, by definition, breaking God’s Law. Now that we are saved from condemnation and our sins have been forgiven, are we supposed to forget what sin is and behave in whatever manner we feel is right? Of course not! God’s forgiveness of past sins is not a license to commit future sins.

Do we then overthrow the law by this faith? By no means! On the contrary, we uphold the law.
Romans 3:31

Now that we have been separated from the world, elevated to the status of a holy people along with the native-born Israelite, we demonstrate our gratefulness and maintain that separation by behaving differently than we behaved when we were still in sin. “Be holy, even as I am holy” in 1 Peter 1:16 is a quote from multiple passages in Leviticus. We have been made holy by divine action, and so God requires us to live accordingly by following the rules he gave for that purpose.

Do not be unequally yoked with unbelievers. For what partnership has righteousness with lawlessness? Or what fellowship has light with darkness? What accord has Christ with Belial? Or what portion does a believer share with an unbeliever? What agreement has the temple of God with idols? For we are the temple of the living God; as God said, “I will make my dwelling among them and walk among them, and I will be their God, and they shall be my people. Therefore go out from their midst, and be separate from them, says the Lord, and touch no unclean thing; then I will welcome you, and I will be a father to you, and you shall be sons and daughters to me, says the Lord Almighty.”
2 Corinthians 6:14-18

So when Jesus says that he did not come to abolish the law, but to fulfill it, his blood sacrifice has fulfilled the spirit of the law by making us clean before God and setting us aside for him.

When Yeshua died on the cross he fulfilled the commandment to love your neighbor as yourself more certainly than most of us ever will, but that doesn’t relieve us of the responsibility of continuing to love our neighbors as ourselves. He took our sin upon him and shed his own blood to fulfill the Law’s requirement for the death of murderers, Sabbath breakers, and the sexually immoral. Yeshua’s blood atones for us and removes us from under the condemnation of the Law, but that is still not a license to ignore God’s standards of behavior. He didn’t die so that we can eat bacon cheeseburgers and sleep with whomever we choose. He died so that we can have eternal life despite our failings.

Acts 15 is not suggesting that Christians can lie, steal, etc etc because such things were not included in the letter.

I agree, and this is something that many people overlook when they read that passage. For the sake of theological argument they interpret James’ ruling as the definitive list of moral behavior for Christians, but then say that Christians also have to keep a long list of other rules. This demonstrates that they don’t even believe their own arguments. Very few people actually think the apostles were really giving new converts permission to steal so long as they didn’t drink blood. The only logical conclusion is that the apostles were giving a starting point and expected the converts to continue learning and improving their behavior from there. What curriculum did they expect these gentiles to use for furthering their education in morality and religion? Torah.

For from ancient generations Moses has had in every city those who proclaim him, for he is read every Sabbath in the synagogues.
Acts 15:21

The controversy in Acts 15 was never about whether the Law applied to gentile believers in Yeshua–Romans 3:19 makes it clear that the Law applies to all people, believers or not–but about whether obedience to the Law was necessary for salvation. We are no longer “under the Law” because we have been set free from its power to condemn, but we are still accountable to God for keeping his commandments and maintaining his standard of acceptable behavior.

But some men came down from Judea and were teaching the brothers, “Unless you are circumcised according to the custom of Moses, you cannot be saved.”
Acts 15:1

Keeping the Law of Moses cannot remove the guilt of prior sins nor earn you eternal salvation, but if viewed properly, it can improve your life, your community, and your relationship with God. “Be holy, because I am holy,” God said, not because he wants us to be weird, but because he loves some behaviors and hates others. If we are the Bride of Christ, we should behave like it. What man wants his bride to wear filthy rags and smell like an outhouse?