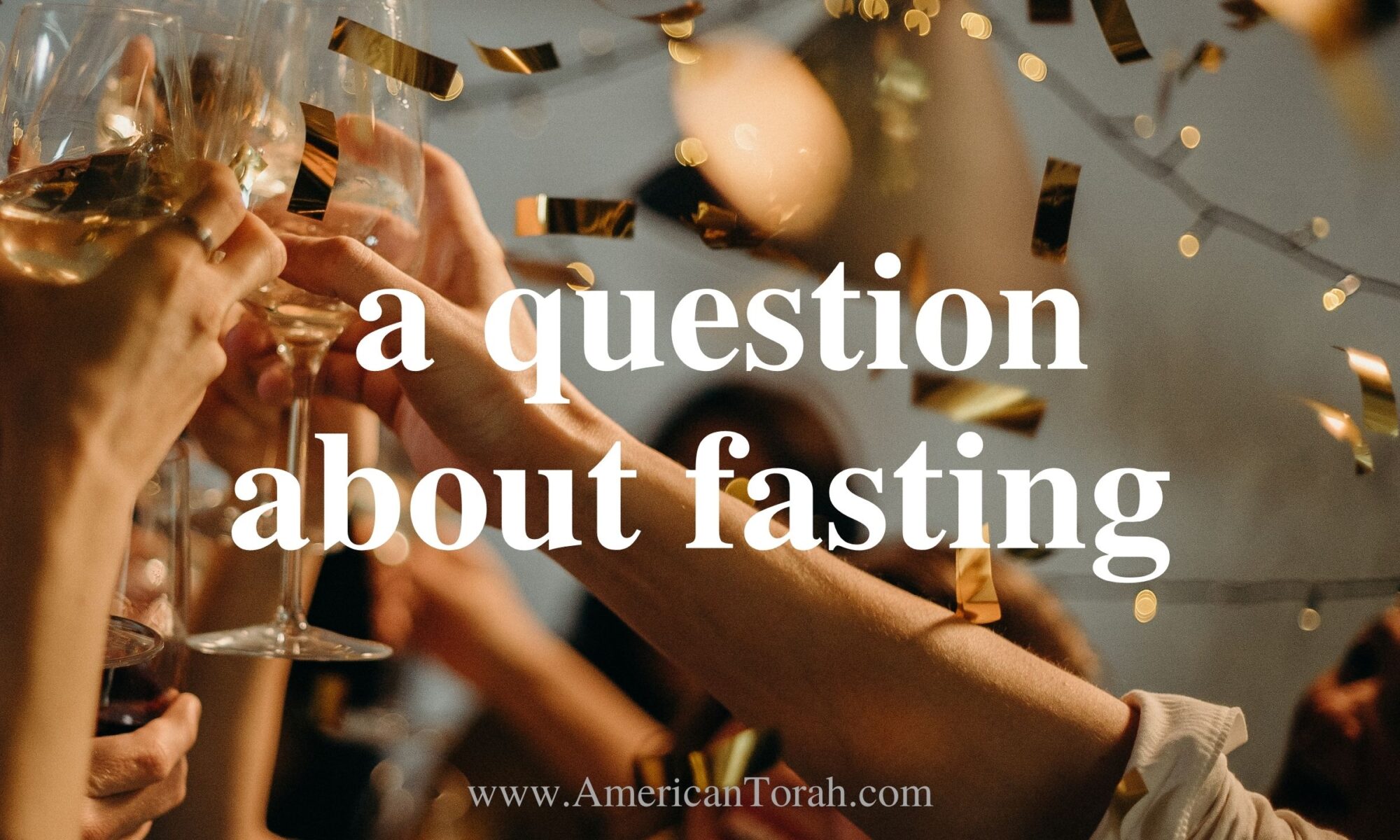 Yeshua was frequently confronted by members of the leading, Jewish, religious groups of the day, but the conversation in Matthew 9:14-17 wasn’t one of those times. In this passage, it wasn’t the Pharisees or the Sadducees, but the disciples of John the Baptist.

Then the disciples of John came to him, saying, “Why do we and the Pharisees fast, but your disciples do not fast?” And Jesus said to them, “Can the wedding guests mourn as long as the bridegroom is with them? The days will come when the bridegroom is taken away from them, and then they will fast. No one puts a piece of unshrunk cloth on an old garment, for the patch tears away from the garment, and a worse tear is made. Neither is new wine put into old wineskins. If it is, the skins burst and the wine is spilled and the skins are destroyed. But new wine is put into fresh wineskins, and so both are preserved.”
Matthew 9:14-17

Fasting has has been an integral part of religious practice in almost every religion throughout history. There’s a place for it in every theological system. Even atheists fast for the positive effects on mental and physical health. Religious Jews in the first century fasted at least one day each week, and religious Christians followed their example. But…back to John and his disciples…

Frequently, when the Pharisees asked Yeshua a question, he didn’t answer them directly. He gave them a roundabout answer, or he challenged them back, or he answered some other question that they didn’t ask. But these weren’t Pharisees and they weren’t trying to trap Yeshua with their question. They were sincere believers who really wanted to understand why they fasted frequently, while Yeshua and his disciples didn’t. So, Yeshua answered plainly through the use of three analogies: one about a wedding and the groom, one about patching an old garment, and one about putting wine into wineskins.

The Limits of Analogies

Whenever you’re dealing with analogies, you always have to be careful that you’re not taking the analogy further than the author intended. If an analogy was perfect, it wouldn’t be an analogy anymore. It would be the very thing that you’re analogizing.

Let me take an example from another Gospel passage.

Yeshua used another analogy when he was speaking with Nicodemus.

The wind blows where it wishes, and you hear its sound, but you do not know where it comes from or where it goes. So it is with everyone who is born of the Spirit.
John 3:8

The Spirit is like the wind in that you can’t see it directly, even though you can see its effects. The Spirit doesn’t behave like a gas, expanding to fill the available physical space. It doesn’t behave like matter, effected by gravitational forces, inertia, temperatures, etc. If the Spirit was exactly like the wind in every respect, then it would quite literally be the wind. At some point, every analogy breaks down, so if you try to carry it further than the author intended, you’ll also come to all kinds of unwarranted conclusions.

Matthew, Mark, and Luke all talk about this conversation and all three accounts include all three analogies together, so we can be certain that they are all part of the answer to the original question about fasting. I think understanding the meaning depends on keeping each analogy within the context of why Yeshua’s disciples didn’t fast.

The Bridegroom and His Friends

The wedding analogy seems fairly obvious. Weddings are festive occasions with food, drinks, and dancing. In today’s terms, if you were invited to a bachelor party or a wedding rehearsal dinner, would it be appropriate to fast at the event? Of course, not. It would be rude.

Consider the wedding at Cana in John 2. It was such a big party that the bridegroom ran out of wine! It would have been a social disaster for him, if Mary had not convinced Yeshua to work a miracle, turning six jars of water into the finest wine. It might seem like a minor thing to you and me, but in that culture, the host’s honor could have suffered severe damage. And just as it would be dishonorable for a wedding host to fail to provide sufficient food and wine for his guests, it would also be dishonorable for a wedding guest to refuse his hospitality.

Weddings and the preliminary festivities just aren’t the right time for fasting, and in this analogy, Yeshua’s disciples are like bridegroom’s friends celebrating his imminent marriage.

It’s tempting to push the analogy further and make comparisons to the church being the bride of Christ, and maybe that’s why Yeshua chose that particular analogy, but it wasn’t the point Yeshua was trying to make at the time. Remember that he was answering a question about fasting, not about eternal salvation, the messiah, or the end times.

No one puts a piece of unshrunk cloth on an old garment, for the patch tears away from the garment, and a worse tear is made.
Matthew 9:16

The connection between fasting and patching a garment is less obvious, but set aside all the sermons and Sunday school lessons that you’ve heard about this “parable”, and focus on what it actually says.

In ancient cultures, cloth was expensive. The average person might own a total of two sets of clothes, frequently only one. When a garment began to wear out, they didn’t throw it away and buy a new one. They patched it and patched it and patched it again. There is no reason to suppose that the person in this analogy would do any differently. The goal is to preserve the old garment, not replace it.

I’m sure you know that new clothes–especially ones made of natural fibers, and there was no other kind in the first century–can shrink significantly when you first wash them and sometimes continue to shrink for a few subsequent washes. If you were to take a piece of brand new cloth and sew it onto an older, cotton shirt, the patch will shrink the first time you wash it, and cause the shirt fabric around it to bunch up or possibly tear even worse than before. The right way to patch an older garment is with cloth made of the same material and then shrunk to the same degree. That way, when you wash it, the patch won’t shrink again.

Likewise, if you have a brand new garment that needs to be patched, you can either patch it with a matching, brand new piece of cloth, or you can wash the new garment until it is fully shrunk and use a pre-shrunk patch.

Just as there is a time to fast and a time not to fast, there is a kind of cloth to use as a patch on an old garment and another kind to use on a new garment. If you don’t patch a cloth correctly, you could do more harm than good.

Neither is new wine put into old wineskins. If it is, the skins burst and the wine is spilled and the skins are destroyed. But new wine is put into fresh wineskins, and so both are preserved.
Matthew 9:17

Think of the wedding at Cana again. When Yeshua turned the water into wine, the master of the feast remarked that the best wine is always served first, and the lesser wine served after everyone is at least a little intoxicated. The best wine in this context is the oldest, most fermented wine. In Luke’s account of Yeshua’s conversation with John’s disciples, Yeshua makes this point explicit:

No man also having drunk old wine straightway desireth new: for he saith, The old is better.
Luke 5:39 KJV

Clearly there’s no fault in the wine, whether new or old. The goal in this story is to preserve all the wine and all the wineskins.

As wine ferments, it releases gases. The vessel needs to be able to expand or release the gas. In this case, skins were the normal method of storing. New wine would be put into new pliable wineskins. The wineskin expands and eventually hardens as the wine matures. Once the skin has aged in this way, you can’t use it for new wine again, because the expanding gases will burst the wineskin. That doesn’t mean there’s anything wrong with the old wineskin. It’s still perfectly suitable for storing old wine, water, or any number of other substances.

For Everything There Is a Season

Yeshua frequently taught using parables, simple stories used to illustrate a theological idea. Recall the parables of the sower, the prodigal son, and the lost coin.

Luke 5:36 calls the analogies of the garments and wineskins “a parable”, and that’s technically correct since the Greek word really only means “metaphor”. However, although these analogies certainly illustrate an idea, there’s no real story in them. They aren’t a parable in the way we normally think of that term. They are simple analogies.

It’s tempting to ascribe deep meanings to every tiny element of a parable, but we can get ourselves into all kinds of unnecessary theological complications by doing so. The point of all three of the analogies in Matthew 9:14-17 (and Mark 2:18-22 and Luke 5:33-39) is really very simple: There is a time and place for everything, including fasting.

It’s not appropriate to fast at a party, sew a new cloth patch onto an old garment, or put new wine into old wineskins. Fasting is good and celebrating is good. You just don’t mix the two, or you risk ruining both.

One Reply to “Matthew 9:14-17 and the Three Fasting Parables”