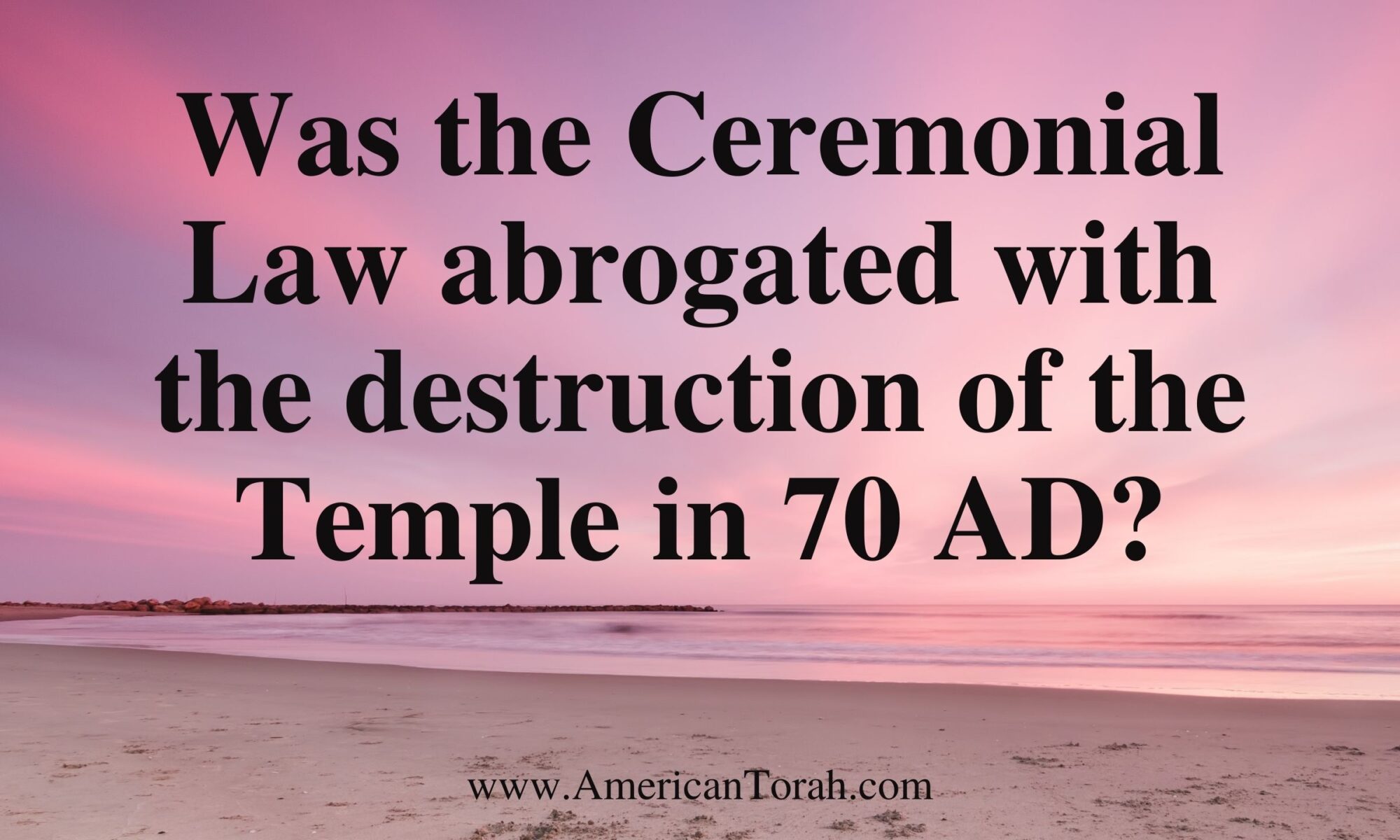 The ceremonial laws were ultimately abrogated when the Temple was destroyed in AD70. -Freddy

I’m not really sure what to think of Christians basing their theology on extra-biblical historical events rather than on the clear statements of God. Is it appropriate to call yourself a Christian when you don’t even believe what Christ said?

Do not think that I have come to abolish the Law or the Prophets; I have not come to abolish them but to fulfill them. For truly, I say to you, until heaven and earth pass away, not an iota, not a dot, will pass from the Law until all is accomplished.
Matthew 5:17-18

I can see interpreting “until all is accomplished” to mean “until I have been crucified and resurrected”. I disagree with that interpretation, but I can see the logic in it. I can’t see how it could apply to the destruction of the Temple.

What was the “all” that was accomplished in 70 AD? An extreme preterist would say that all prophecy was completely fulfilled in or prior to that year, including the second coming of Yeshua, the total destruction and recreation of heaven and earth, and the resurrection and judgment of all the dead. Extreme preterism is so bizarre, in my opinion, and its adherents so far removed from solid scriptural understanding, that I don’t think they would accept any argument I might make, even if I were inclined to make them. So I won’t.

Which laws are the ceremonial ones that Freddy believes were abrogated? Only those that pertain to the Temple? That would be consistent with his statement, at least, but which laws are those exactly?

It is common among many Bible teachers to divide the Law into three categories: civil, ceremonial, and moral. Since this division is purely manmade and entirely foreign to the Bible, nobody can agree on which laws are in which category. Is circumcision ceremonial or moral? The command to circumcise our sons on the eighth day preceded the Levitical priesthood by about 430 years, so it can’t reasonably be tied to the Temple. The commands to keep the weekly seventh day Sabbath, the Passover, and the week of Unleavened Bread all preceded Sinai and any hint of the Levitical priesthood, as did the practice of giving the firstborn of the herds to God. If “ceremonial laws” are those that pertain to the Temple, then these can’t be ceremonial.

The bottom line is that people just don’t want to keep God’s commandments, so they search for excuses and invent rationalizations for their disobedience. The destruction of the altar is a very good reason not to offer blood sacrifices since God commanded that they must be done at the altar in Jerusalem, but that still doesn’t mean the commandments themselves have been abrogated. It just means that our circumstances preclude full obedience, so we’ll have to rely on God’s grace to forgive us. Ultimately, 70 AD a semi-arbitrary point in time that can be used to superficially justify expiring any obligation to keep the more awkward and “Jewish” of God’s instructions.

If one were to point to a historical event and say “the Law ended here” Calvary would make a little more sense, but still not enough to pass Scriptural muster. Somebody forgot to tell the Apostles, who continued to attend worship and offer sacrifices at the Temple throughout the book of Acts. When asked how new converts should behave, they said (heavily paraphrasing), “Don’t commit sexual immorality, don’t eat blood, and, oh by the way, Moses is read in every synagogue of the Empire, so go listen and keep learning.”

That’s why I’m here, encouraging Christians and all believers in Yeshua, whatever label they apply to themselves, to study and learn to keep the Torah out of love and respect for the Heavenly Father and Messiah Yeshua.