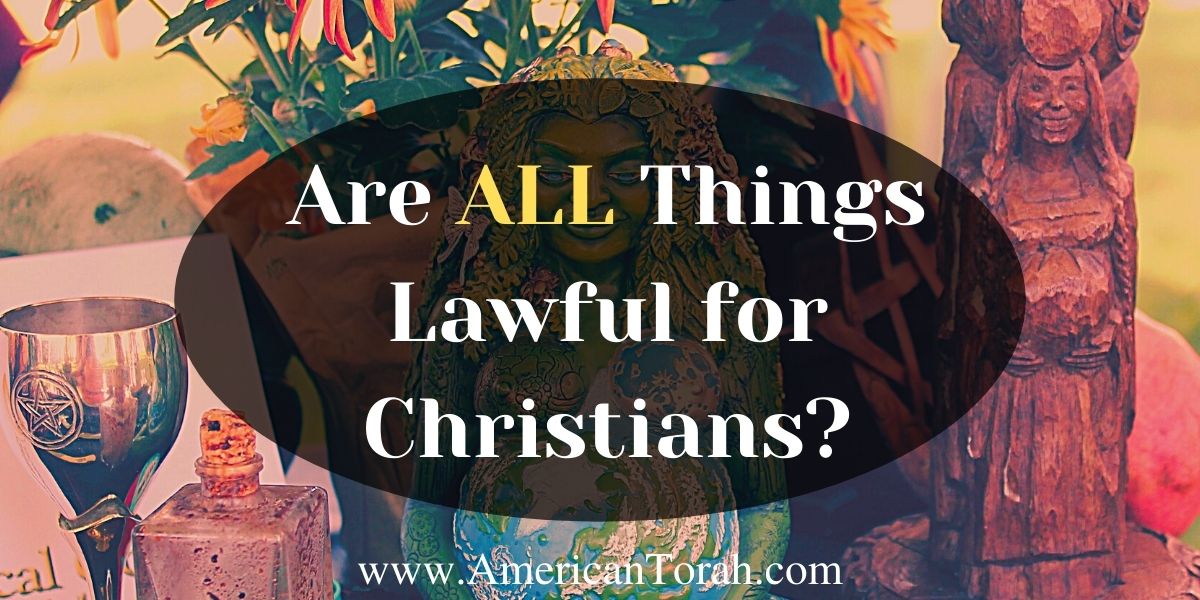 “All things are lawful,” but not all things build up.

But if someone says to you, “This has been offered in sacrifice,” then do not eat it, for the sake of the one who informed you, and for the sake of conscience— I do not mean your conscience, but his. For why should my liberty be determined by someone else’s conscience? If I partake with thankfulness, why am I denounced because of that for which I give thanks?

So, whether you eat or drink, or whatever you do, do all to the glory of God. Give no offense to Jews or to Greeks or to the church of God, just as I try to please everyone in everything I do, not seeking my own advantage, but that of many, that they may be saved.

As with every line written in every personal letter, context is key to understanding the author’s intent. Paul’s main point in this passage didn’t begin in verse 23, but in chapter 8, verse 1: “Now concerning food offered to idols…” The full conversation didn’t begin even there, but in a previous letter written to Paul by the believers at Corinth, a letter that has been entirely lost to history.

From 1 Corinthians 8:1, we know that Paul was responding to a question about eating the meat of animals that had been sacrificed to idols on pagan altars. He told them that offering a sacrifice to a pagan deity does nothing at all to change the nature of the meat itself, so long as you aren’t actually participating in the sacrificial rite. Even eating the meat in the pagan temple, doesn’t itself make the eating sinful if you are only eating meat with no regard to the location, the false god, or the ritual.

Eating meat that has been sacrificed to an idol becomes a problem in three circumstances:

In chapter 10, Paul made the argument that eating the meat might be perfectly lawful, but that doesn’t make it a good idea. When you’re in gray areas like this, in which specific circumstances can make all the difference, you should tread lightly.

What he does not say is that any of God’s commandments have been canceled or that we are free to ignore them when we feel like it.

However, even if we take those phrases as Paul’s own words, we need to interpret them in the context in which he was writing. He certainly didn’t mean for us to think that all sexual immorality and idolatry are lawful, because he wrote “we must not indulge in sexual immorality” and “flee from idolatry” just a few verses earlier in the same chapter.

We can’t extend “all things” to eating pork and people unless we also extend it to eating blood and engaging in sexual immorality. Yet, even if Paul hadn’t addressed those things already, in Acts 15:20 James clearly says that eating meat sacrificed to idols (participating in the idolatry), eating blood, and sexual immorality are the most basic of all moral standards. These are the very first rules that a new convert from a pagan religion to faith in Yeshua (Jesus) needs to adopt in order to fellowship with other believers, but they are not the entirety of godly living.

The context is idolatry, not clean and unclean animals. Even his statement about sexual immorality is about pagan temple prostitution and sexual acts as worship. If we allow the text to define itself, then we can’t reasonably conclude that Paul said anything except that eating meat that has been sacrificed to idols is not strictly a sin as long as we aren’t participating in the idolatry.

Neither James nor Paul taught that “eating all things of all kinds is lawful”. Rather, they taught that as followers of the Messiah, we need to make wise and biblically informed distinctions between clean and unclean and between prudent and imprudent.

One Reply to “Are All Things Truly Lawful?”