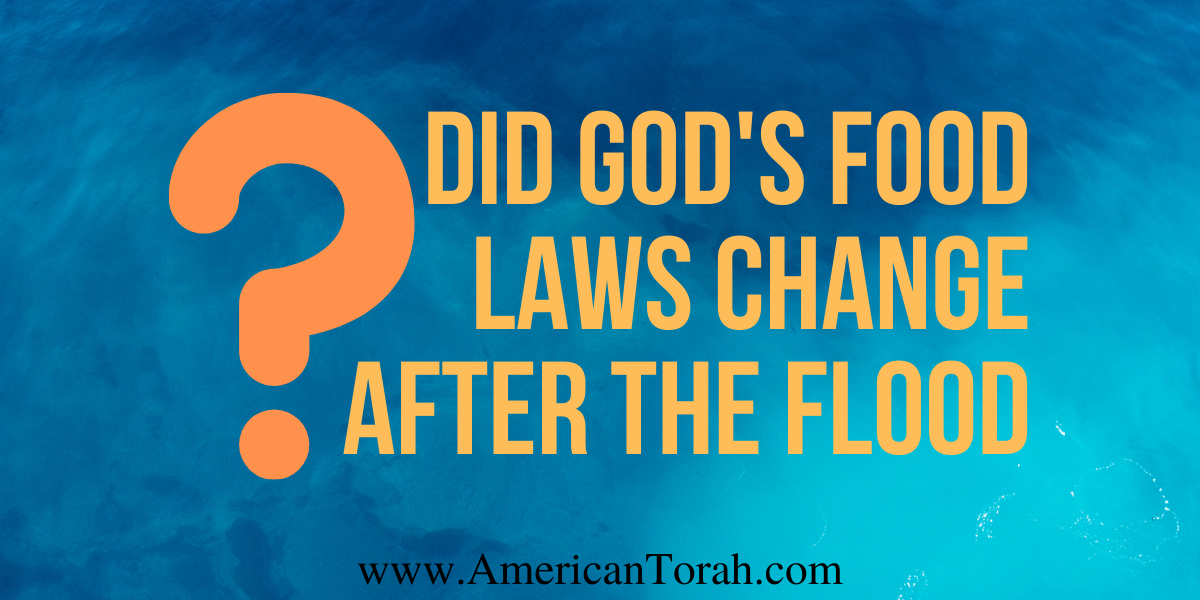 Being a Torah observant follower of Yeshua (aka Jesus) means living according to God’s instructions as given to Moses (aka Torah) and as illustrated and explained by Yeshua, including those rules that pertain to diet. Food is a very personal thing and other Christians are frequently dumbfounded that I don’t agree with them that God’s rules for eating were canceled by Jesus. Just read Mark! Read Romans! Haven’t you read Galatians!? Etc. Pick a New Testament book and there’s probably a verse in it that someone will interpret to mean that God no longer cares what anyone eats. I am convinced beyond any doubt that the vast majority of people–even well-educated and sincere believers in Jesus–have never even considered that those verses might be interpreted in some other way, let alone done any serious study on the matter.

American Torah (and other websites that have published my articles) holds other articles on this topic, but the same “counter” verses come up often enough that I think it’s worthwhile to the most common, including what they say and what they are claimed to say. I don’t have the time or inclination to address every possible relevant Bible passage, of course, but I hope that I will be able to add something useful to the collective dialog and encourage you to reconsider what you have been taught or what you might assume about others.

I will add the tag “kosher” to this and other articles on this topic so that you can easily find them here at American Torah and over at Soil from Stone.

And I will begin with The Beginning, Genesis…

And God said, Behold, I have given you every plant yielding seed that is on the face of all the earth, and every tree with seed in its fruit. You shall have them for food.
Genesis 1:29

Every moving thing that lives shall be food for you. And as I gave you the green plants, I give you everything.
Genesis 9:3

God told Noah he could eat every living thing. Doesn’t that mean we can eat pigs and lobsters?

If you get your drivers license and I tell you, “Congratulations! You can drive all kinds of cars now,” do I really mean that you are free to drive any and every motor vehicle you can find? No, because not every vehicle is yours, some vehicles require special licenses and training, and other vehicles are illegal to drive on regular roads. I think these two Genesis phrases would have been better translated as “the seed-bearing plants” and “the living things” to convey the intended meaning.

Leviticus 11:3 says, “Whatever parts the hoof and is cloven-footed and chews the cud, among the animals, you may eat.” Does that mean that every cow is available for food to anyone? Clearly not. God did not give anyone permission to kill and eat his neighbor’s cow.

Let me give you a scenario as an illustration.

Your town has an ordinance against driving 18 wheelers on any streets within town limits. You don’t own an 18 wheeler, but your neighbor does. Are you allowed to drive his 18 wheeler on a country road without his permission? No, you aren’t. Not because of the town law–that doesn’t apply on country roads–but because it’s not your truck.

Now, if you take it into your head to become a long haul truck driver, you can get your CDL and purchase your neighbor’s rig. Then you will be free to drive it on that country road, but still not in town, not because it is illegal for you to drive an 18 wheeler, but because it remains illegal to drive it in town. If your neighbor had only loaned you his truck, instead of selling it, with the condition that you can only drive it downtown, you would be no more legally authorized to drive it than before, because his consent in the matter has no effect at all on the town’s ordinance against 18 wheelers within town limits.

Before the Flood, before God allowed Noah to eat animals, he told Noah to take seven pairs of every kind of clean animal into the Ark with him (Genesis 7:3), so God’s laws concerning what makes an animal clean or unclean existed and were in force at that time. God’s laws concerning what makes an animal edible to humans are identical to those that distinguish clean from unclean, and so it seems to me that those laws were also in force prior to the Flood, prior to God granting Noah permission to eat animals.

On the sixth day of Creation, he gave the Garden into Adam’s custody, but not for every purpose that Adam might desire. Adam’s responsibilities as a gardener allowed him to prune and harvest the trees, but not to burn the whole place down. Everything belongs to God, every rock, tree, animal, and person. Before the Flood, cows and sheep were perfectly edible to humans, but they belong to God, and God was (and is) free to disallow mankind to kill his cattle for food, not because it is immoral to eat a cow, but because it is immoral to eat someone else’s cow.

God’s instructions to Noah were not a change in his eternal Law that says “You may eat this kind of animal, but not that kind.” Rather, they were a change in how much authority over his own possessions God had delegated to mankind, much like a farmer allowing his hired hands to take a few chickens home with them in addition to their daily allotment from the harvest.

If God changed the rules about what we can eat once, could he change them again?

Leviticus 11 and Deuteronomy 14 are the primary passages of Torah that tell us which animals are clean and therefore suitable for food. (See this article for a brief explanation of what clean and unclean means.) God’s Laws concerning clean and unclean animals predate Noah, Abraham, and Moses and haven’t changed.

But if God can change the wages of mankind from plants alone to plants and animals, can he also reduce those wages again to plants only? Or to animals only?

I don’t see any reason why he couldn’t. They and we are all his creations to do with as he chooses.

However, he would need to send a prophet to tell us of the change in such a way that nobody would have any excuse for not recognizing his authority and the truth of his message. The last two times God sent such a message, the prophet who delivered it was the supreme, unquestioned human authority on earth. I am unaware of a single human being in over 1900 years whom I could point to as a certain and true prophet, let alone one with such unimpeachable credentials. If a prophet carried a word from God that was so fundamental to human existence as the revocation of permission to eat animals, surely it would have to be delivered in a similar manner to the original granting of permission.

Perhaps when Messiah Yeshua returns to establish his earthly kingdom in the land of Israel, he will make such a decree. I doubt it, but who am I to say?