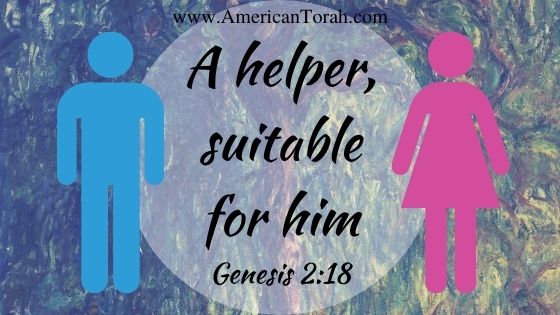 Then the LORD God said, “It is not good that the man should be alone; I will make him a helper fit for him.”
Genesis 2:18

Men and Women are Not the Same

According to Adam Clarke (Commentary on the Bible), the Hebrew for “help meet for him,” ezer kenegdo, “implies that the woman was to be a perfect resemblance of the man, possessing neither inferiority nor superiority, but being in all things like and equal to himself.” He was right to an extent.

Mankind, both male and female, is unique among God’s breathing creations, those beings that Scripture calls nephesh, or souls. This is confusing to many English speakers because we often use the terms “soul” and “spirit” interchangeably, but they don’t mean the same thing in the Bible. A soul is a living being, while a spirit is the incorporeal part of a person that carries on the essence of the person after the body dies.1

Eve was like Adam in that she was of the same kind of being, mankind, somewhere between angel and beast. Like Adam, Eve was a living soul in possession of a body, spirit, and mind. She shared his divine mission of caring for the Garden and, by extension, the whole Earth. She shared in his authority and in his role as a connection between the eternal Creator and his temporal creation.

But Eve was never “a perfect resemblance of the man, possessing neither inferiority nor superiority.”2 The physical differences between men and women are obvious. Sane people do not allow men to compete in women’s athletic events, even if those men are pretending to be women. Every society that has every existed has recognized the sexual dimorphism of humanity, sorting men and women into activities that are best suited to their capabilities. Among hunter-gatherers, men almost always do the hunting, fighting, and heavy lifting, while women almost always do the gardening and textile work, which might be even more challenging in their ways, but don’t require the same strength or speed.3

The mental differences are intuitively apparent to most people. Think of the joke about men being a machine with a single switch and women being another machine covered in switches, dials, gauges, and buttons without a hint of what they’re supposed to do. The joke is an exaggeration, of course, but still close enough to the truth to be funny. The mind is significantly more opaque than the body, so the differences between the sexes is harder to quantify, but the work of many reputable researchers, astute observers of human behavior, and less reputable (but possibly more effective) proponents of dating Game, have established their existence and general parameters beyond reasonable argument.

The spiritual differences between men and women are not so obvious. They are evident, however, in the spiritual and hierarchical roles into which men and women have almost universally organized their activities, in the Creation story of Genesis, and in the many scriptural examples of and references to the differently ordained roles of men and women.

Consider just a handful of many dozens of examples:

At about this point, some readers might be thinking to themselves, “My! What a misogynist!” But how so? If I say that elms make better shade than palms, does that mean I am somehow anti-palm trees? If I say that dump trucks haul more rocks than do refrigerated panel vans, am I saying anything against refrigerated panel vans? Of course not, to both questions. I am merely pointing out that some things are better at one thing than another.

I am also not saying that women have no legitimate role in ministry or leadership. Although men are more suited to many kinds of leadership and a preponderance of women in leadership is almost certainly a symptom of a society in trouble, God never said, “Thou shalt not suffer a woman to lead.” Scripture records a number of prophetesses and one God-ordained woman who served as the national Judge of Israel at a time when men were weak and cowardly.

Men and women are different physically, mentally, and spiritually, and it would be impossible for them to be equally suitable to performing the same tasks or filling the same roles. To insist otherwise is actually anti-man and anti-woman by disregarding their unique strengths and weaknesses.

A Help Meet for Him

If it’s not clear already, the term “help meet” (often mistakenly given as “help mate”) doesn’t mean that Eve was created to be Adam’s slave. In fact, Moses and David both used the same word to refer to God as their own helper. (Exodus 18:4, Psalm 33:20, 70:5) Surely they didn’t think of YHVH as a personal servant to be summoned and ordered about at will! God is the indisputable superior in those relationships, yet he is still called a helper.

In Ezekiel 12:14, God refers to the personal attendants–whether guards, aides, or mercenaries–of the King of Judah with this same word. So ezer ultimately implies neither inferiority nor superiority. Rather than a servant, ezer implies an ally, an indispensable supporter, and even a rescuer.

The Hebrew phrase ezer kenegdo literally translates to “a helper suitable to him”–“Meet” is an archaic English synonym of “suitable”–and by itself the word doesn’t necessarily imply any kind of hierarchal relationship at all.

So then what does it mean for Eve to be a help meet for Adam?

The fact that she was made specifically for Adam’s purposes, and not for her own, demonstrates that God’s intended purpose for her was to assist Adam in his divinely appointed mission, not to launch a separate mission of her own.

Genesis 2:15 says that God placed Adam in the Garden to keep it, but he immediately recognized that Adam could not effectively perform the task unaided, and so v18 says “It is not good that the man should be alone.” Before God created Eve, he brought all of the animals to Adam to examine and name them. The naming is explicit in the text, while the examination is implied by the context and the ancient Hebrew practice of naming a thing according to its character and behavior.

The man gave names to all livestock and to the birds of the heavens and to every beast of the field. But for Adam there was not found a helper fit for him.
Genesis 2:20

One of the purposes of this naming exercise was to demonstrate to Adam that none of these lesser creatures could ever be an adequate help in Adam’s primary task of caring for the Garden. God created Eve immediately afterward and, from God’s reaction, we can know that Adam was acutely aware of the animals’ entire deficiency:

Then the man said, “This at last is bone of my bones and flesh of my flesh; she shall be called Woman, because she was taken out of Man.”
Genesis 2:23

Eve was like Adam in a manner that no other creature could approach. She walked on two feet and manipulated the world with hands, fingers, and opposable thumbs, just like Adam. She spoke, laughed, reasoned, and loved like Adam, and, like Adam, she was, in her being, the image of God and carried within her the same breath that God exhaled into him.

God didn’t create Eve merely to be Adam’s friend, but she was his friend more profoundly than any of the animals could ever be. A horse can bear a man across country, a dog can show him affection, and an ox can help him plow a field, but none of these can carry on a conversation, help him solve a complex problem, bear his children, or offer him any wisdom. A wife can do all of these things and more.

It is abnormal for a woman to lead a nation or to be a spiritual teacher over men, but it is certainly no sin, and it is sometimes quite necessary. When a woman steps into a leadership role because the man who should be there is unavailable, unable, or unwilling, she is, in fact, fulfilling her purpose as a “helper suitable to Adam”. It’s a long way from God’s original ideal, but, in his wisdom, his plan included remedies for less than ideal conditions, and we should all thank God for women who are willing to step up to leadership roles when men fail!

God created Adam and appointed him to a task before he created Eve. From this we know that Eve’s purpose is to aid Adam. But God also purposefully created Adam incomplete and unable to perform the task to which he had been set, so that he would love Eve and fully appreciate his need for her.

I suspect that we would all live happier, more fulfilling lives if we didn’t fight so hard against God’s plan and instead used it as a blueprint for our marriages, families, and civil governments.

1 Major tangent: Like God, man is a tripartite being, a living soul, made up of body, spirit, and mind. Our bodies are made up of numerous, complex organs and systems that are also made up of complex, interconnected systems. Our consciousnesses, the part of our thoughts and minds that can’t be dissected and objectively measured, also appear to contain separate systems and components. What about our spirits? We know almost nothing about them, and anyone who claims otherwise is most likely either a con-artist or under demonic influence. However, we do know that God’s Spirit is seven-fold in some manner (Isaiah 11:2; Revelation 1:4, 3:1, etc.) and probably more complex in ways that we couldn’t possibly understand. What might that say about our own spirits? Or about the anatomy (for lack of a better word) of the rest of God? Purely academic questions, of course. There’s no way to answer them and probably little value in spending a lot of time thinking about it.

2 I’m sure Clarke never meant to imply that men and women are equal in a mathematical sense, but many people to day really do believe his statement to be literally true despite all evidence and reason.

3 Goldberg, Stephen. The Inevitability of Patriarchy. New York: William Morrow & Company, Inc., 1974. 228. “…the central fact is that men and women are different from each other from the gene to the thought to the act and that emotions that underpin masculinity and femininity, that make reality as experienced by the male eternally different from that experienced by the female, flow from the biological natures of man and woman…the women of every society have taken the paths they have not because they were forced by men but because they have followed their own imperatives.”