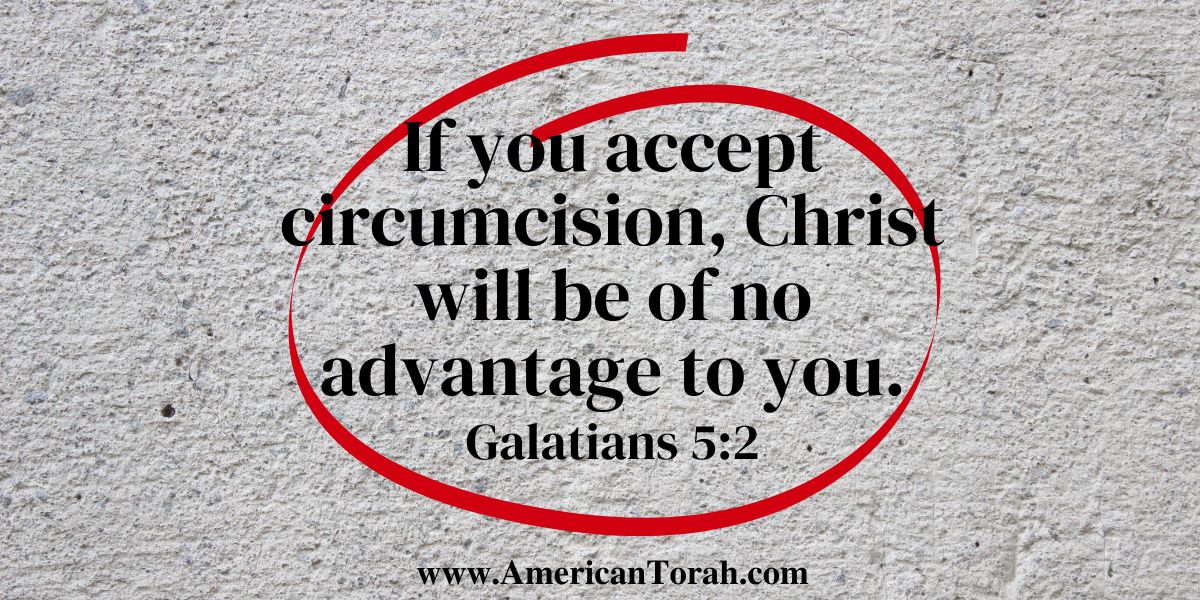 Look: I, Paul, say to you that if you accept circumcision, Christ will be of no advantage to you.
Galatians 5:2

Those are pretty strong words. What should we tell the hundreds of millions of American men? Sorry. You missed the boat. You now have to obey every “jot and tittle” of the Law or you’ll go to Hell. Of course not. Nobody believes that the physical condition of being circumcised equates to a rejection of salvation by grace.

What most people actually believe is that if a man voluntarily becomes circumcised as a religious act of obedience to God’s command, only then has he rejected Yeshua’s work on the Cross. By legalistically adhering to an outmoded command, he acts as if Yeshua’s death and resurrection accomplished nothing.

That certainly sounds like a reasonable interpretation. It doesn’t condemn innocent children for things outside their control, and it emphasizes the liberty we have in Christ. It sounds good, but is it?

Keeping in mind Peter’s admonition that a correct understanding of Paul’s letters requires a solid grounding in the Torah and Tanakh (2 Peter 3:15-16), we shouldn’t assume that the first reasonable interpretation of Paul is actually correct. We need to see what the rest of Scripture says. The older Scriptures have plenty to say about circumcision and salvation by grace, but in this case, I think we need look no further than the book of Acts.

In Acts 15, some Jewish men were teaching gentile converts that they needed to be circumcised in order to be saved. Paul brought this to the attention of James and the other elders at Jerusalem and they ruled that new converts from among the gentiles did not need to be circumcised or convert to Judaism. (See “Does Acts 15 Say We Can Ignore God’s Law” for more details.)

Paul then wanted to visit the believers in every city he had previously preached, in part to check on their progress, but also in part to share this news with them. One of his companions on this journey was to be Timothy, whose mother was Jewish, but whose father was Greek. By Biblical standards–if not by modern rabbinic tradition–this made him a gentile by birth, not a Jew, and he was uncircumcised.

According to the common Christian interpretation of Paul’s words in Galatians 5:2 and James’ words in Acts 15, Timothy’s salvation depended on him remaining uncircumcised. Yet, Paul circumcised Timothy who, being a grown man, voluntarily underwent the procedure!

Paul wanted Timothy to accompany him, and he took him and circumcised him because of the Jews who were in those places, for they all knew that his father was a Greek. As they went on their way through the cities, they delivered to them for observance the decisions that had been reached by the apostles and elders who were in Jerusalem. So the churches were strengthened in the faith, and they increased in numbers daily.
Acts 16:3-5

So Paul, who said that circumcision equaled damnation, circumcised Timothy right after the Jerusalem Council said that no gentile should be circumcised?

Either Paul was a hypocrite, making Timothy to live like a Jew while teaching the Galatians to live like gentiles, exactly what he accused Peter of doing in Galatians 2:14, or else Galatians 5:2 does not mean that undergoing circumcision is tantamount to rejecting Yeshua.

Only the latter argument–that circumcision is not rejection of Yeshua–is consistent with the whole of Scripture. The former makes Paul a hypocrite, Timothy a condemned legalist, and James an antinomian libertine.

In several places in Acts, Luke writes that the great controversy that followed Paul was whether or not a person must be circumcised and keep the whole Law of Moses in order to be saved (E.g. Acts 15:1). The Torah, the Tanakh, the teachings of Yeshua…all of these things stand against such a teaching. The issue was never about whether or not circumcision is a good or bad thing. It was always about salvation and the minimum requirements for fellowship with other believers.

The Situation in Galatia

There were two parties fighting for control of the church in Galatia. On the one hand, there were the followers of James and Paul teaching them that salvation is only through faith in the grace of God, and that obedience to God’s laws can be learned over time. On the other hand, there were the Judaizers teaching that everyone must submit to the authority of the rabbis and the centuries of tradition built up on top of the Law before they could be truly considered “saved”.

When Paul wrote, “if you are circumcised, Christ shall profit you nothing,” he was writing only within the context of this argument. He was saying, “If you join the party of the circumcision and rely on that for your salvation, then the Messiah is wasted on you.” He was absolutely not saying that circumcision under the right circumstances (for example, on the eighth day after birth) or for the right reasons (for example, to eat the Passover lamb in Jerusalem) is a bad thing.

And if Paul’s actions with Timothy aren’t enough to prove my point, let’s go back to Galatians 5. Just two verses further down, he makes the controversy explicit:

You are severed from Christ, you who would be justified by the law; you have fallen away from grace.
Galatians 5:4

To whom is Paul addressing these comments? “You who would be justified by the law”, not people who want to live a holy life or keep God’s commandments just because God said so. There was a group of people in Galatia (and many other places around the Roman Empire) teaching new converts from among the gentiles that they could not be justified in God’s eyes until they were circumcised and fully converted to Pharisaical Judaism, with all of its burdensome traditions.

Obedience to God Does Not Put One “Under the Law”

Paul wasn’t even opposed to all man-made traditions. According to Torah (God’s Law), there was no reason for Paul to circumcise Timothy. He wasn’t an eight-day-old infant and he wasn’t about to eat the Passover. Yet he did it anyway just to avoid unnecessary controversies with Jewish believers in the scattered congregations. He did not circumcise Timothy to make Timothy Jewish or to ensure his salvation.

Undergoing circumcision does not put anyone under the Law unless he does so because he thinks he will earn special favor with God or eternal salvation by it. Being “under the Law” is to be subject to its curses and under its authority as a law breaker. No one who has put his trust in God for his eternal salvation is under the Law, because our law-breaking has been forgiven and our status has been elevated from slave to son.

That does not mean that the Law no longer applies to us. It means that we are not condemned by it. We don’t have to worry and stress about getting it perfectly. We can learn to walk in greater obedience to God’s instructions over time instead of being afraid that every misstep will earn God’s eternal wrath. Instead of being afraid, we can focus on serving God in our daily lives, on loving him and sharing his love with those around us while we use his Torah to help us learn what that really means.

3 Replies to “Is Christ Useless to the Circumcised?”