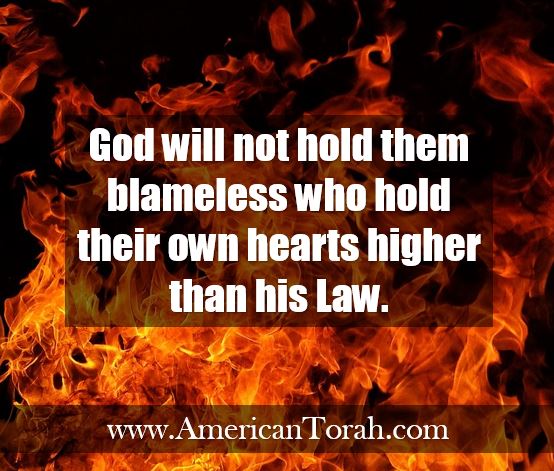 Leviticus 10:1-11 “Nadab and Abihu…offered strange fire before the LORD, which he commanded them not.”

When addressing the age-old spiritual pathologies of feminism, humanism, and hedonism, there is no passage more appropriate than Jeremiah 17:9. “The heart is deceitful above all things, and desperately wicked: who can know it?”

Nadab and Abihu evidently held to the same maxim as feminism and today’s emasculated church: “Listen to your heart.”

I believe they meant well. They wanted to express their devotion to God in a dramatic way, but it is not man’s place to decide when, where, or how to worship God.

Perhaps the most difficult aspect of this story to understand is Moses’ instruction to Aaron and his remaining sons. They were not allowed to touch the bodies nor show any grief or sympathy for the two dead men. They appear to have been in the middle of consecrating the Tabernacle for its first use, and Moses said that if they were to leave the Tabernacle or disrupt the ceremony before the consecration was complete, they would die. That’s not because they were weak, but because there are dangerous spiritual forces at work in the world, both good and evil.

God allows us a wide margin of freedom in showing our love for him, as fathers do their children, but every good father imposes rules for the health and safety of his family. There are some tasks in a house which are only appropriate for more mature children and only appropriate at certain times and when done in certain manners.

There are also tasks in God’s kingdom which he has set apart with more specific guidelines, and not all of them have to do with the Levitical Priesthood. In fact, most of them don’t.

God also gave us instructions on crime and punishment, clothing, diet, and family relationships. None of his instructions are arbitrary. They are all given for our benefit, to keep God’s house healthy and family safe.

He appointed men to be the heads of their wives and the spiritual coverings of their houses, for example. When they abdicate their authority, their families suffer. When women attempt to take on those roles, they are more likely to be harmed than blessed, not because women are weaker, but because they are the wrong tools for the job. A voltmeter is a great tool, but it makes a very poor hammer.

When our hearts lead us to actions contrary to God’s design, they deceive us and leave us vulnerable to consequences which we might not foresee or to attacks against which we are not prepared to defend. It’s better to accept God’s design without understanding than to rely on your own understanding and be burned like Nadab and Abihu.

When a wife consciously rejects her husband’s covering–or a child rejects his father’s or, indeed, when any person rejects the covering of God’s instructions–based solely on the feelings in her heart she must accept the consequences of her own actions. Courts and other sympathizers who would blame her husband for her actions insult the woman by treating her as completely incapable of controlling herself, and they treat her husband unjustly.

Nadab and Abihu walked their own path instead of the one that God had mapped out for them. No one forced them to act outside the covering of their priestly calling. They were not deceived by anything outside themselves, and no one else could accept any blame. They followed their hearts and they died for it.

God will not hold them blameless who hold their own hearts higher than his Law.