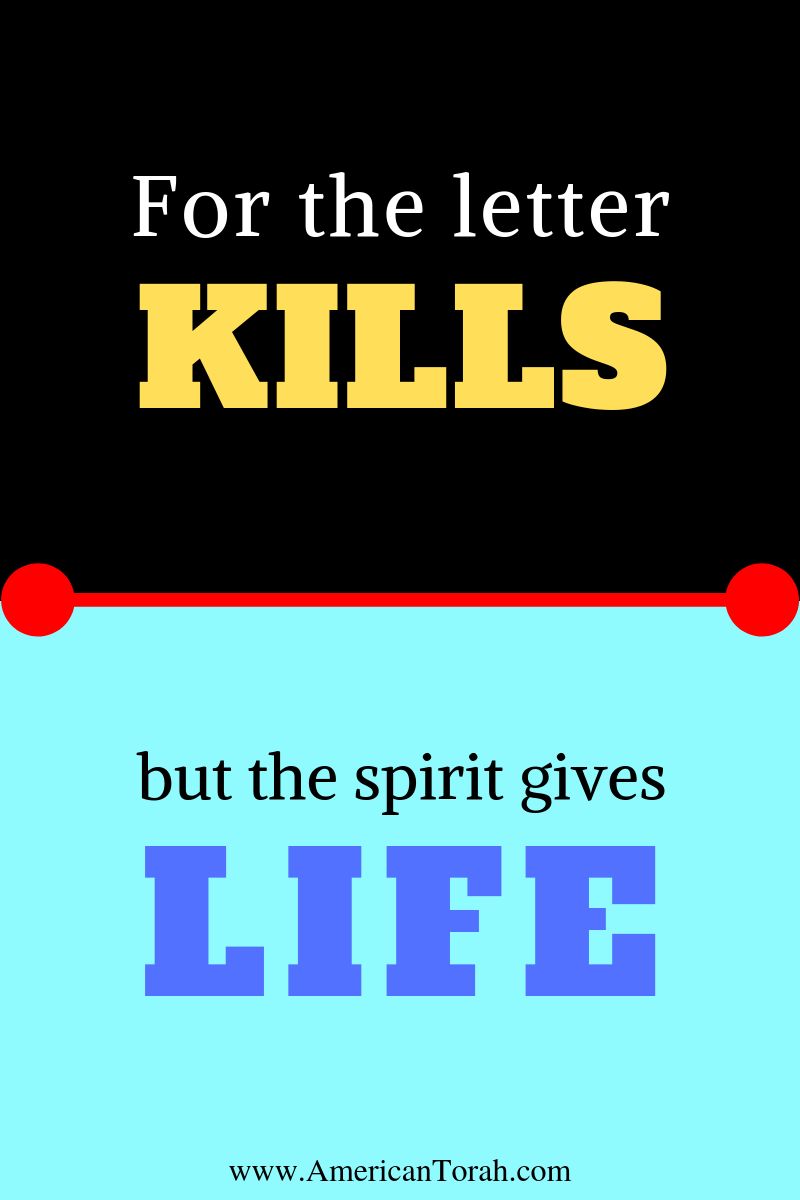 …Our sufficiency is from God, who has made us sufficient to be ministers of a new covenant, not of the letter but of the Spirit. For the letter kills, but the Spirit gives life. Now if the ministry of death, carved in letters on stone, came with such glory that the Israelites could not gaze at Moses’ face because of its glory, which was being brought to an end, will not the ministry of the Spirit have even more glory? For if there was glory in the ministry of condemnation, the ministry of righteousness must far exceed it in glory. Indeed, in this case, what once had glory has come to have no glory at all, because of the glory that surpasses it. For if what was being brought to an end came with glory, much more will what is permanent have glory.
(2 Corinthians 3:5b-11)

The passage above is often treated as if it’s contrasting the Old Covenant with the New or God’s Law with a new “Law of the Spirit”.

Interpreting it to mean that the Old Covenant or God’s Law kills, while the New Covenant or new law gives life is natural in light of the antinomian standard of modern Christian theology, but, as with all erroneous interpretations of Paul, it sets the reader up to get hopelessly lost in contradictions.

For we hold that one is justified by faith apart from works of the law….Do we then overthrow the law by this faith? By no means! On the contrary, we uphold the law.
(Romans 3:28,31)

So the law is holy, and the commandment is holy and righteous and good. Did that which is good, then, bring death to me? By no means! It was sin, producing death in me through what is good, in order that sin might be shown to be sin, and through the commandment might become sinful beyond measure. For we know that the law is spiritual, but I am of the flesh, sold under sin.
(Romans 7:12-14)

When Paul wrote that “the letter kills, but the Spirit brings life”, he was clearly not saying that the Law of God as given through Moses kills, and that we must reject the written Law in order to live in the Spirit. Throughout his letters in the New Testament, Paul continually based his teachings on the Torah (aka the Law of Moses). If he then told the Corinthians that they had to reject the Torah in order to be saved, he would be telling them to reject all of his prior teachings, including the very letter in which this statement was written. (The fact of Paul basing all of his teaching on the Torah also refutes the idea that the Torah is only for the physical descendants of Jacob.)

For this is the covenant that I will make with the house of Israel after those days, declares the LORD: I will put my law within them, and I will write it on their hearts. And I will be their God, and they shall be my people.
(Jeremiah 31:33)

Without God’s Law, there is no New Covenant, for one of its central promises is the writing of the Law on the hearts of God’s people rather than on stone. The content of the Law doesn’t change from one covenant to the other, but only the medium on which it is written.

So what did Paul mean?

…our sufficiency is from God, who has made us sufficient to be ministers of a new covenant…

…not of the letter but of the Spirit.

God has not commissioned us to carry only the news of the coming Kingdom, but also its fullest meaning, its wonder, and the hope that it carries with it to transform us into new creatures able to serve God with our whole beings. We need to understand the Scriptures and God’s Law in such a way that we are able to apply it in new circumstances that aren’t addressed by the letter without creating unintended burdens as the Pharisees have done.

It’s not enough to tell people that Jesus died for their sins without also giving them reason to hope that this means something real. We must allow God to soften our hearts into suitable media for his Law so that we are able to help others do the same. We have not been commissioned to teach men to obey, obey, obey, but to teach them to become sons of God who love him and desire more than anything to live as Yeshua lived.

For the letter kills, but the Spirit gives life.

If we only teach men do this and don’t do that, we aren’t doing them any favors. We’re just setting them up for a lifetime of stressing over rules. Striving always to live between the lines is like treading water. Sure, you’ll avoid drowning for awhile, but you’ll never reach the shore either. Eventually you’re going to tire and sink despite your best efforts.

Yes, God’s Law contains rules, and they’re important, but the rules can’t save anyone’s soul from eternal damnation. Our goal shouldn’t be to mark off all the boxes on a checklist, but to become the kinds of people who no longer need the checklist, to have God’s Law written on our hearts instead of only in our memories.

Now if the ministry of death, carved in letters on stone, came with such glory that the Israelites could not gaze at Moses’ face because of its glory, which was being brought to an end…

God’s Law is a great thing no matter what it’s written on, but the glory of the written law was always intended to be temporary. Not the law itself, but the necessity of it being written.

…will not the ministry of the Spirit have even more glory? For if there was glory in the ministry of condemnation, the ministry of righteousness must far exceed it in glory. Indeed, in this case, what once had glory has come to have no glory at all, because of the glory that surpasses it. For if what was being brought to an end came with glory, much more will what is permanent have glory.

In truth, there is no conflict between the letter and the spirit of the Law. They speak in unison. The conflict comes when we attempt to live by the letter without the spirit. Then we are in conflict with ourselves because we are holding ourselves to an impossible standard. No one, except Yeshua, has ever been able to live out the letter of the Law perfectly, and he only did so because he always lived by the Spirit.

The Spirit has no existence apart from the Law because the Law is a reflection of God’s own character. Yet the Law is empty without the Spirit, a body with no life in it.

The eternal state to which we aspire and to which God has ordained us is that of having his Law written in our hearts, so that it is no longer necessary for anyone to study and memorize it in the form of words and symbols. When we live in the Spirit, we keep God’s Law naturally and inevitably because it has become who we are. We will live in purity of knowledge, of understanding, and–most glorious of all–of relationship with our Savior.

Moses said that if we keep God’s Law, we will live by it. The letter alone kills, but Yeshua took the eternal penalty of our disobedience on himself, so that the Spirit can write the letter on our hearts, and we can live to the fullest, as God intended us to live.

One Reply to “The Letter Kills, but the Spirit Gives Life… What Did Paul Mean?”