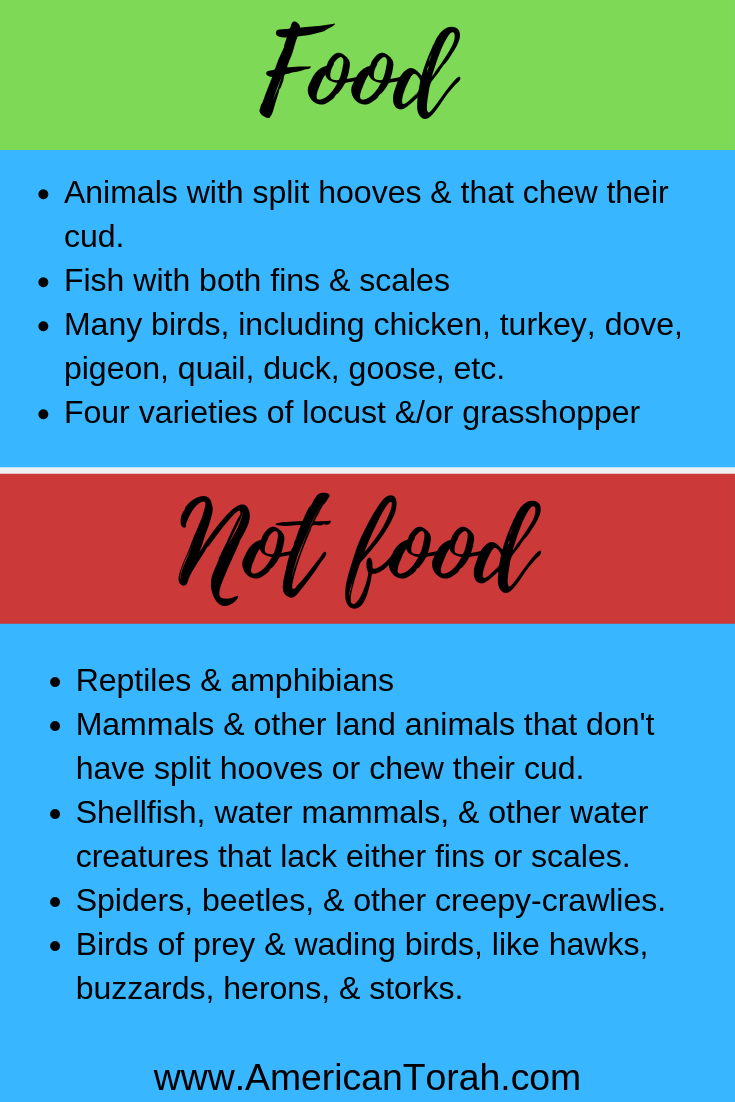 A couple of weeks ago, I wrote about Peter’s vision of the sheet with the unclean animals and showed how it was not about animals and food, but about people and the Kingdom of God.

There are other arguments and New Testament passages that people frequently quote when they attempt to disprove Yeshua’s words in Matthew 5:17-19, but before I address some of those, I probably ought to define the topic.

What does clean and unclean mean?

God’s rules aren’t arbitrary. There is always a reason for them, and that reason is always for our ultimate good. What makes an animal unclean is still a difficult question to answer, though, because the Bible doesn’t spell it out.

About the only thing we can be sure of is that “unclean” (tamei) doesn’t mean soiled or sinful. Uncleanness refers to a spiritual impurity, and is most often associated with death or a loss of life-force: blood, disease, corpses, graves, and bodily discharges.

Nothing in the Bible says “This is what makes an animal unclean,” but it does list some unclean animals and describe characteristics of others.

Leviticus 11 lists the basic rules of what animals God doesn’t want us to eat.

That leaves most ruminants, most fish, and many birds as suitable material for stew, salad, or stir-fry, but reptiles, amphibians, and shellfish are not allowed.

There are six common objections to a Christian or Messianic Jew to keeping kosher:

1.“Those rules were just because they didn’t have refrigeration. Now we know about tape worms and trichinosis and we keep everything frozen or at least cold before we cook it.”
Beef spoils if left unrefrigerated for too long, and chicken is notoriously dangerous. Yet both are kosher. The rules for clean and unclean animals have nothing to do with safety or refrigeration.

2. “Jesus made all foods clean. Jesus died so we don’t have to obey those laws anymore.”
Actually, Jesus never said anything of the sort. When debating the Pharisees about whether or not it is acceptable to eat food with unwashed hands when that food would otherwise be perfectly kosher, he told them that they were so concerned about their own traditions that they were ignoring God’s actual laws.His central point was this: What difference does it make if a man eats with dirty hands (or eats pork or lobster!) if he is a murderer, a liar, or an adulterer? If you put something into your mouth, your body eventually purges it. If you put something into your heart, however, there is no automatic, natural process to remove it.Jesus didn’t die so you could eat bacon. He died so you could have eternal life in spite of eating bacon.

3. “That was only for the Dispensation of Law. God told Noah he could eat any animal. That changed when God gave the law at Mt. Sinai, then it changed again when Jesus rose from the grave. Now we are in the Dispensation of Grace and can ignore the Law of Moses.”
Moses wrote in Deuteronomy 12:20 that the Israelites could eat whatever meat they wanted, but just 2 chapters later he repeated the list of things that God didn’t want them to eat.Sometimes one passage, when removed from the context of the whole Bible, appears to contradict one or another passage. That’s an illusion caused by our preconceptions and inability (refusal?) to consider those same passages from a more holistic perspective that harmonizes all of Scripture as a unified whole.
Everyone reads the Bible through a lens that colors their interpretations. The problem with most people is that they don’t know it, and act as if their vision is crystal clear with no possibility of tint or distortion. Humility is a rare commodity.

When you read about Noah after the Flood or Peter and Paul after the resurrection, consider–as an intellectual exercise if nothing else–reading those stories as if you believed that not a single letter could ever be removed from God’s Law. Do some of the words have alternate meanings (they all do) that work in the new context? Are you able to understand those passages in that light? If so, then it’s just possible that it is the correct light.

4. “Those are ceremonial laws. They don’t apply to us anymore. Only the moral laws are still in effect.”
I have never yet seen a reasonable defense of such a distinction in the Law. There is no civil vs ceremonial vs criminal or any such division in Scripture. It’s an invention of man. To the contrary, God said, “Do not take anything away from my laws nor add anything to them.” On one side are hazy conjectures and complicated theories. On the other side are several very clear, unambiguous statements from God. I’ll go with the latter.

5. “All of the Law of Moses was abolished. It was entirely replaced with a new set of morals defined by Jesus and fleshed out by Paul: Love God with everything you’ve got, and love your neighbor as yourself.”
When Jesus was asked what is the greatest commandment, he quoted the Torah, and he said that all of the rest of God’s words hang on just two commandments. He didn’t say that the rest of Torah was no longer relevant. He didn’t add or subtract anything at all from the Torah. He didn’t even say anything new, although it might have been new to the Pharisees with their burdensome traditions:
Matthew 22:37-40: And he said to him, “You shall love the Lord your God with all your heart and with all your soul and with all your mind. (38) This is the great and first commandment. (39) And a second is like it: You shall love your neighbor as yourself. (40) On these two commandments depend all the Law and the Prophets.”

Earlier I mentioned something else Yeshua said about the Law of Moses:
Matthew 5:17-19: Do not think that I have come to abolish the Law or the Prophets; I have not come to abolish them but to fulfill them. (18) For truly, I say to you, until heaven and earth pass away, not an iota, not a dot, will pass from the Law until all is accomplished. (19) Therefore whoever relaxes one of the least of these commandments and teaches others to do the same will be called least in the kingdom of heaven, but whoever does them and teaches them will be called great in the kingdom of heaven.

Note two things about that statement: 1) Whatever “fulfill” means here, it does not mean to destroy. 2) Nothing can be removed from the Law until heaven and earth pass away.

6. “The Law of Moses is still valid and still applies, but only to Jews. It was never intended to apply to gentile Christians.”As far as salvation is concerned, “There is neither Jew nor Greek, there is neither bond nor free, there is neither male nor female: for ye are all one in Christ Jesus.” However, the New Covenant was not promised to gentiles. It was promised only to the houses of Israel and Judah. See Jeremiah 31:31.Those of us, who were once Gentiles, have been grafted into the tree of Israel, not the other way around. There is only one body in the Messiah, one law, and one nation: Israel. If you want to be part of that body, then you have to become an Israelite, which means that, even if this objection were true, the Law must apply to all true believers in Yeshua. (Notice that I did NOT say you have to become Jewish.)

There are many strong-sounding arguments for ignoring God’s instructions regarding which animals are acceptable as food, and I don’t have time to hash them all out in this one article. Stick around, though. I’ll get to them eventually.

I assure you that every argument that relies on interpreting some Bible verse to mean the opposite of what Yeshua said in Matthew 5 falls apart when you start assuming that Yeshua knew what he was talking about.

There’s a lot of understandable confusion about what flying animals (includes more than just birds) are clean and unclean. The Hebrew words that describe the various birds in Leviticus 11 are obscure, and translators can’t agree on what flying animals are actually listed.

Here’s a chart showing how some popular translations render the list:

As you can see, there is unanimous agreement on some points and total chaos on others. We also classify flying creatures differently than the ancient Hebrews did. For example, we differentiate between flying mammals and birds. They didn’t. They made distinctions between various kinds of birds of prey that we can’t even decipher now.

Here is what we can say with relative certainty:

Based on those that are definitely not kosher, I think it’s safe to presume that these birds are also unclean, although I wouldn’t be dogmatic about it.

I’d Avoid Them, Just in Case

These birds seem to me like they probably belong in the list and some translators include them explicitly. Your call, of course.

Or at least they don’t seem to fit cleanly into any of the forbidden categories and they definitely aren’t listed explicitly. Some people still disagree about them, though.

If you are interested in an Hassidic Jewish perspective on kosher birds, check out this article from Chabad: What Are the Signs of a Kosher Bird?

P.S. WordPress is giving me a heck of a time keeping the formatting on this article the way I want it. It seems like every time I edit something, WordPress messes up all my formatting.