Curtains, planks, loops, staves, horns, crowns, sockets, skins, hair, linen, gold, silver, bronze, red, blue, purple, white, cherubim, pomegranates, height, width, length, cubits, hands, two, three, four, five, six, ten, eleven, twelve, twenty, fifty… I understand why some instructions on the construction of the Tabernacle were necessary, but why such detail? And why do we need to know about it 3500 years later? Why wasn’t all of this recorded in a separate manual just for the craftsmen?

God said that the Torah is not difficult to understand or even to follow, and it’s not, at least not on the surface. It says to make a box of certain dimensions out of a certain wood, overlay it with gold, put certain decorations on it, and put certain items in it.

Simple to do. Not so simple to understand why. There are some things that we aren’t meant to know or that we are incapable of understanding, but I don’t think that’s the entire story here. The rabbis have many traditions about why things were done one way and not another, and some of those traditions might even be right. The book of Ezekiel also hints that the ancient Israelites should have been able to derive moral truths from these technical instructions. (Ezekiel 43:10)

There are actually three tabernacles, and the wilderness mishkan is the middle one acting as a sort of intersection or focus point for the other two. The first tabernacle is of Heaven (Hebrews 8:2). Yeshua is the high priest there, and it is a temple for all Creation (Hebrews 9:11). It is the highest and most real of the three. The second tabernacle is that of Moses (Hebrews 8:4), as already mentioned. Aaron is its high priest, and it is a temple for a nation. It is an earthly copy of the heavenly reality. The third tabernacle is every person, and, as the mediator between the body and the Creator, you are its high priest, and the Holy Spirit is the presence of God above the Ark. (1 Corinthians 3:16) 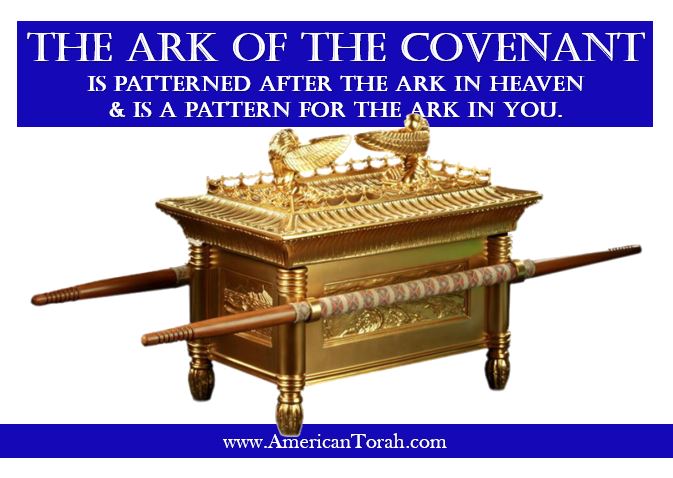 The Ark of the Covenant was made of only two elements, wood and gold. It contained a golden* jar of manna, Aaron’s staff, and the stone tablets of the Law. It had a cover, made of pure gold and adorned with golden cherubim.

The wood, which formed the core of the Ark, symbolizes two things: a heart of flesh and the individuality of each person.

A heart of flesh instead of stone indicates that we are to be soft-hearted to allow God to work in us. His Spirit cannot commune effectively with a stone, but works to transform our hard hearts so that we can have a more perfect relationship with God.

Gold represents purity in righteousness, and the Ark was covered with it inside and out. This means that we should strive to conform our hearts to his standards of perfect righteousness, not only through our outward behaviors, but also through the internalization of his Word.

Thy word have I hid in mine heart, that I might not sin against thee.
Psalm 119:11

If this is so, why wasn’t the whole Ark made of pure gold?

The Ark is a pattern for everyone, and not just a single person. God wants to build his kingdom, his nation, through us, and you cannot build a nation out of a million identical units. An object made of metal is uniform throughout. It has the same density and consistency on the surface as it has a centimeter or an inch deep. Wood, on the other hand, is infinitely variable. If you analyzed every square inch of wood that has ever been grown, you will never find two of them the same.

“And they shall teach no more every man his neighbour, and every man his brother, saying, Know the LORD: for they shall all know me, from the least of them unto the greatest of them, saith the LORD.”
(Jeremiah 31:34, Hebrews 8:11)

Aaron’s staff represents the life-bringing rule of the true High Priest, Yeshua of Nazareth. When we submit to his yoke, we find freedom and purpose. When we obey his direction, we find life.

The jar of manna represents our faith in God’s provision. The jar is pure gold, because it is our faith in him which makes us perfect in his eyes.

Genesis 17:1 gives another example of these three elements in the life of a believer: “And when Abram was ninety years old and nine, the LORD appeared to Abram, and said unto him, I am the Almighty God; walk before me, and be thou perfect.” “I am the Almighty God” echoes the first commandment on the stone tablets; Abraham walks before God who is his shepherd and high priest symbolized by Aaron’s staff; and he was considered perfectly righteous because of his faith in God symbolized by the golden jar of manna.

The atonement cover on the Ark is Yeshua, our Messiah and King. He is wholly sinless as solid gold. He covers us with his blood, with his perfect life, and with his authority. Our prayers rise from our heart through him, between the wings of the Cherubim, to the Father in Heaven. So it is that no man comes to the Father except through him, and so it is that our prayers will be hindered if we do not forgive and love according to his example.

There is one true Tabernacle in Heaven, and Yeshua presides there as High Priest. We are to pattern our lives after it, and our hearts after the Ark within. The earthly tabernacle was given as a pattern for us to follow until the final veil is removed and we might see the reality with our own eyes.

For now we look forward to it through the lens of the tabernacle as described in the Torah and the Prophets.

*Only the Septuagint says this jar is made of gold, but it is confirmed by Hebrews 9:4.