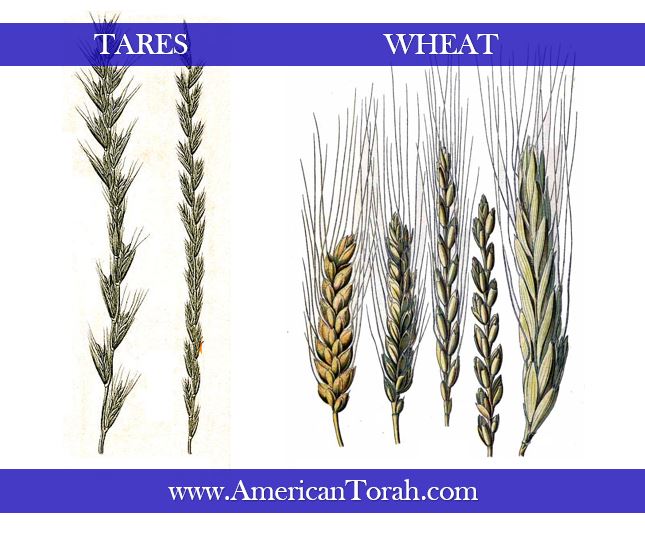 The kingdom of heaven may be compared to a man who sowed good seed in his field, but while his men were sleeping, his enemy came and sowed [tares] among the wheat and went away. So when the plants came up and bore grain, then the [tares] appeared also.

And the servants of the master of the house came and said to him, “Master, did you not sow good seed in your field? How then does it have [tares]?”

He said to them, “An enemy has done this.”

So the servants said to him, “Then do you want us to go and gather them?”

But he said, “No, lest in gathering the [tares] you root up the wheat along with them. Let both grow together until the harvest, and at harvest time I will tell the reapers, ‘Gather the [tares] first and bind them in bundles to be burned, but gather the wheat into my barn.'”

When I was growing up, I heard this parable taught many times in Sunday School. The point made most often was this: Watch out for those tares. They look like real Christians, but that’s only a disguise on the outside. God knows what’s really in their hearts, and at the judgment, he will be able to tell them apart. The wheat will go to heaven, while the tares will go to hell. So don’t be like the tares. Be a real Christian, all the way through.

That’s good advice and all true as far as it goes, but it’s not complete. What about the man’s instructions to his servants?

Don’t pull out the tares, lest in doing so, you root up the wheat along with them.

I quoted the full parable in Matthew 13 at the top of this article from the English Standard Version, but I think this is one of those few cases where the ESV is clearly wrong. Certainly a tare is a kind of weed, but it’s a specific kind of weed, and that fact is important to the parable. I changed that word in the quote to make sure that point isn’t lost.

Fausset’s Bible Dictionary says this about the tare:

Darnel; at first impossible to distinguish from wheat or barley, until the wheat’s ear is developed, when the thin fruitless ear of the darnel is detected. Its root too so intertwines with that of the wheat that the farmer cannot separate them, without plucking up both, “till the time of harvest.” The seed is like wheat, but smaller and black, and when mixed with wheat flour causes dizziness, intoxication, and paralysis; Lolium temulentum, “bearded darnel”, the only deleterious grain among all the numerous grasses. (Fausset’s Bible Dictionary)

The landowner in Yeshua’s parable didn’t want his servants to weed out the tares because of three distinctive features:

Besides the Sunday School lesson I referenced above, what can we learn from this?

There are three kinds of believers that can be described as tares:

Did you notice that I worded each of those to influence your opinion against the people being described?

Christians (and Jews and every other religious group…maybe I should just say “people”) have a long history of attacking their own over seemingly minor disagreements. We let our emotional attachments to our own opinions trump reason, knowledge, and love, and in the end, all we accomplish is destruction. We are like the servants in Yeshua’s parable, but instead of asking him what we should do, we take it upon ourselves to pull up what we perceive to be tares.

Let me give you some examples of the three types I listed above.

A deacon at your church is respected and liked by the congregation. He has served honorably for many years. But recently you saw him exchange envelopes with a strange man in a restaurant. Was it a drug deal? A blackmail payoff?

This man looks like wheat to everyone else, but now you’ve seen something that makes you wonder if he might be a tare. Should you expose him?

What has he actually done? Did you see drugs, money, photos…anything actually bad at all? In reality, all you saw was two men exchanging envelopes. It could be a contract, landscape design, or project specs. You don’t really know anything at all.

God’s Law doesn’t authorize us to snoop in other people’s private lives. (See “So Shall You Purge the Evil from Your Midst“.) If someone is flaunting their sin or if it becomes public knowledge somehow, that’s another story, but if someone has sin in their closet that nobody knows about except him and God, then leave it be. You don’t know what unwarranted damage you might cause by meddling where you don’t belong.

Reasonable and well-meaning people will have different opinions on what God’s instructions mean. That’s normal. As Paul wrote in 1 Corinthians 13:12, “For now we see through a glass, darkly; but then face to face: now I know in part; but then shall I know even as also I am known.”

One person believes they should never eat meat sacrificed to idols, while someone else believes it’s okay as long as you don’t participate in the ritual itself. They both might feel very strongly that they are right and that the other person is engaging in legalism or idolatry. They both love God with all their hearts and do all they can to help their neighbors, but based on this one issue, they are ready to excommunicate each other.

We all believe things that other people don’t, even things that seem to us to have clear and incontrovertible support from Scripture. Investigate why others believe the way they do, and you will almost certainly find that they have good reasons, and aren’t in rebellion against God. When we find ourselves on the opposite side of an issue from knowledgable and godly people, we need to step back and acknowledge that we might be wrong. That doesn’t mean you have to change your mind. It only means that you need to extend a little grace to your brothers and sisters in Yeshua when the Bible isn’t quite as black and white as we would like it to be.

Infant baptism or only adults? Sprinkling or immersion? Trinitarianism or unitarianism? Yeshua or Yahusha? Cessationism or continuationism? Young earth creationism or theistic evolution? There are countless more examples of controversies within Christendom that have no real impact on how we look or behave.

If you keep the Sabbath and don’t bow down to any graven images, does it really matter if you believe that God does or doesn’t have semi-autonomous parts? Nope.

If you don’t murder or steal, what practical difference does it make if you call the Messiah Jesus, Yeshua, or Yahusha? Zilch.

Does believing that the earth is 6000 years old or 5 billion years old matter if you honor your parents and respect your neighbor’s property? Not a bit.

Does reading the Bible in English make you any more or less a Christian than reading it in Latin? Christ didn’t read the Scriptures in either one, so I can’t see how it could.

These are matters of vain philosophy and imagination. They are myths and just-so story telling. Yet so-called devout Christians have killed each other over these issues because they refused to heed the parable of the wheat and the tares. In attempting to uproot what they believed was a tare, they caused hatred and division in the Body of Messiah. They destroyed lives, both innocent and guilty, and they continue to do so today by accusing their brothers and attacking one another over relatively trivial matters.

The Bible hints at many things that are not explained in depth and never addresses many others. For example, there are a number of instances in the Old Testament in which an angel is referred to as God. There are seven spirits of God. In mystical language, John said that Yeshua is God, and then there is the Holy Spirit, but the Scriptures also say that God is one. So is God one, three, or seven? We are created in God’s image, yet God doesn’t have a body. We have a body, so how can we be made in the image of a God that doesn’t? I don’t know the answers to these questions, and the plain fact is that neither does anyone else. God is God, and he is beyond human comprehension. He has not chosen to give us a detailed description of himself or his anatomy, and if he had, we shouldn’t expect to understand it anymore than an amoeba would understand ours.

When we insist, in the guise of stamping out heresy, on attacking one another over questions to which nobody could possibly know the answers or that don’t have any practical application, then we are like hamfisted workers, carelessly tearing out good wheat with bad tares because we think we know better than our master.

In our zeal to purify the Body of Messiah, we have tainted it by filling our hearts with hatred.

There are things that are clear in Scripture. In the context of the parable, we might say that thistles are easy to tell from wheat. Someone with spiritual eyes to see and hands to touch will never confuse the two. If you can uproot what is clearly evil without harming what appears to be good, do so. This is also part of our master’s instructions.

Open homosexuality, murder, theft, idolatry… Only those who are are in active rebellion against God and his Law will defend them. These things mark the truly reprobate from the righteous, and we are commanded by God to remove them from our communities to prevent their spread. We aren’t authorized to go looking for them in people’s closets, but if they are revealed, then we have to deal with them.

Speculations about esoteric matters that have not been revealed to us can be interesting, even enlightening at times, but are more often simply a waste of time. As long as they don’t lead people to reject what has been revealed or to behave contrary to God’s commands, they aren’t worth fighting over and driving off good people.

In the end, even every stalk of grass will be known by its fruit, and sometimes we just need to let them all grow and leave it to the Master to sort them out.

The master wanted his servants to wait for the harvest because there are things they don’t know. They can’t see the roots of those tares. They can’t see the DNA that truly defines one from the other. There’s a good chance they can’t even tell the difference between the wheat and the tares by looking directly at them.

Those things that God has not chosen to reveal to us are his business, not ours.

3 Replies to “Tearing out the Tares”