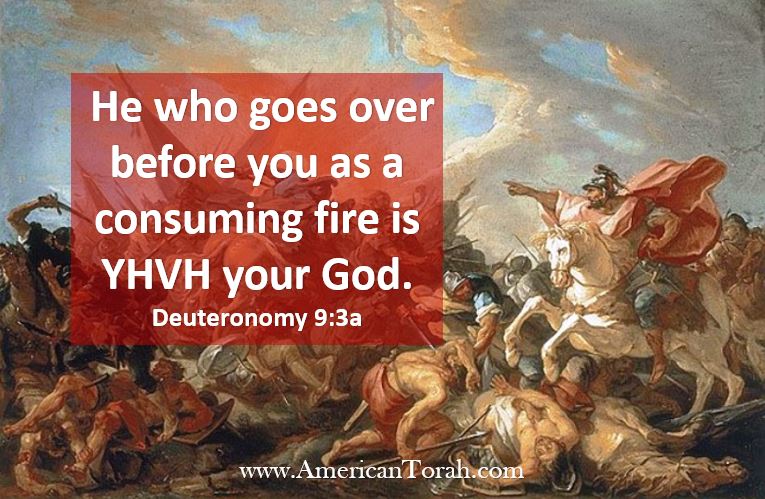 In Deuteronomy 9:1-6, Moses told the Hebrews that they were about to cross the Jordan to confront numerous, stronger enemies. The people who lived in Canaan in that day were bigger, stronger, more technologically advanced, and better trained than Israel. Despite their massive disadvantage, Moses said not to fear, because God would precede them into the land and subdue their enemies before they ever met them in battle.

Hear, O Israel: you are to cross over the Jordan today, to go in to dispossess nations greater and mightier than you, cities great and fortified up to heaven, a people great and tall, the sons of the Anakim, whom you know, and of whom you have heard it said, ‘Who can stand before the sons of Anak?’

Know therefore today that he who goes over before you as a consuming fire is the LORD your God. He will destroy them and subdue them before you. So you shall drive them out and make them perish quickly, as the LORD has promised you.

Know, therefore, that the LORD your God is not giving you this good land to possess because of your righteousness, for you are a stubborn people.
(Deuteronomy 9:1-6 ESV)

But they still had to fight the battles.

Notice the introductory phrase in verse 1: “Hear, O Israel.” In Hebrew this is “Shema Yisrael.” It’s the same phrase used to introduce the Ten Commandments in Deuteronomy 5:1 and the passage in Deuteronomy 6:4-5 commonly known by the single Hebrew word Shema.

Yeshua quoted these verses when he was asked what was the greatest commandment of all (Mark 12:28-30), and they are immediately followed by instructions for Israel to remember the commandments, to teach them to their children, and not to forget them after God had made them secure in the Promised Land.

When Moses used those same two words, shema Yisrael, in Deuteronomy 9:1, the people would have immediately recalled the Ten Commandments and the Greatest Commandment and connected them to what he said next.

They were about to enter the Land, and Moses repeated God’s promises to deliver it into their hands, so there was definitely a connection to the Commandments and the reminder not to forget them when the conquest was complete, but the connection to the Shema itself is even deeper.

Hear, O Israel – The word shema means more than just “listen up” or “pay attention”. It means to hear and obey. Shema Yisrael is a call to action, much like the blast of a shofar: “Listen to what I have to say, internalize it, and do it.”

Moses said that they were going to cross over the Jordan “today”. Crossing into enemy territory was the next major event on Israel’s calendar, and it was time to start moving.

YHVH, our God – Let there be no confusion: YHVH is our God and we have none other. He is our ultimate authority, our supreme commander. His commandments are more than legal codes, they are the foundation of our existence. What he says, we will do.

When God told Israel to cross the Jordan and displace the Anakim and other nations who lived in Canaan, he meant it. There were no other options available for Israel. They must either cross and conquer or die in the wilderness like their fathers.

YHVH is one – God is unified in purpose. He is not duplicitous or double-minded. He doesn’t promise one thing and deliver something else. Much Christian theology says that God gave the Jews commandments that he knew were impossible to keep and promises that he never intended to deliver, but this is a horrible lie. What an evil and capricious god that would be! No, God is One. If he commands us to do something and tells us it’s not too hard, then we are fully capable of doing it. “I can do all things through Him who strengthens me.” (Philippians 4:13)

God gave the Hebrews a task that looked impossible from man’s limited perspective, but they had also seen the destruction of Pharaoh’s chariots and the annihilation of the Midianites. God is indeed a consuming fire, and nothing can stand against his decrees.

You shall love YHVH your God – Moses, Yeshua, and John taught us that to love God is to believe his promises and to keep his commandments. If a servant loves his master, he obeys him. If a master loves his servant, he does what is right for the servant, even to the point of sacrificing himself as Yeshua did for us.

God told Israel that he loved them and would fight for them. If Israel loved God in return, then they would believe his promises and obey his orders, even to the point of charging into battle on foot against armored giants and iron chariots. Their love for him waned at times, so not every battle was won, but when they obeyed, God ensured their victory every time.

With all your heart – A true love of God changes our innermost being. We must allow him to work in our hearts, to remove our doubts, fears, pride, and conflicts. He will not accept second place, and he will not share our affections with any other god.

Israel was required to memorize God’s words, to meditate on them, to hide them in their hearts, and to teach their children to do likewise. After they crossed the Jordan, they were to destroy every idol and every pagan holy place they found in Canaan. They were forbidden to learn the ways of the heathens, to “re-purpose” them in God’s name. It didn’t matter how meaningful or touching some ceremony or statue might be. Destroy it, because if God is to be in your heart, there is no room for his enemies.

With all your soul – The Hebrew word for “soul” here doesn’t refer to the spirit, but to the whole of one’s being: the body, breath, energy, spirit, and life-force that makes a person human.

As Israel faced their foes in the Promised Land, they were to hold nothing back. Their very existence depended on taking the land from the Canaanites. God doesn’t ask us for one day per week, a few dollars, and a good deed now and again. No, he wants everything. Every step, every thought, every breath belongs to him.

With all your might – Showing up isn’t enough. Crossing the Jordan isn’t enough. When God tells you to go, you have to go strong.

God said that he would fight on behalf of Israel, but that didn’t give them an excuse to sit on their hands and watch. He expected them to show up on the day of battle with armor on and weapons in hand, ready to fight for their lives, families, and future. “God helps those who help themselves” might not be in the Bible, but it’s true none-the-less.

When Moses prefixed God’s marching orders with the words, “Shema Yisrael“, a chill would have swept through the gathered multitude. “Today, you will cross the Jordan to dispossess peoples greater and stronger than you. Now is the time to stand for God. Now is the time to advance. Now is the day of our Salvation in Adonai!”

There are no excuses for inaction in God’s Kingdom. Whatever task he has set for you–and he has set a task for you!–God has made you capable of fulfilling it. No emotional baggage or physical infirmity is a handicap to God. When he sends you across the Jordan, your job isn’t to say, “But…but…but…” Your job is to draw your weapon and walk through the parted waters to face God’s enemies on the other side.

Whoever or whatever your Canaanites might be, show up humbly and in obedience to God, ready to fight with all of your heart, soul, and might, and God will subdue his enemies before you.