Leviticus 13-14, in the Torah portions called Tazria and Metsora, describes the process for diagnosing, treating, and cleansing of a disease called tzaraat. (Most English Bibles translate this word as “leprosy”, but that’s incorrect since the Biblical condition doesn’t really align with what we know of as leprosy or Hansen’s Disease.)

Levitics 14:2 says “This shall be the law of the leprous person for the day of his cleansing. He shall be brought to the priest,” and then gives instructions to the priest for completing the cleansing of the leper. When the leper’s skin condition has cleared up, he is to take an offering to the priest who will perform the necessary rituals to make him ritually clean again.

This is the passage that Yeshua cited after he healed a leper in Luke 5:12-14.

While he was in one of the cities, there came a man full of leprosy. And when he saw Jesus, he fell on his face and begged him, “Lord, if you will, you can make me clean.” And Jesus stretched out his hand and touched him, saying, “I will; be clean.” And immediately the leprosy left him. And he charged him to tell no one, but “go and show yourself to the priest, and make an offering for your cleansing, as Moses commanded, for a proof to them.”
(Luke 5:12-14)

Notice that Yeshua did not say “Be healed”, but “Be clean”. Having declared the man clean, Yeshua told him to go to the priest as required by the Law, except that the Law says the man goes to the priest after he has been healed of the disease in order to be declared clean so that he can rejoin the congregation of Israel.

But if Yeshua had already cleansed the man of tzaraat, why would he need to go to the priest?

Jewish tradition says that tzaraat is caused by lashon hara or evil speech, especially against a person in divinely appointed authority, such as a priest or prophet. If the tradition is correct, tzaraat is the physical manifestation of a spiritual condition. “What comes out of the mouth proceeds from the heart.” (Matthew 15:18)

It seems to me that, if the disease in the skin is caused by a disease of the heart, then the heart must be healed before the skin can be made whole again. When Yeshua said “Be clean”, he wasn’t referring to the tzaraat, because, even as Yeshua himself confirmed, only a Levitical priest can declare a leper clean. Yeshua was referring to the man’s heart. In effect, he said “Be cleansed of your bitterness, resentment, and every other kind of hatred that causes one man to speak ill of another.”

Yeshua did not say “Be healed” because he was addressing the man’s spiritual condition, not his skin condition. Once the man’s heart was made whole, the tzaraat was cut off from its roots and his skin was healed as well. His physical healing was a happy side effect.

No one acts for long in opposition to who they really are. If you let a person talk and walk long enough, he’ll eventually show his true colors. 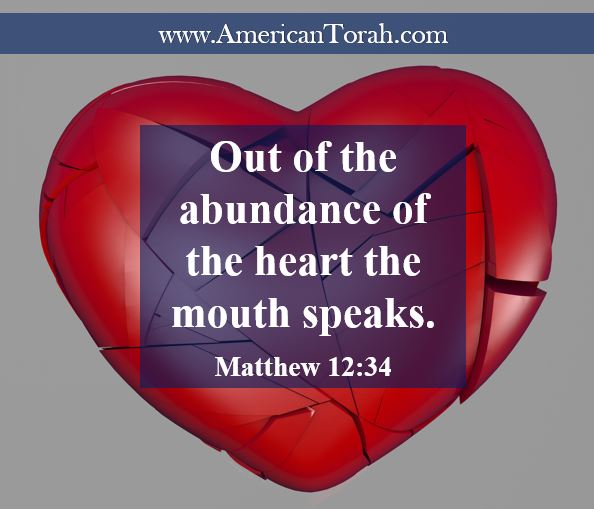 When Yeshua looks at us, he never sees only our outward appearance or even the things we do and say. He sees straight into our hearts. That’s how we need to look at people. We need to see with His eyes.

We need to see that when people say ugly things, it’s because there’s something ugly on the inside that needs to be healed. That doesn’t necessarily mean they’re bad people. It could mean they’re hurting, sick at heart and longing to be told, “Be clean.”

It usually takes time and spiritual discernment to tell which. “The sins of some people are conspicuous, going before them to judgment, but the sins of others appear later.” (1 Timothy 5:24) Don’t be hasty to judge a person’s heart. Let your default position be in understanding and kindness.

3 Replies to “Out of the Poverty of the Heart…”