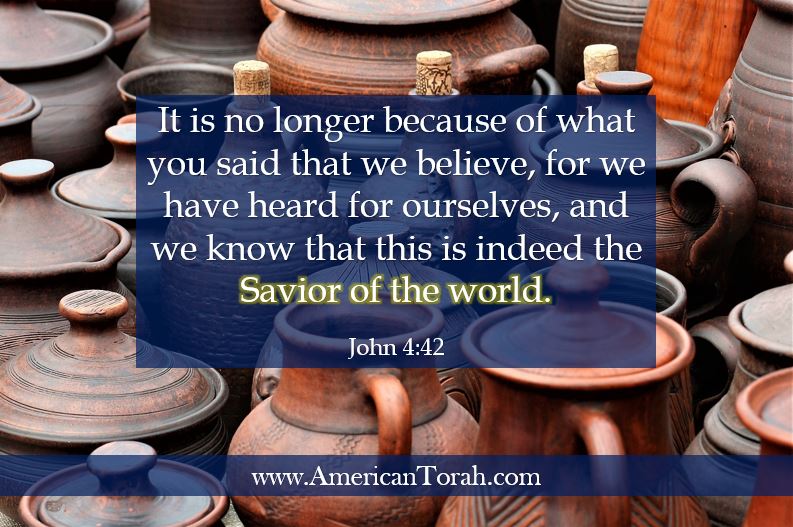 And on the first day of Unleavened Bread, when they sacrificed the Passover lamb, his disciples said to him, “Where will you have us go and prepare for you to eat the Passover?” And he sent two of his disciples and said to them, “Go into the city, and a man carrying a jar of water will meet you. Follow him, and wherever he enters, say to the master of the house, ‘The Teacher says, Where is my guest room, where I may eat the Passover with my disciples?’ And he will show you a large upper room furnished and ready; there prepare for us.” And the disciples set out and went to the city and found it just as he had told them, and they prepared the Passover.
(Mark 14:12-16 ESV. See also Matthew 26:17-19 and Luke 22:7-13.)

This passage reads almost like something from a spy novel with undercover agents and secret codes. What was going on? Who was this man they met? And who was the master of the house who was apparently expecting Yeshua and his disciples?

I don’t have any strong feelings against either of those ideas–they both have merit–but I think there is something more going on. Passover involves washing, cooking, and baking, so surely there was more than one man in Jerusalem porting water in preparation for the coming festivities. There must have been thousands! Why did Yeshua single out that characteristic and not another, like the color of his turban or the style of his cloak?

Although these ideas are plausible, and might even be true, I’m going to give you two additional, interconnected, more significant ideas.

In Mark 14, an unnamed servant, who carries a pitcher of water, leads two of the disciples to the master’s house, where they will prepare to share the Passover with their friends.

Why a pitcher of water? Who was the man and how did he know they were coming?

Whenever you see something inexplicably odd in Scripture, it’s a sign that you should stop and take a closer look. I think a good place to start looking is in other places where we see pitchers of water and unnamed servants.

There are others, of course, but I think this sampling is sufficient to learn something significant.

An unnamed servant is often a metaphor of the Holy Spirit, for example in Genesis 24 when Abraham sends his servant to find a bride for Isaac. How does the servant know which of the many young women of the town is the right one to bring back for Isaac? She is the one who is carrying a pitcher of water from which she will give a drink to him and all of his camels. Abraham is God, the Father, while the servant is the Holy Spirit, Isaac is the Son, and Rebekah is Israel, the Messiah’s bride.

So the servant in Mark 14 may be an image of the Holy Spirit, but what does the pitcher of water mean?

Bear with me for a bit.

By calling the servant–and the whole situation–a metaphor, I don’t mean to say that the events of Genesis 24 and Mark 14 didn’t actually happen as described. I mean that real events are often orchestrated by God to be prophetic metaphors of future events or of greater truths. In Mark, the man leads the two disciples to the Master’s house. Who is the Master? As in the Genesis story, He is God, the Father, and the house is the Kingdom of Heaven. No one can know the way to the Father unless the Spirit opens his eyes.

But having one’s eyes opened to the way is not enough. Yeshua said that he is the door and no one comes to the Father except through him. So where is Yeshua in this story? He is there at the beginning, in the middle, and at the end.

Bear with me a while longer, if you will.

Water is often a metaphor of spirit. Depending on the context, it can be the Holy Spirit or the spirit of a person or even of a people.

The water in this story is held in a clay pitcher.

Earthenware vessels take a prominent role in the sacrificial system. If a sin offering (Hebrew: khatat, which literally means just “sin”) is boiled in a clay pot, the pot had to be broken afterward (Leviticus 6:28), much like Yeshua’s body was broken for us as he took our sin upon himself. The clay pot is his body, the sin offering is our sin, and the water is his spirit, which transforms the sin offering into an atonement for sin.

There is another transformation–and another earthenware vessel–described in the trial of the woman suspected of adultery in Numbers 5. The woman undergoes an elaborate ordeal in which curses against her are written on a scroll and washed off into a vessel containing sanctified water and dirt from the holy ground of the Tabernacle. She then drinks the mixture. If she is guilty, she’ll die of a wasting disease. If she is innocent, the curses are erased by the water and dirt from the pitcher, not just physically from the scroll, but also spiritually from her soul.

In this procedure, we are the accused woman and Yeshua is, again, the vessel. His life was poured out on the cross in order to “blot out the handwriting of ordinances that were against us” (Colossians 2:14). We too are clay vessels, and into us, God has poured “the light of the knowledge of the glory of God in the face of Jesus Christ”, as well as his very life and death so that we can, in turn, give his light to the world while standing firm beneath the hardships and persecutions that the world throws against us for the sake of our faith in Yeshua. (2 Corinthians 4)

In John 4, there is yet another woman and an earthenware vessel. Yeshua and his disciples encounter a Samaritan woman drawing water from a well–Why does that sound familiar?–and when she realizes that he is the prophesied Messiah, she abandons her pitcher there at the well. She exchanges her pitcher of mundane water that must be replenished daily in order to continue sustaining life for another, Yeshua, that gives eternal life and never runs out. She runs home to tell all of her friends and family about the man who gave her living water, and they all believe in him too.

What has all this to do with the Passover water-bearer? Here is the meaning:

As in the story of Rebekah, the unnamed servant (the Holy Spirit) has gone to the well in search of a bride for the Master’s son. At the well he finds Peter and John who are two witnesses standing in for the twelve disciples, as well as for the two houses of Israel. They are the Bride of Messiah.

The servant doesn’t speak to them directly or on his own behalf, but carries his water pitcher on his shoulder, lifting up Messiah Yeshua so that they are able to follow him through the throngs that fill the streets for the coming festivities to the Master’s house, to the Kingdom of Heaven and the wedding feast of the Lamb.

God’s graphic prophecies are multidimensional, and if you turn them to look at them from a slightly new angle, you can often see another layer.

The servant is also you and me.

We are the woman at the well who has abandoned her old, empty life at the feet our Messiah and exchanged it for another, full of eternal life in Him. Our task, our Great Commission, is to lift Yeshua up high, like she did, so that all those who are called can see him in us. The world must be able to watch us walk among the world’s billions and see the life and death of Yeshua in our every word and deed. Our walk must be righteous to match the innocence which has been imputed to us by his shed blood, so that those who are ready and seeking him will find him.

The worthy servant of God goes out into the world with the Spirit and the Word to guide the broken, the sorrowful, the meek, and the hungry to the freedom from sin and death that is only found in our Passover lamb, Yeshua.

So, go, and live worthy lives that “draw all men unto” Him (John 12:32) and “be ready in season and out of season” (2 Timothy 4:2) to tell others of the living water that has redeemed and animated us.