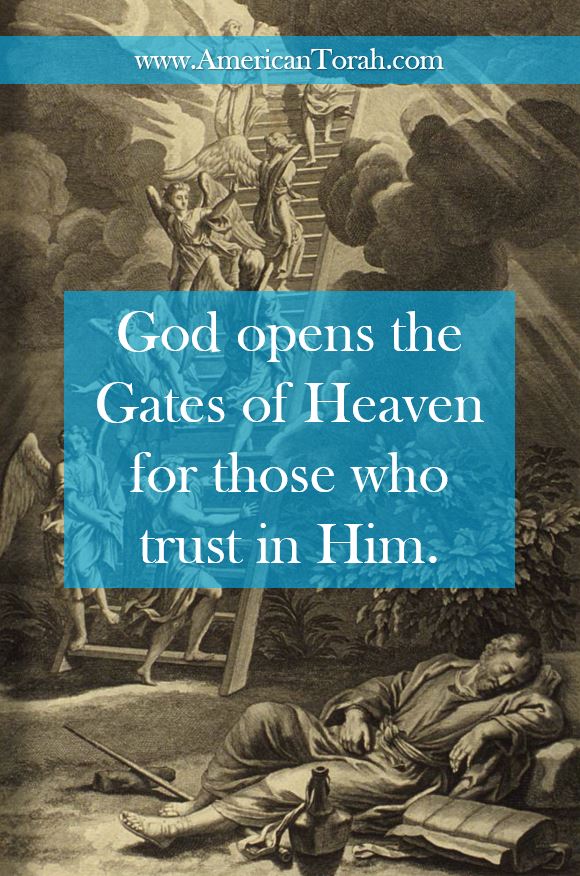 When Jacob was first setting out for Haran to find a wife and escape from Esau, he had a vision of heaven opening up and angels ascending and descending by way of a ladder. God said to him,

Behold, I am with you and will keep you wherever you go, and will bring you back to this land. For I will not leave you until I have done what I have promised you.
(Genesis 28:15)

“This is the House of God and the Gates of Heaven,” Jacob said, and set up a pillar to mark the place.

God promised to watch over Jacob while in exile and to bring him back to the Promised Land safely. He spent the next fourteen years in Laban’s employ and, during that time, he was tricked, betrayed, and cheated over and over. At some point he must have begun wondering what exactly God meant by his promise.

Yet Jacob prospered despite Laban’s constant attempts to cheat him. So much so that Laban’s sons accused him of cheating Laban instead of the other way around. When he had completed the seven years he had agreed to work in exchange for Rachel, he packed up his family and flocks while Laban was away and they headed for Canaan. Laban caught up with them on the way and tried to relcaim his daughters along with their children. If it were not for the intervention of God, Jacob might have lost everything again.

God fulfilled his promise to bring Jacob back from exile.

Over those many years of hard work, family struggles, and a couple of close calls, the angels that Jacob saw “ascending and descending” as he went into exile continued to come and go. They gates of heaven opened at the very beginning of Jacob’s journey and remained open until the end. During that time, the angels were kept busy arranging circumstances in Jacob’s favor, encouraging him, and turning defeat into victory and trials into gold.

Jacob’s life was pivotal in the history of the world. It was imperative to God’s plan that he marry Leah and Rachel and have twelve sons. This entire chapter of his life was both foundational and prophetic of the future of the people of Israel. Their repeated exiles from and returns to the land were all foreshadowed by Jacob’s, and God’s angels ensured it would all happen exactly as God intended no matter how confusing and frustrating it might have been for Jacob.

Many centuries later, Yeshua would meet a man named Nathanael and said of him, “Behold, an Israelite indeed, in whom there is no deceit!” (John 1:47) An Israelite without guile reminded him of the time that Jacob spent working for Laban in Haran and he added,

Truly, truly, I say to you, you will see heaven opened, and the angels of God ascending and descending on the Son of Man.
(John 1:51)

The life of Yeshua was an even greater historic pivot than Jacob’s. And, like Jacob, God had promised to keep Yeshua during his time on earth until all that God had promised him was fulfilled. Satan quoted Psalm 91:11-12 to Yeshua when he tempted him in the wilderness:

For he will command his angels concerning you to guard you in all your ways. On their hands they will bear you up, lest you strike your foot against a stone.

And he was right to apply this verse to Yeshua, but, as I’m sure he was aware, it didn’t apply in the plain, literal sense. God did watch over Yeshua to and sent his angels to keep him, but the purpose of God’s Providence wasn’t to give him a pain free life, but to ensure that his plan was carried out.

You have probably heard it said that if God puts you into hard times, then he will also see you through them, but this is only true if you understand “see you through them” from God’s perspective. He sees you through hard times so that you get to where he needs you to be. The place he needed Yeshua to be was on the cross. God will see you through to the end, but the end might not be where or what you might prefer.

Fortunately for all of us, Jacob’s labor in Laban’s pastures and Yeshua’s labor on the cross were not the end. Jacob returned to the Promised Land at the head of a new nation and Yeshua returned from the grave and ascended to Heaven at the head of a Kingdom unlike anything the world has ever seen.

God’s only requirement of both Jacob and Yeshua was sufficient faith to obey against all reason and comfort, to obey even unto death, but the return was a thousand fold and more.

All of the angelic forces of Heaven might not be focused on you and your life, but neither are they ignorant of you. God is watching you and keeping you. His angels do watch over you. Your life must contain suffering and hard labors because without them you would never grow into anything worthwhile, but for those whose trust in is God, all suffering works toward something much greater.

All that God requires of you is sufficient faith to obey against all reason and comfort, and for a great many people even today, that means even unto death.