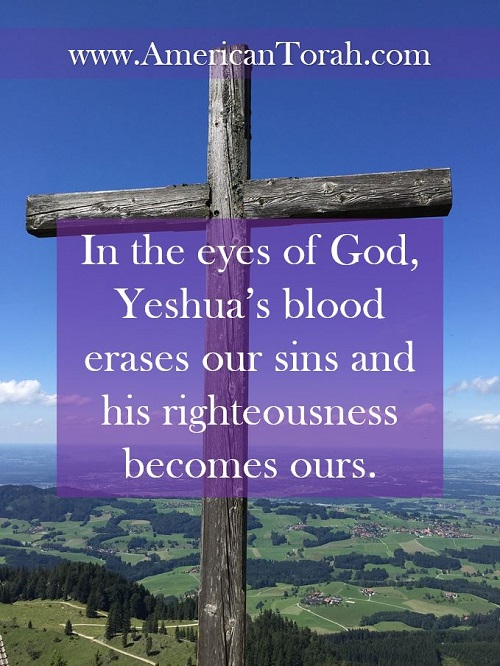 Someone on Twitter recently told me that he is still not sure why the Messiah needed to die. My reply (brief due to the limitations of Twitter) was something like this:

Something has to cover (atone) our sins before we can approach God. A precise understanding of how atonement works is probably beyond our comprehension, but I think of it like neutralizing a bad odor. God can’t stomach our stench, so he sent Yeshua whose blood covers and removes it. His good odor becomes ours in God’s nostrils, hence the repeated description of sacrifices as “a pleasing aroma” to God.

This interaction reminded me of another conversation I had with someone a long time ago, reproduced here:

Q: What purpose did the crucifixion and resurrection serve?

Among other things, the Crucifixion satisfied the requirement of the Law for the death of the sinner, and the Resurrection established Yeshua’s permanent mastery of death. The Law still requires death for certain offenses, but there is forgiveness apart from mere physical death. Yeshua’s crucifixion opened the door for grace at the final judgment and for eternal salvation.

Q: Did they change anything? If so, what, when, and for whom? Was the world a different place after the resurrection than before Christ’s death on the cross? In what way?

There was a change, but it was subtle (and dramatic at the same time, if that makes sense). Without Yeshua’s death and resurrection, nobody at any point in history, backwards or forwards, could ever be saved from eternal damnation or granted eternal life, but the method of salvation didn’t change after that event from what it was before. In other words, someone in 100 BC is saved the same way as someone in 100 AD: through faith in God’s mercy enabled by the blood of Yeshua. Salvation has always been available to anyone who asked and subjected themselves to God’s mercy. No one was ever saved by his own circumcision or obedience to Law, but by the grace of God in providing a substitutionary payment for the sins of all people who have ever lived.

Yeshua’s resurrection proved his innocence. He could not be condemned because he never violated a single point of the Law and so could not be held in the grave. Untainted blood acts as a sort of spiritual shield or mask that allows us to approach God (and vice versa) closer than we could as our natural, fallen selves. In the eyes of God, Yeshua’s blood erases our sins and his righteousness appears to the Father as our own if we willingly place ourselves beneath it. But since God exists outside of time and could look through that blood at Abraham and David as well as at you and I, this doesn’t really answer the question.

The world was a different place after Yeshua’s death and resurrection in three important ways.

First, our perspective changed. Abraham knew a redeemer must come and looked forward in faith to that day. We now know that the redeemer has already come, and we look back at that day in faith that his blood is sufficient to cover our sins. The ultimate fulfillment of redemption is yet to come, but the payment has been made in full. An earnest of delivery was given in the form of the Holy Spirit, and we now look forward to the reality.

Second, although God exists outside of time, our spirits do not. Before Yeshua, the Scriptures seem to indicate that the dead went to some place like the underworld common to most ancient mythologies: “Abraham’s Bosom” for the faithful and Hades for the unfaithful. They could speak and thirst and could sometimes even return to the land of the living. Yeshua changed something in that arrangement, although I won’t pretend to understand exactly what.

Third, Yeshua, who has become a man and the firstborn of the resurrection, can now operate as our high priest in the supreme tabernacle in Heaven. When we accept his kingship and covering of our souls, our obligation is transferred from the Law, which holds us in bondage as lawbreakers, to him, who sets us free by mercy. His priesthood is superior to that of Aaron’s and his forgiveness supersedes any condemnation we might have under the Law.

Q: Did He die only so that we wouldn’t have to go to Jerusalem every year and kill animals for God?

No. The sacrificing of animals never had anything to do with eternal salvation. They atoned for inadvertent or accidental sins. There has never been an animal sacrifice for deliberate sin. Having said that, I don’t know exactly what affect his death and resurrection has on animal sacrifices. Since they were never intended to save anyone’s soul and there is no altar on which to offer them anyway, it’s not something I’m going to worry about overmuch.

However, there are prophecies that appear to indicate there will be animal sacrifices offered up again on an altar in Jerusalem under Yeshua’s personal supervision. If that is a correct understanding, then his death could not possibly have negated all need or use for sacrifices. Perhaps no sin offerings will be made, but other kinds will. I’m not sure.

Both. They were saved by their faith in God’s mercy that he would give them life despite their sins. The mechanism of that mercy was the Messiah’s death, which some of them knew was necessary. I don’t believe they had to know the precise details of what form that mechanism would take, so long as they trusted in God to provide it. I believe the same is true today.

Q: Did they really know who the Messiah would be or what purpose He would serve?

Some of them, yes. I believe Abraham knew after God provided a sacrifice in place of Isaac. He prophesied of the Messiah when he told Isaac, “God will provide himself a lamb for a burnt offering.” (Hebrew for “burnt offering” is olah, which means “an ascending”. It implies something that burns and rises up in smoke, but it could be interpreted as anything that ascends to Heaven.) God actually provided a ram that day, not a lamb. The promised Lamb of God appeared centuries later in the person of Yeshua, was killed, rose from the dead, and ascended to Heaven.

Q: Christ said “believe on me and you shall be saved.” How about those who lived and died before Christ? Did Job appeal to his Maker or to his cousin Abraham’s seed?

Isn’t Abraham’s seed and Job’s Maker one and the same? In order to believe on Christ, no one needs to know the specific sounds that make up his human name (or any facsimile thereof) or even to know that he has already come. They only need to know that they are sinners and hopeless in themselves and to trust in (“believe on”) God to provide the means of their salvation. That means is Yeshua, but Job didn’t need to know the name of the Messiah nor the specific time or place of his birth. He just had to trust God to take care of it.

Q: Another very odd thing about the Scriptures is that they almost always, when properly translated (such as in the KJV, remarkably enough), say that the faith OF Christ shall save us, not our faith IN Christ. Now isn’t that strange?

The limitations of human language. We cannot possibly be really saved by any actions or thoughts of our own. Salvation is provided solely by God based on his own criteria. Fortunately, he has promised that salvation to us based on certain conditions which do not include physical obedience to any law.

Q: And what of Mark 9:24, where the man says “I believe. Help my unbelief.” How does a man need help believing if he is already fully convinced?

Is anyone ever fully convinced of anything? I trust and believe, but sometimes I still have doubts.

Romans 7:15-17 For that which I do I allow not: for what I would, that do I not; but what I hate, that do I. If then I do that which I would not, I consent unto the law that it is good. Now then it is no more I that do it, but sin that dwelleth in me.

There are so many questions concerning spiritual matters for which we only have unsatisfactory answers, at least intellectually. But this is one of the greatest things about God and his plan for our salvation. It doesn’t matter how smart you are, how well you can wrap your mind around the incomprehensible details of an infinite God. What matters is that you are able to perceive and admit your own imperfections and to trust in Him, and our capacity to trust is not tied to our capacity to reason.