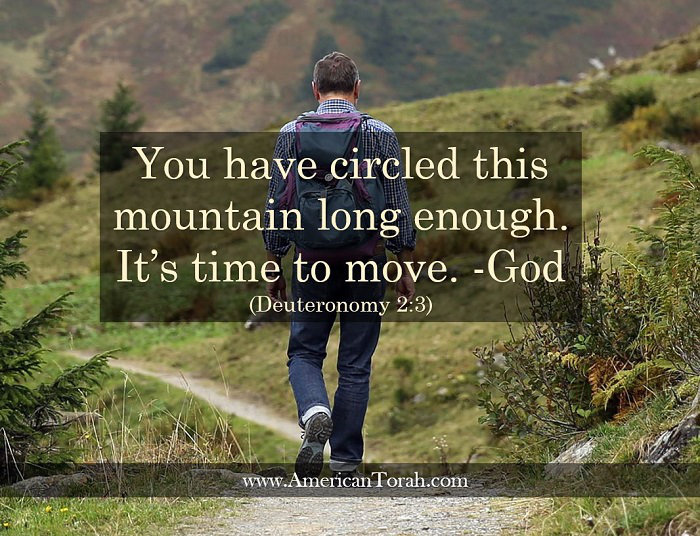 When some people prepare for a road trip, they spend weeks planning, packing, and making checklists. Other people throw some clothes in a backpack and hit the road without so much as a route mapped out in advance. Based on my own experience, I know which one I’d bet on reaching their destination and having more fun while there, but to each his own.

Of course, some journeys require more planning than others. There’s going to the grocery store and then there’s going off to college. Unfortunately, sometimes we don’t know which is which and sometimes there’s just no time for thorough planning.

The Hebrews spent a lot of time moving from place to place in the wilderness. They spent very little time preparing for each move, but those moves didn’t require or allow extensive planning. Is the cloud moving? Then it’s time to go. But on either side of their wilderness journeys there were two moves that were of a very different sort.

God gave them one day to get ready to leave Egypt and had them prepare by asking their Egyptian neighbors for silver and gold. God told Moses to tell the people, “Go ask your neighbors for money. God is sending one more plague tonight, and Pharaoh’s going to let us go in the morning.” They didn’t have years to save their pennies or to collect survival gear. They didn’t have weeks to pack up for the movers. They had one day.

Which was more than Yeshua gave to his disciples one time:

And he called the twelve and began to send them out two by two, and gave them authority over the unclean spirits. He charged them to take nothing for their journey except a staff–no bread, no bag, no money in their belts–but to wear sandals and not put on two tunics. And he said to them, “Whenever you enter a house, stay there until you depart from there. And if any place will not receive you and they will not listen to you, when you leave, shake off the dust that is on your feet as a testimony against them.” (Mark 6:7-11 ESV)

Just like with the Hebrews many centuries before, Yeshua wanted to teach his disciples to trust in Providence. When God tells you to go, he will also provide the means. When the “what” is certain, but the “how” seems unimaginable, trust God to provide the means or an alternate route.

God provides. To reinforce that point to the Hebrews, he led them to a dead end, trapped between the sea and Pharaoh’s chariots. Failure appeared certain, yet he made another way. God parted the sea and brought it back together again to drown Israel’s enemies.

Once in the Wilderness, God transformed them from bitter, defeated, and dependent slaves into a cohesive nation with a powerful faith in him. He spent forty years preparing them for their next mission, the conquest of the Promised Land.

If you’ve lived long enough, you’ve learned that no amount of planning can ever account for every possible eventuality. Stuff happens. Roads fork. Children. As Mike Tyson says, “Everybody has a plan ’til they get punched in the mouth.”

At some point, you have to move from planning to execution. You have to stop training, contemplating, brainstorming and start storming castles.

You have been traveling around this mountain country long enough. Turn northward. (Deuteronomy 2:3 ESV)

After an entire generation had died in the wilderness, it was finally time to stop moving from one campsite to another. It was time for Israel to turn north toward Canaan and start confronting the peoples whom God said had lost all claim to the land.

They had the Torah and the Ark of the Covenant. They had the priesthood and new, aggressive set of leaders. They were hardened and free, no longer thinking like slaves. The Hebrews were as prepared as they could ever be and nation after nation fell before them.

And then they came to Jericho.

They looked at each other and asked, “Now what?” It seemed that nothing they had experienced had prepared them for the impregnable walls and well trained soldiers of Jericho.

But that wasn’t quite true. It was true that their swords, slings, and arrows were no more effective than feathers against that wall, but all of their weapons and tactics were the least of their tools. They had one weapon that was mightier than all the armies that have ever existed: faith.

When no weapon was of any use, they obeyed God. They marched, blew trumpets, marched some more, and then shouted for all they were worth. Against all reasonable expectations, Jericho’s walls collapsed before the weight of their faith and the city was theirs.

Planning and preparation is important–nothing about any of these stories should lead you to believe that God doesn’t want you to prepare for life or ministry–but planning isn’t everything. Eventually you have to stop circling the mountain and turn northward.

When God told the Hebrews to ask their neighbors for traveling money, when he told them not to fear Pharaoh, when he told them to move from camp to camp, and when he told them to march around Jericho he was preparing them by building their faith in him. Without faith, all of our plans and maps will come to nothing. Whatever we might accomplish in life, wherever we think we have gone, without faith in God and the obedience that inevitably follows it, it will all turn to dust before the end.

On that day, when everyone and everything is getting punched in the mouth, only those things solidly built on a foundation of faith and obedience to God will survive.