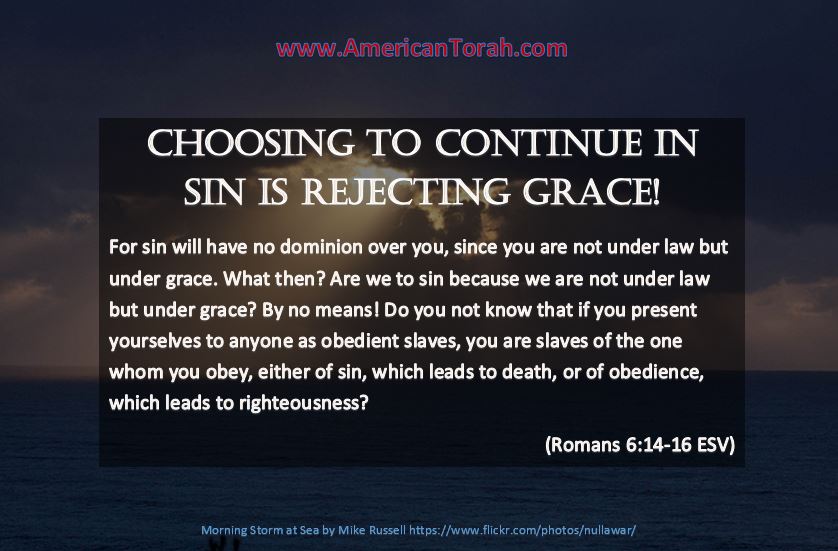 This is from a conversation I had on Google+ today, but I thought it deserved to be preserved here at American Torah.

Paul wrote “What then shall we say? That the law is sin? By no means! Yet if it had not been for the law, I would not have known sin. For I would not have known what it is to covet if the law had not said, ‘You shall not covet.'” in Romans 7:7. The word for “law” is nomos, which is the same word used throughout the Septuagint to translate the Hebrew “torah”.

John wrote, “Everyone who practices sin also practices lawlessness, for sin is lawlessness.” in 1 John 3:4. His word for “lawlessness” is anomia, which literally means “non-law” or “a condition of being unlawful”. It’s the same word used by Matthew to describe people who break Torah. The KJV renders that phrase “for sin is transgression of the law.”

We have inherited a terrible misunderstanding of the phrase “under the law” as well as of James’ discussion of law and faith. This misunderstanding generates a “nomophobia” among many Christians, in which any mention of “law” or “torah” triggers a fight-or-flight reflex.

In reality, Torah and grace work together. Grace is God’s forebearance of our sins, His willingness to forgive us for our shortcomings. However, the word “sin” has no meaning without Torah for, as John pointed out, sin is Torah-lessness. Everyone sins. Except for the one man, Yeshua, every person who ever lived has violated Torah. Yet, by God’s grace alone, we don’t have to be condemned because of it.

Even after being born again into life with Yeshua, we continue to sin. Very few Christians would disagree. Paul wrote about this struggle in Romans also. Yet, how is it possible to break a law that doesn’t apply to you? Can an Australian break an American traffic law without stepping a foot out of Australia? That’s absurd! But that’s the gist of the argument that says it’s possible for a Christian to sin against a law that no longer applies to him. They might equivocate on the definition of “sin”, but I think Paul, John, and James do a pretty good job of establishing it’s meaning. And a very few people might assert that it’s impossible for a Christian to sin, but that’s so obviously unscriptural it hardly needs refutation.

There are three ways a person can live and only one of them leads to life.

In none of these cases is a person free to behave as he chooses. The first person does what he wants and earns eternal damnation. The second person tries to earn his salvation through his behavior and inevitably fails. He too earns eternal damnation. The third person recognizes his inability to live a perfect life and throws himself at the mercy of the Heavenly Court. Then, having been granted grace by God who is eager to forgive, he doesn’t throw it in the trash by going on to live as if God had no standards whatsoever. He’d soon find himself in the same boat as the lawless pagan. Instead, he shows his gratitude for God’s grace and his love for his Creator by studying God’s instructions and applying them to his everyday life, “working out his salvation in fear and trembling.”

In summary, there is no difference between grace and following Torah. Indeed, to reject Torah is to reject grace also.