He said to them, “This is what the LORD has commanded: ‘Tomorrow is a day of solemn rest, a holy Sabbath to the LORD; bake what you will bake and boil what you will boil, and all that is left over lay aside to be kept till the morning.’” So they laid it aside till the morning, as Moses commanded them, and it did not stink, and there were no worms in it. Moses said, “Eat it today, for today is a Sabbath to the LORD; today you will not find it in the field. Six days you shall gather it, but on the seventh day, which is a Sabbath, there will be none.” On the seventh day some of the people went out to gather, but they found none. And the LORD said to Moses, “How long will you refuse to keep my commandments and my laws? See! The LORD has given you the Sabbath; therefore on the sixth day he gives you bread for two days. Remain each of you in his place; let no one go out of his place on the seventh day.” So the people rested on the seventh day.
Exodus 16:23-30

Before Israel arrived at Sinai, before God had spoken a single word from the mountain top or carved a single letter on the stone tablets, he said, “How long do you refuse to keep my mitzvot and torah?” God expected Israel to obey his laws, specifically the Sabbath in this case, before he had a covenant with them, before Sinai.

Before that, God commended Abraham for heeding his call, keeping his charge, his commandments (mitzvot), his statutes (khukot), and his laws (torot). Most people interpret that to mean the seven Noahide laws, but Noah certainly had more laws than those.* How else would he know what animals were clean and unclean? God’s Law (also known as the Torah) existed from the beginning. How else did Abel know what kind of animal to sacrifice, and how should Cain have known that his sacrifice would be unacceptable? How did Judah know about Levirate marriage?

God’s laws are eternal and not tied exclusively to any particular covenant, although they are included as terms of the covenant with Israel at Sinai. When you enter your neighbor’s house, he expects you to observe the rules of his house: don’t play football in the living room, don’t put your feet on the furniture, don’t open the refrigerator without an invitation, etc. This doesn’t mean that he invented those rules the moment you walked in the door. They were always the rules of his house because they are a part of his character. He doesn’t have anything against your shoes in particular; he just doesn’t like it when people put their shoes on his sofa. God’s laws are the same; they are a reflection of his character. They differ from our own because where our personal rules evolve with our character over time, God’s do not. One can make a case (a very weak case, in my opinion) that God invented the laws concerning tabernacle rituals and the Levitical priesthood arbitrarily or only for the specific nature of the Israelites, but one cannot make the same case regarding Sabbath, animals that are acceptable for food and sacrifice, acceptable and unacceptable relationships, and behavior toward your neighbors. God’s standards in those matters all clearly existed before Sinai and will continue to exist so long as heaven and earth remain.

There are passages in the Apostolic scriptures that appear at first reading to disagree, especially the writings of Paul: Romans, Galatians, Colossians, etc. When I tell people that I believe we should keep the Torah, they quote these scriptures to me as if they think I haven’t read them before. The bare truth is that most of those people never got passed a Sunday School level of Scriptural understanding. Torah contains the key to advancing that understanding if they would be willing to examine it a little more closely.

First, it lays out its dualistic nature.

I call heaven and earth to witness against you today, that I have set before you life and death, blessing and curse. Therefore choose life, that you and your offspring may live. Deuteronomy 30:19

Second, Torah states unequivocally that nobody is authorized to change it in any way.

And now, O Israel, listen to the statutes and the rules that I am teaching you, and do them, that you may live, and go in and take possession of the land that the LORD, the God of your fathers, is giving you. You shall not add to the word that I command you, nor take from it, that you may keep the commandments of the LORD your God that I command you. Deuteronomy 4:1-2

It doesn’t get much plainer than that. The orthodox Christian view of the Bible for almost 2000 years is that it must agree with itself. No part of the Bible contradicts another part, and the clear passages must be used to understand the less clear. In various places, Jesus, James, Peter, and Paul all reiterate the point of Deuteronomy 4:2 in fairly unambiguous terms. Take Jesus’ words in Matthew 5, for example:

Do not think that I have come to abolish the Law or the Prophets; I have not come to abolish them but to fulfill them. For truly, I say to you, until heaven and earth pass away, not an iota, not a dot, will pass from the Law until all is accomplished. Therefore whoever relaxes one of the least of these commandments and teaches others to do the same will be called least in the kingdom of heaven, but whoever does them and teaches them will be called great in the kingdom of heaven. Matthew 5:17-19

Do we then overthrow the law by this faith? By no means! On the contrary, we uphold the law. Romans 3:31

We must think very carefully about those passages that appear to be teaching in direct contradiction to the words of Moses, Jesus, and Paul, resisting the urge to interpret them in a way that makes large portions of the Scriptures to be meaningless or worse: lies.

To get back to the Sabbath, judging by the amount of text devoted to the topic, God cares very deeply about it, whether we understand why or not. It was among the first rules that God gave to Israel after they left Egypt, and He said that it will always be a special sign of God’s people. Keeping it on the seventh day as God commanded can be difficult at times in a culture that doesn’t cooperate–not difficult in the sense that it’s laborious, but in that lifelong habits are difficult to change and the rest of the world won’t rearrange its schedule to accommodate you. But I assure you that making a concerted effort to keep a seventh day Sabbath will be worth the inconvenience.

If you are unsure about whether or how much of God’s Torah you should keep, consider starting with the Sabbath. Don’t worry about getting it perfect and don’t worry about all of the complex rules that the rabbis have piled onto the simple day of rest that God prescribed. If you haven’t done it before, just start with this: between sunset on Friday and sunset on Saturday, don’t do anything that feels like work to you. If there is something you feel that you must do, relax about it. Don’t get yourself fired from your job or put anyone in danger, but take it slow and easy. After you’ve done this for a few weeks, come back to the blog and let me know how it’s going. 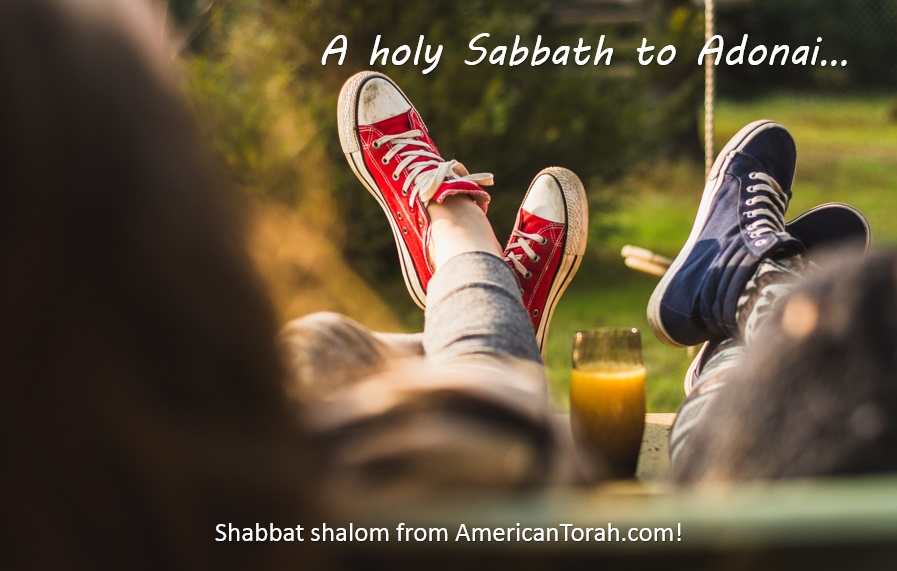 * Although based on Biblical principles, the Seven Noachide Laws are a man-made code imposed on the Biblical text. They were probably not codified until thousands of years after the Flood.