Two weeks ago, I wrote about how Esau wanted to do the right thing but never stopped to ask what that was.

Last week, I wrote about some of Jacob’s encounters with angels and his trust in God.

This week, I’m going to beat up on Esau again, and not just Esau, but his descendants too.

Esau was a man of passion. That isn’t a bad thing. Any self-help guru worth his salt will tell you that passion is a basic ingredient of success. It just needs to be balanced with self restraint.

When he was young, Esau was ruled by his passions. His physical urges drove him to make foolish decisions that he would later regret. He was hungry, so he traded his birthright for a meal. He wanted a woman, so he went out and got himself two of them. 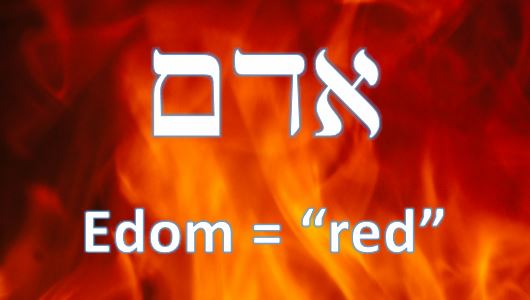 Fortunately, as Esau aged, he learned to reign himself in. His desires drove him to obtain the seeds of wealth, while his late learned discipline allowed him to keep and develop them into a substantial sum. By the time Jacob returned from Haran with his family, Esau had accumulated large herds and an army of servants. When they met east of the Jordan, they met peacefully. When Jacob resisted Esau’s attempts to assimilate his family into his own, Esau didn’t respond with anger or force, but went on his way.

Unfortunately, he passed his impetuous tendencies onto his children.

These are the kings who reigned in the land of Edom [another name for Esau], before any king reigned over the Israelites.(Genesis 36:31 ESV)

At first reading, this verse sounds like the Edomites were a great success, and in many respects they were. While the Hebrews were slaves in Egypt, Esau’s descendants became kings and their kingdom lasted for more than a thousand years. But examine the list of Edomite kings in the following verses:

These were kings, not judges in the style of Israel, yet not one of them was the son of the previous king. A scepter rarely passes from one man to another who is not close blood relative without violence. The Edomite culture was one of violence and upheaval, each regime wresting the kingdom from the one before and taking the people in a new direction. Like their father, Esau, the Edomite kings saw what they wanted and took it.

When Moses asked the King of Edom if the Hebrews could pass through their land on their way to their own homeland, their king refused and threatened to attack if they crossed the border. The people of Israel even offered to pay for any resources they might use. The Edomites responded by sending an army. One interesting aspect of this exchange is that after the initial communications, the conversation is described as happening between Israel and Edom, alternate names for Jacob and Esau (Numbers 20:21). The Edomites followed Esau’s pattern of responding to Israel’s return to the land with a show of force, but unlike Esau, the Edomites had not learned to temper their immediate passions for the sake of future material gain.

The end result is easy for us to see today. The Jews maintained themselves as a distinct people even without a homeland for thousands of years and have reestablished themselves as an independent state, while the Edomites were completely absorbed by the surrounding peoples, including the Jews, during the time of the Romans. Their land is the harshest desert now, occupied by Israel and Jordan.

All of our base physical urges–hunger, desire, ambition, etc.–are good things. God built them into us and we wouldn’t be human without them. But be careful and remember Esau. He is a warning to everyone. Don’t look for the easy way or the fast way. Seek wisdom, not gain, and gain will follow in time. Teach your children to act boldly, but always to consider tomorrow’s consequences of today’s actions. Your great grandchildren will remember the lesson.