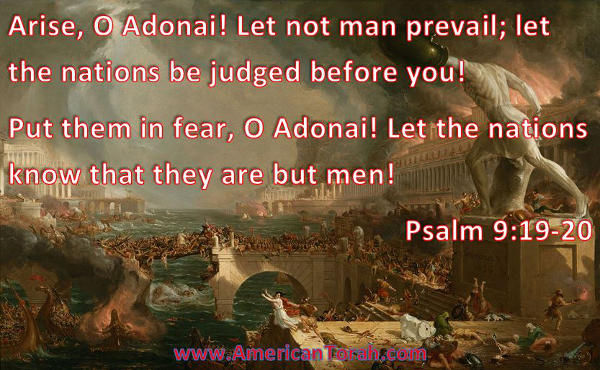 David begins Psalm 9 with an outline:

He proceeds to describe the victories and favoritism God has granted (and will grant) him, then to invite the people of Zion to join him in singing God’s praises, and finally to make several observations about the relationship of God to men that reveals the characters of both.

In the final segment, David focuses on the futile nature of mere men thumbing their noses at an omnipotent Creator.

Scheming for relative advantage is one of the favorite activities of the wicked, and they are often very good at hiding both their actions and their motives. They set traps for the unsuspecting, hoping to tear people down to make themselves look higher, or to take advantage of someone else’s fall in order to promote their own interests.

If you are ever unsure about the character of someone, watch how he treats people who are less capable or less “sophisticated.” Does he hide the flaws of a product in order to pass the expense of future repairs on to a future owner? Does he make loud promises of gains for everyone, but somehow only ever enriches himself?

No matter what a person says or appears to do, pay attention to the end result of his personal and business dealings. If people who trust him regularly lose, while he keeps going along as if the fault is always someone else’s, watch out. Eventually he’ll fall into a trap of his own making and take with him anyone who is standing too closely. (Remember Korah!)

Death is a great magnet, pulling on men’s souls. Like iron, the evil that infects us and drives us to work toward the destruction of others inevitably pulls us back to its point of origin. David says that the wicked “shall return to Sheol,” and how can they return to something from which they haven’t already come?

Don’t, however, confuse entrapment with giving someone enough rope to hang themselves. It’s one thing to set traps for the unsuspecting. It’s another thing altogether to stand back and let someone destroy themselves by their own blundering or scheming.

The difference between these two competitive strategies draws a clear line between the character of God and the character of mere men. God doesn’t set out to destroy us, but He knows our faults, and has designed the Universe in such a way that those who seek to destroy others will eventually be destroyed by the very weapons they use against others. He knows the End from the Beginning and can never lose a game that He designed for His own purposes.

He will never abandon his faithful who are oppressed by the wicked. He is a God of Life and He will not allow those who put their trust in Him to be swallowed up by Death.