1 Timothy 1:9 is a favorite verse of those who say that the Torah doesn’t apply to believers in Jesus. It’s a very poorly thought out position, however, because it’s contradicted by the very same verse.

(8) Now we know that the law is good, if one uses it lawfully, (9) understanding this, that the law is not laid down for the just but for the lawless and disobedient, for the ungodly and sinners, for the unholy and profane, for those who strike their fathers and mothers, for murderers, (10) the sexually immoral, men who practice homosexuality, enslavers, liars, perjurers, and whatever else is contrary to sound doctrine, (11) in accordance with the gospel of the glory of the blessed God with which I have been entrusted.
(1 Timothy 1:8-11)

What does this passage actually say?

In other words, the Law was written down because people weren’t keeping it, therefore the Law no longer applies to us and we don’t need to keep it. Wait…what? That doesn’t make sense! How did this very clear passage come to be understood to say something completely opposite of what it actually says?

Paul often wrote of one aspect of Torah or another, assuming that his readers understood the context. This can be very confusing for people separated by enormous barriers of time, culture, and language. We only have one side of these conversations and partial records at that.

The truth is that Torah serves multiple purposes. It is tutor, friend, and jailor. It is both life and death. Which role it fills at any given moment depends on where you are in your life’s journey and how far you are from your Creator.

The Hebrews’ journey from Egypt to Canaan illustrates some of Torah’s shifting roles. They were slaves in Egypt until God saved them by making a way through the Red Sea. In the wilderness, they received the Torah, developed a relationship with God, and trained in the ways of faith and righteousness. Finally, God made a way through the Jordan into Canaan to take possession of their inheritance and begin fulfilling their true calling in God’s plan. 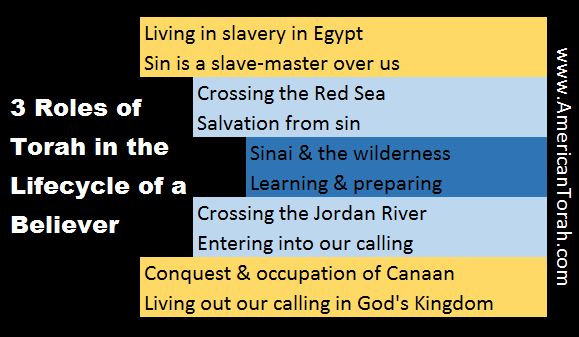 The slavery of the Hebrews in Egypt is like the slavery we all suffer under sin. Torah reveals our low state and prompts us to cry out to God for mercy. It leads us to a knowledge of our need for a Savior, and if we don’t reach out to Him, it is a witness against us at the final judgment. The Hebrew slaves didn’t yet know the details of God’s commands, but like the sinner who hears the call to repent, they knew that they weren’t free. Only when we become aware of our chains and beg forgiveness does God lead us to freedom. He doesn’t demand anything of us at that point except humility and faith. “Stand back,” Moses said at the shore of the Sea, “and behold the salvation of Adonai!” With nothing but faith to walk, they crossed the Red Sea and left the defeated Egyptians behind. Sinai was still ahead in the wilderness.

Once across the water, God began to teach the Hebrews how to live. “Keep the Sabbath,” He said, then He led them to Sinai where He tried to write His Law on their hearts. They weren’t ready to receive it as their hearts where still too hard and scarred from sin, so He wrote it on tablets of stone and instructed Moses to write it in greater detail in a book. They spent forty years wandering in the wilderness in the direct presence of God, learning day to day how to live by His standards. This is like our first years as a new believer, learning the basics of righteous behavior and trading old habits for new. It takes time, practice, and discipleship to mature us into adults who can stand on their own.

Finally God said, “You have been wandering on this mountain long enough. It’s time to grow up.” God doesn’t want us to stay in the wilderness forever; it’s just basic training for life in the Promised Land. Israel never could have fulfilled her calling by continually wandering in the desert. Having accepted God’s salvation and then learning His Law, they had to cross the Jordan, dispossess the Canaanites (who had rejected God’s Law), and occupy the land.

When the conquest was complete, Torah would take on a whole new meaning. Many commands state, “When you come into the land that the Lord your God is giving to you, you will…” These commands could not be fully obeyed in the wilderness. No longer having to develop a godly culture from scratch, the Israelites were now to live it in full. Torah gives us the framework and the power to fulfill our true callings in God’s Kingdom, to live productively as a people serving God and as a priesthood to the world. Without it, our relationships flounder and our ministries decay, like the people of Judah before King Josiah revived Torah-living and created a program to reteach it to the nation.

In different stages of our lives, God’s Law serves a different purpose. It can’t enslave someone whom God has set free, nor can it free anyone who is enslaved. Torah is the slave-master of sinners and a wise counselor to the righteous, death to the disobedient and life to the obedient. As Paul wrote, “Now we know that the law is good if one uses it lawfully.”