Man was created to be an intermediary between Heaven and Earth, to govern the lower creation in deference to the higher. To accomplish this role we were given bodies with physical and spiritual components. Our flesh and spirit are intended to work together for maintaining, encouraging, and healing the natural world in communion with our Creator and one another.

When Adam sinned, he introduced signal pollution into both of these communication channels, the upward and the downward. We are no longer capable of effectively stewarding God’s Creation, forced into a situation in which we must extract our sustenance from it without inflicting too much damage. We are no longer capable of seeing God face to face. We must have prophets, teachers, intermediaries of all kinds to go up the mountain for us, because we are unable to endure the divine presence. His voice alone is enough to destroy us.

As a partial and temporary remedy to our spiritual injuries, God gave the sacrificial system, detailed most famously in the book of Leviticus. The khat’at (sin offering) in particular illustrates this point most clearly.

The bronze altar of the Tabernacle had horns on each of the four corners representing a connection to Heaven. The blood of the khat’at animal was collected by the priests and then the High Priest would paint these four horns with it, thereby purifying the entire altar. The remaining blood was poured out at or around the base of the altar, making the altar holy and atoning for (covering) it. The blood on the horns (the connection point with Heaven) and the base (the connection point with Earth) served as a sort of signal filter, temporarily removing the noise from our corrupted spiritual communications and allowing the altar to function on a higher plane.

We are like that altar, intended to be a connection between heaven and earth. Yeshua’s blood, shed on Passover, atones for the sins of all who repent and believe in him, restoring our relationship to God and enabling us to communicate with Him. Since we still inhabit fallen bodies and live in a fallen world, we continue to struggle with sin. We fight our evil inclinations daily, repenting for our failures, and continually appealing to God’s grace for His mercy. Ongoing, unrepented sin causes a breakdown in spiritual communication until we can no longer hear God’s voice at all. 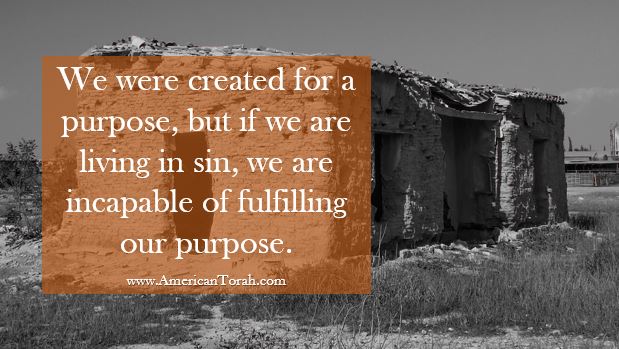 We were created for a purpose, collectively and each of us individually, but if we are living in sin, we are incapable of fulfilling our purpose. Ramses had wealth, fame, and greater military and political power than any other man on earth, yet his great contribution to history is as the Pharaoh whose defiance of God brought Egypt to the brink of extinction. By clinging to our sin, whatever great contribution we might have had to God’s Kingdom could be reduced to an object lesson in what not to do.

I’m not saying that perfect behavior is a condition of salvation. If it were, no one on earth could be saved. I am only addressing our ability to act effectively as God’s emissary. (Deliberate rebellion against God’s commands is something else entirely, and will have to wait for another day.)

Our great hope, the point of our faith, is that in the day of the resurrection, our bodies will be made new despite our personal failings, and we will be permanently transformed along with our relationships to Creator and Creation. We will be enabled to resume our intended place in God’s order as the connection point between Heaven and Earth. Nature will no longer fight us and we will commune freely with God and peacefully with each other.

One Reply to “The Restorative Power of Jesus’ Blood”