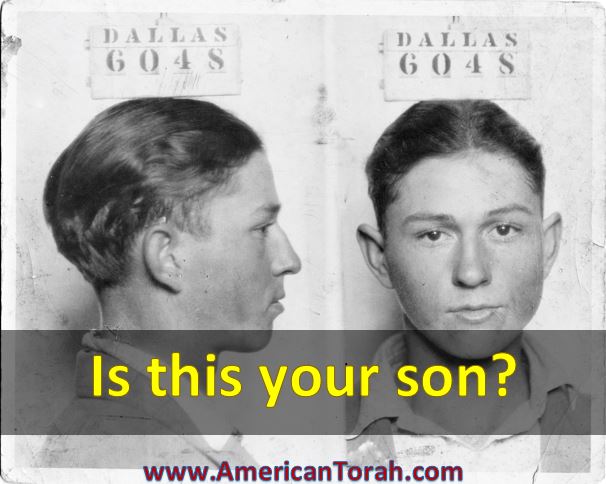 Deuteronomy 21:10-23, like so many passages in the Torah, at first appears to be a random assemblage of rules. When you look closer, however, you might see a pattern emerge:

V10-14 – A man marries a beautiful woman who was captured in war.
V15 – The man now has two wives, one loved and one unloved.
V16-19 – The son of the unloved wife is also unloved.
V20-23 – The unloved son rebels against his father, turns to crime, and eventually becomes a murderer.

A man has gone out to war and returned home with an exceptionally beautiful woman whose entire family has been killed. She has every reason in the world to hate him, and the wife who was waiting for him at home during the campaign is not likely to be pleased either. The man doesn’t love his first wife or it’s very likely he wouldn’t have wanted the second one, certainly not under these circumstances. Competition, complication, and soon: domestic conflagration.

He follows this unwise decision by diminishing the inheritance of his first wife’s (or second, the text isn’t specific) innocent son who responds by rebelling against the rule of both his parents, eventually resorting to crime.

There are two pieces of evidence that point to the prodigal being very young.

First, the character of a grown man isn’t likely to be terribly effected by his father’s foolish decisions. The character of a child, however, can be scarred, strengthened, or warped beyond repair by experiences early in life.

Second, the Jewish sages say that the law concerning stoning a rebellious son was intended to take the boy out of the world before he does something, like murder, that would place his soul beyond all hope. Hence, it would only apply during a six-month twilight of adolescence between childhood, during which time he would not be held responsible for his criminal behavior, and adulthood, when he would be fully accountable for his own actions.*

I’m not convinced the sages were correct in their assessment of the law’s applicability, but I agree that the placement of that command towards the end of this domestic downward spiral indicates that the first domino was toppled by the boy’s father and not by the boy himself. This doesn’t excuse him. The murderer or adulterer or homosexual in verse 22 is still to be executed for his own crimes regardless of what his father did or didn’t do.

The thing I want you to take away from this, the most important thing that is not even written in the text, is that the consequences of your behavior as a man or woman even in the earliest stages of your marriage–indeed even before you marry at all–will ripple through generations of your descendants.

Be very careful in choosing a mate. “Listen to your heart” sounds honest and sweet, but it might be the most foolish advice anyone has ever given. (On the other hand, anyone who takes advice from pop singers probably deserves his fate.) Don’t marry the first girl who bats her eyelashes at you or the first boy who tells you he loves you. Don’t rely only on your own judgment, but seek out counsel from the elders of your community, from people with many more years of experience and wisdom. Your urges, your instincts, your “heart” is far more likely to lead you to destruction than to happiness.

Being in love is wonderful, but marrying someone just because you’re in love is stupid and selfish. The great secret that none of those pop stars will tell you is that you can choose to fall in love and you can choose to allow yourself to fall out of love again. Physical attraction is important, of course, and requires a certain amount of raw material to work with, but beyond the mere physical, it takes work to build a quality relationship and it takes even more to maintain it. If you aren’t willing to carry some heavy burdens, my advice to you is don’t even start down the road.

Don’t try to be ready for marriage and family before you start. You will never be ready for marriage or children or any other great thing in life until you are well into it, maybe not until it’s long over. Rather, get used to the idea that you won’t be strolling through flowery meadows ever after. There will be cliffs and rivers and mountains to cross. You’ll need determination, and more than anything, you’ll need a map and good directions.

Your stupid decisions today could be devastating for your children ten or thirty years from now. Keep your eyes and ears open, and walk prayerfully.

* Incidentally, the rabbis also say that there has never been an occassion to put this law to use.