Our men are anemic and our women base. What’s worse is that they seem to be proud of it. They put their filth on banners and scream obscenities in the street at everything virtuous. I see images on social media of people deemed admirable by pop culture, and I am repulsed when I’m pretty sure they mean for us to be attracted.

You should watch a few hours of MSNBC and MTV, and then read Isaiah 3. I have been convinced for a long time that Isaiah 3 very closely matches our society here in America and in most of the European cultural demesne:

Moses was called the most humble man that ever lived, yet he stood up to Pharaoh and led millions through hardship and war. He begged God to spare the people despite their unfaithfulness, he answered their every call for help, and then he directed them in the destruction of entire armies and cities.

David constantly wrote of his own unworthiness and refused to attack the king who God said he would replace and who had tried to kill him. He sang, danced, and played the harp, yet hardened men of war flocked to his side, and he was Israel’s greatest general and king. He killed hundreds of men by his own hand and ordered the deaths of many thousands. He wept for his people on one hand, but never shrank from doing what was necessary to protect them on the other.

Deborah stayed out of the limelight except when she was called, and then she led a nation in justice and war by the respect of its people and the blessing of their God. When men failed, Deborah stood in their place and glorified God for the destruction of Israel’s enemies.

Abigail loved her husband in her deeds even if she despised his behavior and character. When his life was threatened by a powerful warlord bent on revenge, she didn’t step aside and gain her freedom. She confronted the warlord and saved her husband’s life. When God took her husband a few days later, she became a queen and an example for women in all ages.

America and the west has very few Davids and Abigails. Those we have are banned from the public square. But if we are to survive, then we must turn the tide. We must repent and turn back to God’s Law en masse. We have to stop making excuses for why God’s Law no longer matters.

“Oh, Jesus has already forgiven all the sins I will ever commit, so all that preachiness is straight from the Devil.”

Yeah, you just tell him that when you meet him. Do you remember what he said about peole who reject God’s Law? I quoted it last week:

And then will I declare to them, ‘I never knew you; depart from me, you workers of lawlessness.’ -Yeshua (Matthew 7:23 ESV)

The solution to Israel’s problem in Isaiah 3 is repentance. Only then does the tide turn, and “In that day the branch of Adonai will be beautiful and glorious!” (Isaiah 4:2)

I don’t know exactly where you are in your life, but I know that you’ve been telling yourself that God doesn’t really care about something you’ve been doing. “Has God really said…?” you keep asking yourself, but you already know the answer. I know because I do the same thing. We all do. But don’t ask God to tell you what to do in a matter on which he has already spoken.

America isn’t Israel, of course, but many who are of Israel are Americans, and the burden truly to transform our society rests squarely on us. We can’t expect those who are lost in rebellion to turn around without someone to lead them.

Do you want a Moses to lead you in revival? Then become Moses.

Do you want an Abigail to show you how to be a wife and mother of great honor? Then become Abigail.

Take that one thing in your life that you know can’t possibly please God and commit to doing it differently. Pray earnestly and consistently for God’s help and be willing to accept that help when he sends it. He will show you the answers if you are willing to see them, and his answers to your personal issues frequently come from unexpected places. Don’t tell God how he is allowed to communicate.

Moses didn’t become Moses overnight. He spent a long time working out his issues in the desert before God sent him to lead the Hebrews out of Egypt. David had to fight his lions and bears before he faced the giant, and Goliath wasn’t his greatest foe.

Don’t expect too much from yourself too quickly. You will fail at times, but it will be okay. Just keep moving forward, one step at a time, patiently but surely, supporting one another without condemnation, and relying solely on God’s Grace for your salvation and certain victory. God will honor your faith and obedience.

Fear God and keep his commandments. There is no other way to make America or any other nation great again in any way that matters. 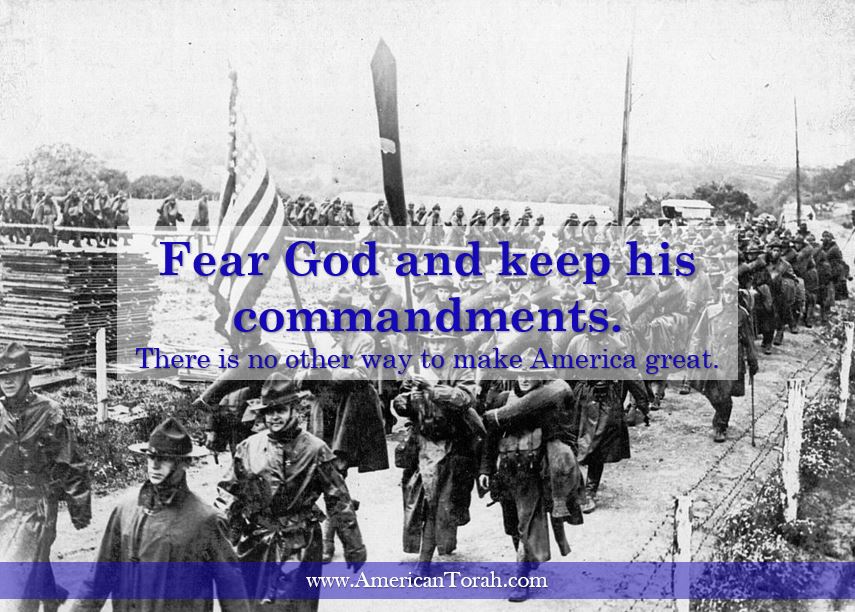 Deuteronomy 31:1-8  And Moses went and spake these words unto all Israel.  And he said unto them, I am an hundred and twenty years old this day; I can no more go out and come in: also the LORD hath said unto me, Thou shalt not go over this Jordan. The LORD thy God, he will go over before thee, and he will destroy these nations from before thee, and thou shalt possess them: and Joshua, he shall go over before thee, as the LORD hath said. And the LORD shall do unto them as he did to Sihon and to Og, kings of the Amorites, and unto the land of them, whom he destroyed. And the LORD shall give them up before your face, that ye may do unto them according unto all the commandments which I have commanded you. Be strong and of a good courage, fear not, nor be afraid of them: for the LORD thy God, he it is that doth go with thee; he will not fail thee, nor forsake thee. And Moses called unto Joshua, and said unto him in the sight of all Israel, Be strong and of a good courage: for thou must go with this people unto the land which the LORD hath sworn unto their fathers to give them; and thou shalt cause them to inherit it. And the LORD, he it is that doth go before thee; he will be with thee, he will not fail thee, neither forsake thee: fear not, neither be dismayed.

Moses told the entire nation of Israel not to fear, to know that God would be fighting with them. Then he took Joshua aside and told him the same thing.

God does not allow a fearful man to fight in his army because fear is contagious. If one man runs, the man next to him might run as well. And if the fear a soldier on the line is dangerous, how much more is the fear of a general? If Joshua showed fear after hearing God’s promises, it would sweep through the ranks like wind.

Fortunately, faith is also contagious. It is doubly important that leaders lead in faith and not in fear. If he stands strong, his men will stand strong. If he runs, then his men will run.

Fear not, neither be dismayed. Do what is right, and God will take care of the consequences. He will be with you. He will not fail you or forsake you.