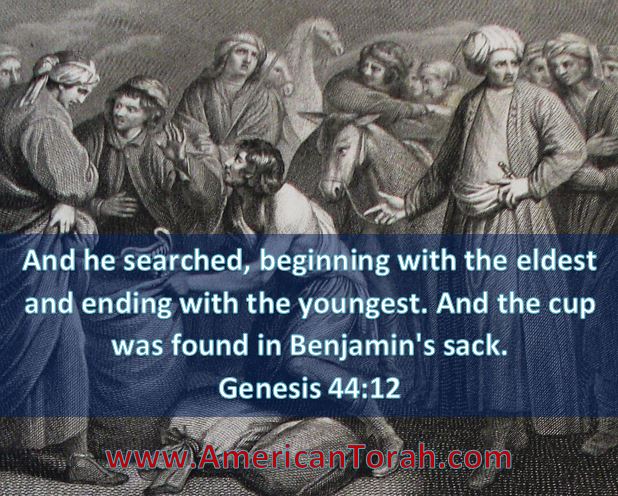 Benjamin wasn’t a thief, but Joseph’s cup was found in his sack. As soon as Joseph’s steward found the cup, everyone knew that it had been planted there and Benjamin had been framed. But why would Joseph do such a thing?

When they were brought before Joseph, Judah, Jacob’s fourth son, who had all but abandoned the family in order to pursue his fortune in the world, became the family spokesman. The coldly pragmatic course would have been to disavow all knowledge of the cup and let Benjamin take the fall–He did appear to be the target of the frame-up, after all–and the rest of the brothers would be saved.

Fortunately for everyone, Judah chose another route. Whatever the purpose of Joseph’s scheme, Judah had had enough of brother turning against brother. He was determined that they would all stick together no matter the consequences. When Joseph refused to punish them all for the crimes of one, Judah offered himself in Benjamin’s stead.

It was the sign that Joseph sought, the sole aim of hiding the cup in the sack and bringing them all back to Egypt under threat of slavery or imprisonment. Joseph wanted to see if his brothers had truly repented of the jealousy and violence that had caused them to betray him so many years before. Seeing Judah’s desire to protect both Benjamin and Jacob even at the cost of his own life, Joseph wept and revealed himself as their long lost brother.

If Judah had allowed Benjamin to be punished or had betrayed any selfishness in his motives, Joseph would have continued to hide his identity and might have punished them all. The pragmatic approach of sacrificing one brother for the sake of ten would have backfired, and they would have lost everything. The story of the Hebrews in Egypt would have been very different.

The question of “Why do bad things happen to good people” has plagued believers since the beginning of time, but the answers–however difficult to accept–have been available just as long. Very often, bad things happen to good people in order to help the weak to become strong, for the faithless to learn faith, or to provide opportunities for those who have been blessed to pass on their blessings to those who have not. Sometimes an innocent person might appear guilty so that someone else will have the opportunity to defend him or to develop his faith in God or his ability to lead God’s people.

The Bible isn’t a book of soft and easy answers. The truth–like God’s methods of character development–can be hard. If you want the easy route, the safe route, Torah isn’t for you. However, if you long for the greater blessings that await those who persevere, who choose the true path over the pragmatic one, keep digging. The truth goes deep.