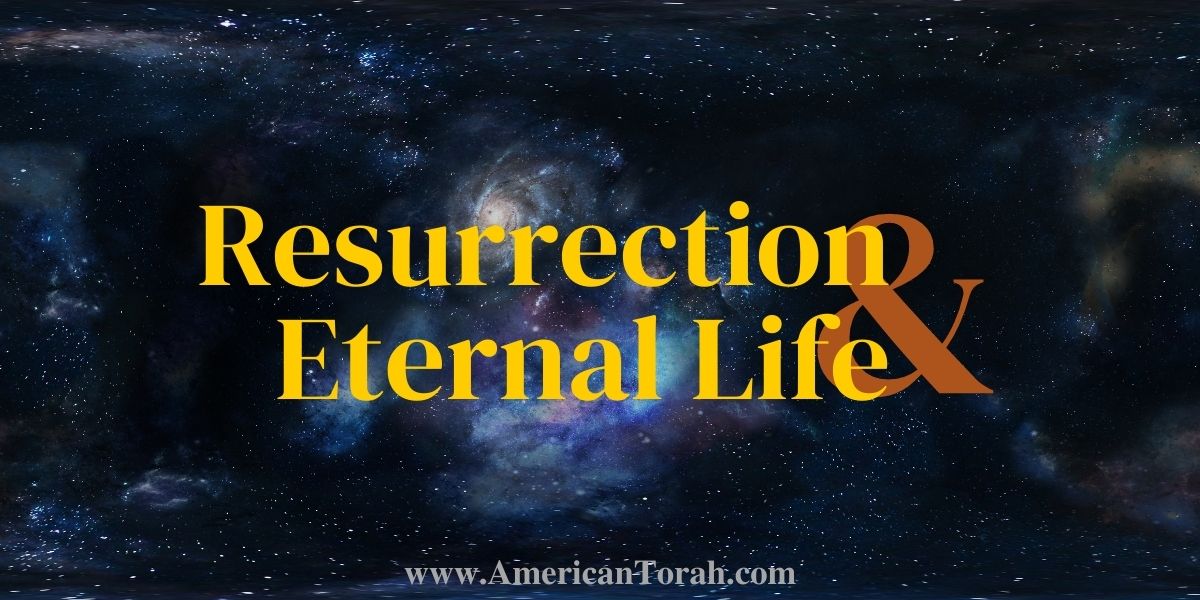 As you read, you might want to refer back to these two articles:

Resurrection in the Bible is a very big deal. Yeshua (aka Jesus) is our savior and the only way to be reconciled to our Heavenly Creator and Father, but resurrection is central to the very meaning of salvation. When Yeshua saves us, he saves us from the eternal consequences of our sins and allows us to be resurrected into eternal life in God’s presence. The Bible talks about resurrection from beginning to end. It is described or discussed in many passages, and hidden by metaphor and allegory in many more.

On one hand, what we believe about our own resurrection and what happens afterward has very little bearing on our eternal salvation. We will be resurrected whether we understand that it will happen or not, and we will receive eternal life if we have lived believing in Yeshua and the promises of God whether we completely understand all of those promises or not.

Remember that the Sadducees didn’t believe in the resurrection, and that led them into many other errors. Yeshua and the Apostles thought that teaching about the resurrection was important enough that they repeatedly came into conflict with the Sadducees over it, risking imprisonment, beatings, and even death!

And as they were speaking to the people, the priests and the captain of the temple and the Sadducees came upon them, greatly annoyed because they were teaching the people and proclaiming in Jesus the resurrection from the dead.
Acts 4:1-2

Now when Paul perceived that one part were Sadducees and the other Pharisees, he cried out in the council, “Brothers, I am a Pharisee, a son of Pharisees. It is with respect to the hope and the resurrection of the dead that I am on trial.”
Acts 23:6

In my previous article on the afterlife, I established from Scripture a rough idea of what happens to a person after he dies: his spirit goes to one of the regions or chambers of Sheol to await resurrection. In this article, I’m going to pick up where that one left off and examine what Scripture says about the resurrection itself and what happens after that.

There are many resurrections recorded in the Bible, but most of them were temporary. A person died, was brought back to life, and then presumably died again sometime later.

There is no indication in Scripture that any of those people are still alive today or that their resurrected bodies were incorruptible as Paul describes in 1 Corinthians 15. If they had been made immortal or if they had ascended into Heaven like Yeshua, I’m certain that some mention would have been made of that. It’s much more likely that their spirits were returned to their former bodies, which were healed of any injuries and corruption and then grew old and died again as do the bodies of all other people.

Yeshua’s resurrection was different. He was raised from the dead in a glorified body and then rose through the clouds to heaven in his physical form. Unlike the rest of us, his body didn’t return to the dust of the earth.

For you will not abandon my soul to Sheol, or let your holy one see corruption.
Psalms 16:10

He left the grave with the same body that was crucified, but it was transformed. As I will show, this allowed him to prefigure two groups of believers at the end.

Appointed unto Men Once to Die

If those who were resurrected in years past were destined to die again, how should we understand this verse in the Letter to the Hebrews?

And just as it is appointed for man to die once, and after that comes judgment…
Hebrews 9:27

This is a statement of general principle, not an absolute law. It’s similar to saying that “what goes up must come down”, but we all know that some things go up and never come back down. Numerous spacecraft have left the earth and never come back. Those few exceptions don’t negate the principle that anything thrown into the air will be pulled back to the ground by gravity. Without some continuous force keeping it from falling, it will fall.

In the same way, all those resurrected before Yeshua’s return have been thrown up from the grave, but the inevitable effects of entropy and the continual pull of Sheol eventually bring them back down again. They returned to life and their families, but continued to age until they died and were buried once more.

Scripture itself describes a “second death” in Revelation 21:

But as for the cowardly, the faithless, the detestable, as for murderers, the sexually immoral, sorcerers, idolaters, and all liars, their portion will be in the lake that burns with fire and sulfur, which is the second death.
Revelation 21:8

We can’t read both Hebrews 9:27 and Revelation 21:8 in a strictly literal sense or else they contradict each other. The one describes the usual–though not universal–end of our mortal flesh–while the second is a description of the end of the resurrected, incorruptible flesh of the wicked after the final judgment.

The writer of Hebrews meant that there is no reincarnation. Everybody gets one life, not two or a hundred. Nobody will live, die, and then be born again as a baby to do it all over. This life is not a dress rehearsal. With very few exceptions, men are given one mortal body that lives once, dies, and returns to the earth.

Wait… Backup. “The incorruptible flesh of the wicked”!?

Yes, but more on that later. I’m sorry if this is getting confusing, but I will try to pull it all together at the end.

I am not going to speculate on when, but sometime in the future, Yeshua will return to earth in glory and power with a noise something like a great trumpet or the shout of a multitude.

Then I saw heaven opened, and behold, a white horse! The one sitting on it is called Faithful and True, and in righteousness he judges and makes war.
Revelation 19:11

As Revelation 19 indicates, this will happen after the Beast and the False Prophet have spent some years persecuting and murdering God’s faithful during a period known as The Great Tribulation. When Yeshua returns, “the dead in Christ shall rise first” (1 Thessalonians 4:16). These aren’t all those who died prior to Yeshua’s return, but only those killed by the Beast and his minions.

Then I saw thrones, and seated on them were those to whom the authority to judge was committed. Also I saw the souls of those who had been beheaded for the testimony of Jesus and for the word of God, and those who had not worshiped the beast or its image and had not received its mark on their foreheads or their hands. They came to life and reigned with Christ for a thousand years….This is the first resurrection.
Revelation 20:4-5

These martyrs of the Beast are the first wave of the Final Resurrection, long before the second wave. I don’t believe that their former bodies will be brought back to life, because they will have been killed over the course of several years and their bodies will have decomposed. Instead, these martyrs will gain newly created bodies that will never decompose.

And what you sow is not the body that is to be, but a bare kernel, perhaps of wheat or of some other grain. But God gives it a body as he has chosen, and to each kind of seed its own body.
1 Corinthians 15:37-38

These new bodies will be immortal. Although they have a beginning, they will have no end, reigning at Yeshua’s side for a period of one thousand years (commonly known by some variation of the word “Millennium”) and living beyond that.

At the end of the Millennium, Yeshua will put down a rebellion of the nations, destroy all of the physical universe, and raise all the dead who remain in Sheol. Everyone–great and small, righteous and wicked–will be resurrected and given brand new bodies. Yes, even the wicked will be resurrected at the end.

The rest of the dead did not come to life until the thousand years were ended…
Revelation 20:5

Then I saw a great white throne and him who was seated on it. From his presence earth and sky fled away, and no place was found for them. And I saw the dead, great and small, standing before the throne, and books were opened. Then another book was opened, which is the book of life. And the dead were judged by what was written in the books, according to what they had done.
Revelation 20:11-12

Sheol itself will be cast into Hell and the wicked who have just been resurrected and judged will follow.

The Transformation of the Survivors

All those who were still alive at the time of the Final Judgment will be transformed. They won’t die, but their bodies will be glorified like Yeshua’s. He died and was resurrected, but he didn’t receive a new body. Rather the body he inhabited when he walked the earth was refined and glorified, made immune to death. In this, Yeshua’s resurrection prophesied both the resurrection of the dead and the glorification of the living before the Final Judgment.

Those who are alive at the end will stand judgment alongside the newly resurrected. The faithful among them will go on to eternal life, while the unfaithful will go down to Hell and the Second Death, having passed by the First Death altogether.

The End and the Beginning

Death and resurrection have been with us since Adam first sinned and they are central to God’s plan to refine mankind and restore us to full relationship with him as we once had in the Garden. A few have died and been resurrected temporarily, but everyone who has ever died will be resurrected and everyone who has ever lived will stand together before the throne of God to be judged for eternity.

Those whose names are found in the Book of Life will see a new heaven and earth. What happens after that has not been revealed and has barely even been hinted at so far as I know. I suspect that the time we spent on the first earth is merely trial, a proving ground for our Great Continuation. Life is a furnace and we are all silver ore being refined into something beautiful and useful. The dross will be discarded and the silver retained. What use the Creator will put us to is a mystery that I can’t wait to discover!

Note: You might also appreciate Tony Robinson’s teaching series on Resurrection in the Old Testament.