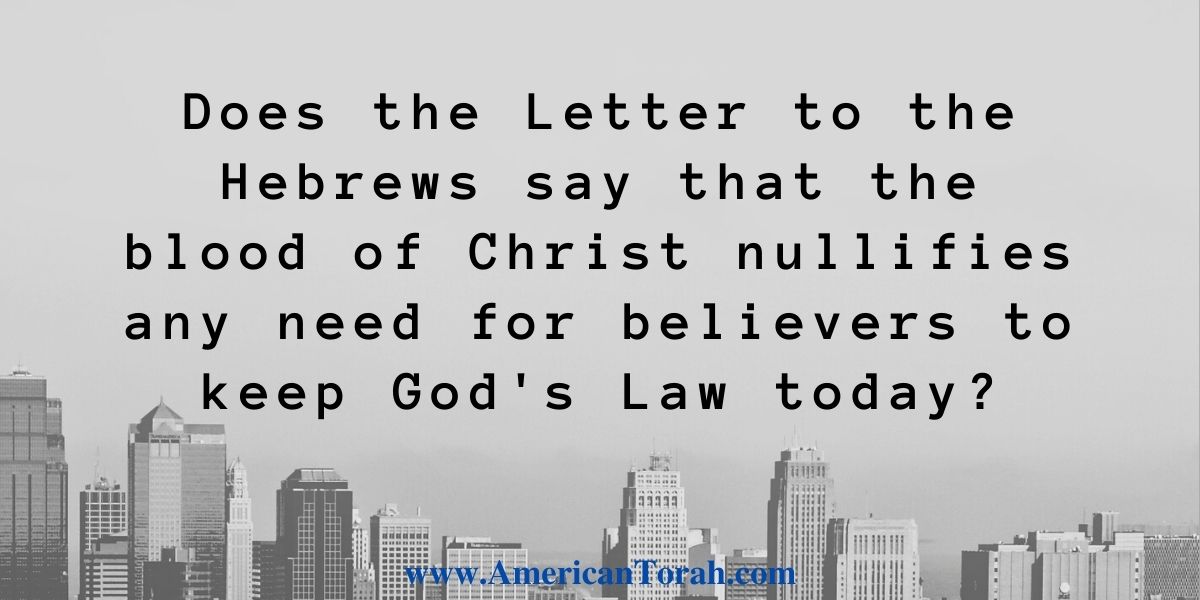 Years ago–sometimes it feels like a previous life–I used to engage any willing theological or political combatant on blogs, forums, and listservs. Not so much anymore. I don’t have the patience for rehashing the same old arguments for the ten thousandth time.

Those years did have a lot of value, though. In defending and supporting my own beliefs, I managed to change my own mind on many topics, I learned an awful lot from digging through the Bible, and I was able to help a very few people with honest questions find some answers. It also produced some great blog fodder. 😉 The post below (in addition to some previous and future posts) came out of one of those discussions…

A commenter using the name “Book of Hebrews” made the following argument against a believer in Yeshua (aka Jesus) keeping Torah today:

Plus there’s that whole crazy thing called…The Book of Hebrews.

“When Christ came as a high priest of the good things that have come to pass, through the greater and more perfect tent not made with hands, that is, not of this creation, he entered, no, not with the blood of goats and of young bulls, but with his own blood, once for all time into the holy place and obtained an everlasting deliverance for us. For if the blood of goats and of bulls and the ashes of a heifer sprinkled on those who have been defiled sanctifies to the extent of cleanness of the flesh, 14 how much more will the blood of the Christ, who through an everlasting spirit offered himself without blemish to God, cleanse our consciences from dead works that we may render sacred service to the living God?”-Hebrews 9:11-14

“Book of Hebrews” should have paid more attention to the Letter to the Hebrews. Look at verses 13 & 14 in the passage he quoted, as well as this one from the next chapter:

Hebrews 10:4 For it is impossible for the blood of bulls and goats take away sins.

Consider what this fact means in light of this passage:

[Abel, Enoch, Noah, Abraham, Sarah, Isaac, Jacob, and Joseph] all died in faith, not having received the things promised, but having seen them and greeted them from afar, and having acknowledged that they were strangers and exiles on the earth….Therefore God is not ashamed to be called their God, for he has prepared for them a city.
Hebrews 11:13 & 16

These great saints lived and died long before Sinai, yet the blood of Yeshua still washed the stain of sin from their souls by way of their faith in God’s providence. The mechanism of their salvation was (is!) no different than that of the saints who lived after Sinai and before Calvary: Gideon, Barak, Samson, Jephthah, David, Samuel, and the prophets. They all lived by faith and are (or will be) raised from the dead because of that faith. They all sacrificed bulls and goats to cleanse their flesh, but they also knew that all of that blood was insufficient to remove all sins from their eternal souls.

This doesn’t mark a change in the Law, merely a continuation. There was always only one way to the Father: faith in his grace to forgive our sins, enabled by the blood of Yeshua. And no amount of faith or grace ever removed the obligation of God’s people to obey his eternal commandments.