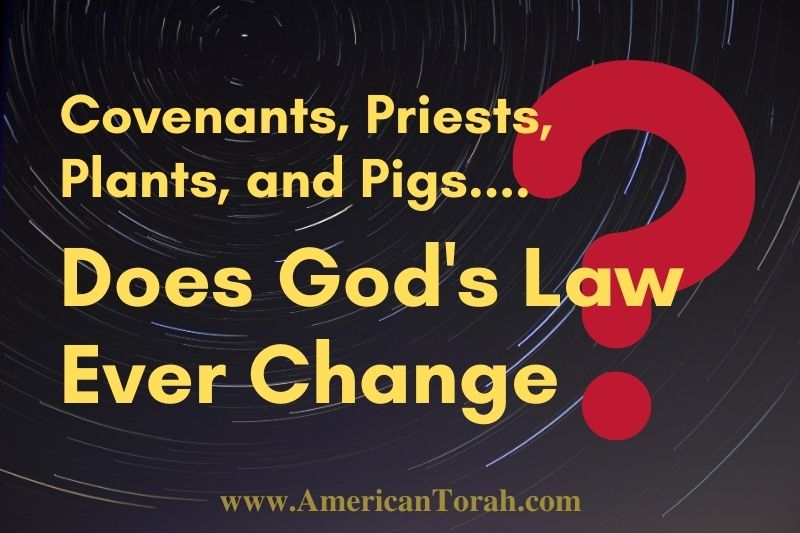 Yet, we have God telling Noah that he can eat animals and telling Moses to set up a national priesthood for Israel and restricting all sacrificial worship to a single location.

Clearly something changed. What gives?

Your mother likes a clean house and she has rules to keep it that way: Take your muddy boots off before you come inside. Don’t eat on the sofa. If she lived in the city, her instructions might include leaving your raincoat and umbrella by the front door. If she lived near a river in the wilderness, she might say to clean your fish and game outside and away from the house and not to leave trash where it might attract bears.

These are your mother’s house rules, but, as you can see, the specific rules she chooses to spell out might be different, depending on circumstances. If she replaces her wood burning stove with a gas fireplace, some of the rules are going to change because the things that the rules governed have changed.

God’s Law Is an Expression of God’s Character

God’s Law and instructions are similar. The rules he gave Moses are an expression of God’s character in a specific set of circumstances. If God gave them today, they might talk about coveting your neighbor’s car instead of his donkey. That doesn’t mean that his Law changes, only that how it was expressed might have been different if it had been given at a different time, to different people.

This is confusing in part because God’s character is too huge, too complex to explain to us in a list of rules, so we have a list of rules, plus lots of stories of how he has interacted with people over time. One thing we can learn by reading the stories in the Bible is that the relationship between man and God requires a priesthood. We are tainted by sin and direct exposure to his presence would destroy us, so we appoint mediators, build altars, and offer sacrifices to facilitate approaching him. (How exactly sacrifices and priests accomplish that is another topic.)

In the patriarchal era, the head of the house or one of the sons would act as the family priest. When God made a covenant with the nation of Israel, that covenant required a national altar and priesthood. Enter the Tabernacle and the Aaronic priesthood. The New Covenant that was hinted at throughout the Torah and made explicit in Jeremiah 31 requires yet another priesthood. In the New Covenant, God’s Law is written on our hearts, and our relationship to him is mediated by the Priest-King Yeshua (aka Jesus).

When Jeremiah said that God’s Law would be written on our hearts, he didn’t mean that the words God gave Moses at Sinai would be literally carved into our flesh, of course. He meant that the principles on which those words were based would be implanted in our minds and spirits so that we would know God’s character instinctively. Nobody will ever need to explain God’s rules to us, because we will simply know them, just as we instinctively know the rules of our own earthly father whose character we have studied since we were infants.

This writing of God’s character, his eternal Law, on our hearts isn’t an instantaneous event. It’s a process that has taken two thousand years so far and will likely never be complete until our Priest-King Yeshua returns to reign in person. There is still so much we don’t understand and even very much that we have forgotten! Clearly we still need to be taught how to behave in God’s kingdom.

As God and Moses carved the Ten Commandments into the stone of Mount Sinai with the fiery presence resting on its head, God, through the Holy Spirit, is now carving his character into us. In a sense, Yeshua’s disciples became the new Mount Sinai in the upper room at Pentecost, with the fire of God resting on their heads too.

In the Sinai Covenant there is a hierarchy within the priesthood. There is one high priest who is the only one authorized to perform some functions, such as entering the Holy of Holies at Yom Kippur. Then there are the sons of Aaron who have some other special duties, such as offering sacrifices on the altar. There are also the Levites, who serve various functions around the Temple and across the nation, but don’t offer sacrifices. Finally, the whole nation of Israel is intended to be a priesthood to the world. In the New Covenant there is also a hierarchy, with Yeshua as our High Priest and every believer acting as a lower sort of priest to the whole world.

These changes in priesthoods don’t represent a change to God’s eternal Law, because they are all in alignment with his eternal character. Rather they represent the application of his Law within the circumstances of a specific covenant.

Another “change” that often confuses people is in our diet. In the Garden, God gave Adam the plant kingdom for food. The plain text says “every plant”, but clearly God didn’t mean every green thing because he explicitly forbade eating from the Tree of Knowledge of Good and Evil. After the flood, God gave Noah the animal kingdom for food.

Did God change his mind about what we could and couldn’t eat?

I don’t think it was that God changed his mind, but that our circumstances had changed so much that a change in the rules was necessary simply to allow life to continue. The Scriptures show that something materially changed in our quality of life after the flood. Lifespans decreased dramatically each generation until we reached a plateau of about 70-90 years. Whether this was due to genetic deterioration caused by increased solar radiation or some other factor is beside the point. However it happened, we are not nearly as healthy as those who lived before Noah’s flood.

I believed that God recognized that if we were going to survive at all, we had to add meat to our diets. Plants alone were insufficient for sustaining the human race, and God’s character dictates that the preservation of life must trump many other considerations. He didn’t change his mind about what we could eat. The principle on which his instructions were based was always to give us what we needed to survive.

No explicit instructions as to which animals could be eaten and which not are recorded in the text of Genesis, so it’s not entirely unreasonable to assume that God gave Noah permission to eat every animal that exists, but I’m convinced that’s not correct. When God told Moses what animals the Israelites were not allowed to eat, he didn’t just say “Don’t eat these.” He said that they are abominable (Deuteronomy 14) and that Israel is also to consider them abominable or detestable (Leviticus 11). Not eating forbidden animals is an important part of being holy, just as God himself is holy (Leviticus 11:44).

Noah knew which animals were clean and which were unclean as offerings to God, which means that God considered those unclean animals to be detestable at the time he told Noah he could eat of the animal kingdom and still does today. God’s character doesn’t change.

On the other hand, if you were faced with a choice between eating pork or starving to death, then by all means, eat the pork. This too is consistent with God’s character. Remember what Yeshua said about healing and rescuing animals on the Sabbath. The preservation and restoration of life supersedes most other considerations.

God’s character–and therefore his deeper, eternal Law–doesn’t change, but how he interacts with us and what instructions he gives us sometimes do change based on changing circumstances.

Priests are mediators between God and men within the context of a covenant. A different covenant requires a different priesthood and this shift is entirely within the character of God and consistent with his Torah as expressed in the first five books of the Bible.

Idolatry, murder, fornication, and theft are clearly contrary to God’s eternal character independent of any covenant, so they will be wrong in all times and places. Despite what you might have been mistaught about these topics from Bible verses taken out of context, eating unclean animals and laboring on the Sabbath are also wrong in all times and places, except where it is necessary to preserve or restore life and relationship with the Creator.

There is a temporal law, the expression of God’s character in a time, place, and circumstance, and there is an eternal law, which are the principles that extend from the unchanging nature of God himself. Whenever it appears in Scripture that God has changed his Law, consider three things: